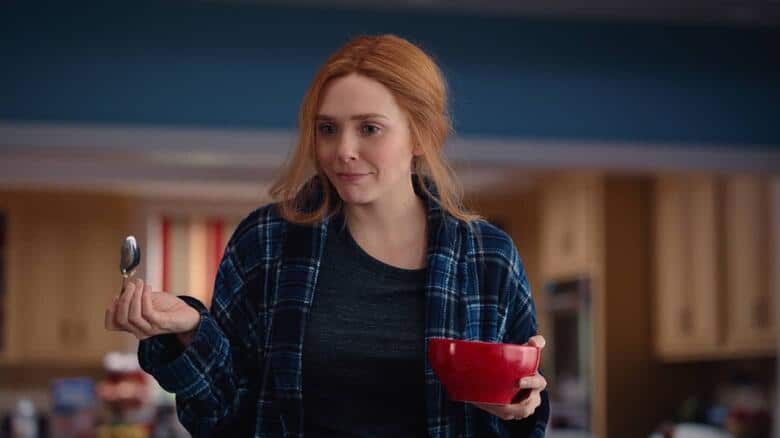 From the ‘Modern Family’ fourth wall break feel to the fact that the features of Wanda’s home are spazzing out to the emergence of an unforeseen entrant into the weirdness, WandaVision has officially set a lot of people back on their heels. People wandered into this show knowing that it was bound to be awkward since we knew that Vision died in Infinity War, that Wanda was a victim of the snap or blip as it’s been called, and that her grief was still apparent, but not all-controlling since at the end of Endgame she appeared at least somewhat calm. But the show has, for the most part, just about erased all of that since Wanda stealing Vision’s body, the sudden realization that the director of S.W.O.R.D. wanted Vision’s body to try to reanimate him, and the fact that Agatha Harkness is now a part of the equation has turned everything around once again. Just when you believed that you had a good handle on everything, Marvel has gone and ripped another rug out from under your feet, not by a retcon, but by revealing someone that was there the whole time and has been masterminding things in a way that kind of begs for an explanation. Oh, and where are the twins?

One might say they were never really there in the first place, but one might also say that Wanda would definitely flip out and do more damage if she wasn’t currently being kept on her heels by everything that’s been happening. The expansion of the hex was a decidedly aggressive move that saved Vision but also trapped several S.W.O.R.D. agents and Marcy, who was turned into an escape artist until Vision woke her up in his own fashion. After stealing a vehicle and filling Vision in on everything he’d missed up to this point, and waiting patiently while Wanda, or possibly Agatha, continued to send distractions to block Vision from returning home, it’s become apparent that the goal of keeping Vision from Wanda is one that could persist to the finale, or build up a final confrontation that will spill into the finale. At this point though, one can’t help but wonder if Doctor Strange is going to make a cameo appearance at some point since thanks to the arrival of Agatha Harkness the story has firmly reached the magical aspect that a lot of people might have been expecting. Whether Agatha is going to be benevolent and in the mood to help Wanda or make things worse, is going to be fun to theorize about.

For those that might not know who Agatha is, she’s yet another magic user in the Marvel universe that’s been around for a very, very long time since she can remember when Atlantis sunk and was around for the Salem witch trials. That should give people a pretty good idea of who this woman is and what she might be capable of, especially if she can manipulate someone as powerful as Wanda. But to be fair, Wanda hasn’t exactly been herself for a while, so it’s easy to think that with Wanda waking up it’s bound to be more interesting now that she’s gaining awareness, as she even goes on to mention in her sitcom confessional that she expanded the hex, which was interesting. Vision even got in on the confessional act, but went ‘off script’ and eventually stood up and left. The slightly chaotic feel that the show has taken on was only compounded by the fact that Monica Rambeau was adamant about reaching Wanda again, but the result wasn’t quite what she wanted since her passage through the hex has changed her yet again, perhaps even awakening the power that she’s been known for over the years. But even mentioning what’s been happening has angered Wanda immensely, as she wants nothing to do with Monica and doesn’t want to hear what she has to say. At this point, it feels as though anything that’s threatening her current stability has the ability to become the enemy, much as Pietro discovered in the previous episode when he mentioned how Vision couldn’t die again. That didn’t sit too well with Wanda, and we haven’t seen Pietro since. But that could also be Agatha’s doing.

Considering that we were given a look at everything that Agatha’s done to this point it’s very likely that Wanda might have not been in her right mind for much of this show, but was given the impression that she was. Agatha is a very powerful magic user and in the comics has been Wanda’s mentor in the magical arts. Maybe this is the show’s way of saying that she’ll be stepping up to take on that role as of now, meaning she could be the next step in Wanda’s story before the Doctor Strange sequel. We’ll have to wait and see what happens.