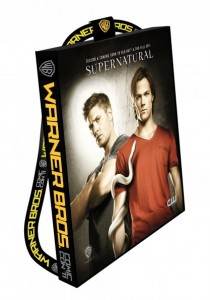 I don’t know if you’re familiar with the huge swag bags that Warner Bros. sponsors at Comic-Con. Last year they were actually rather cumbersome to carry around (especially if you’re less than 6 feet tall), so I’m happy to report that the studio has created bags this year that can convert into backpacks. You will appreciate this fact when you’re not dragging that bag behind you (the bag’s poster tube will remain intact).

Bags will be handed out to Comic-Con attendees when they pick up their badges. Below are the photos of all Warner Bros. bags available at this year’s Comic-Con.