There’s some very big news coming out of Warner Bros. for this year’s Comic-Con, taking place in San Diego from July 12 to 15. Earlier today the studio released the cover photos for its special Comic-Con TV Guide issues and now they’ve announced the debut of a free outdoor festival to be co-hosted with the Extra entertainment program.

The live multiday event “Warner Bros. Presents ‘Extra’ at Comic-Con” will take place at Bayfront Park, which hosts a 60,000 square foot stage close to the convention center and the nearby Hilton Bayfront Hotel. Talent has yet to be confirmed, but stars from such Warner Bros. shows as Fringe, The Big Bang Theory and The Vampire Diaries should be in attendance to participate in Q&As and interviews.

The free event will also all six of Batman’s Batmobiles from the TV series and films, the distribution of the special TV Guide issues, and a preview of the upcoming Lord of the Rings-based video game, “Guardians of Middle-earth”.

‘Everyone at Warner Bros. Television approaches Comic-Con as a fan-first experience. It’s in our DNA, with everything we do – from panels to signings to our bags, posters and more – carefully curated with our fans in mind,’said Lisa Gregorian, Chief Marketing Officer, Warner Bros. Television Group. ‘With the Extra at Comic-Con space, we have created a free and fun outdoor entertainment destination for fans. In addition to having all the Batmobiles on display and game demos, we will be hosting interviews throughout the day on the Extra stage, as well as evening and night events such as screenings and live comedy and musical performances after the convention floor closes for the day. It’s additive to the experience of being at the Con.’

A full live event schedule will be posted at the Extra stage and online at www.thewb.com/comiccon. 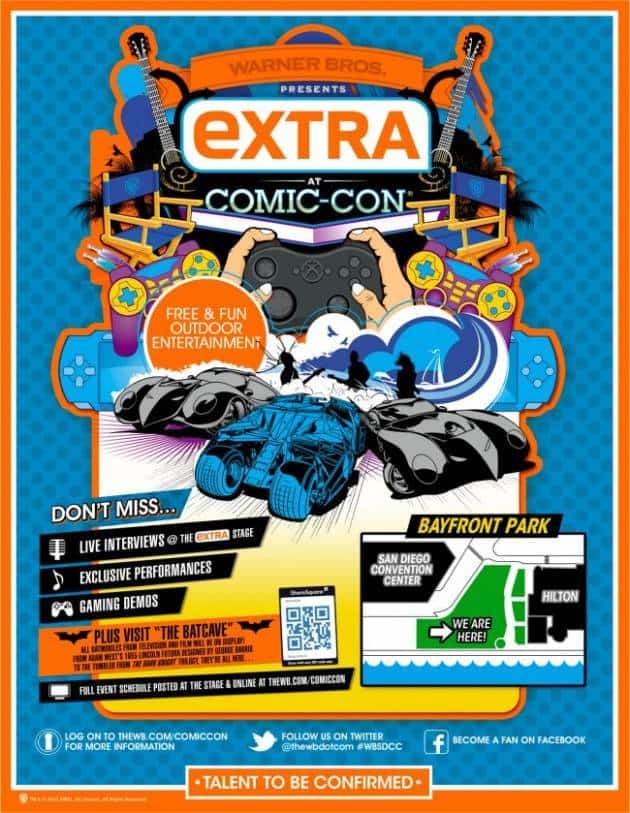