Home
Movies
Was Boba Fett’s “Solo” Cameo the Setup to a New Movie? 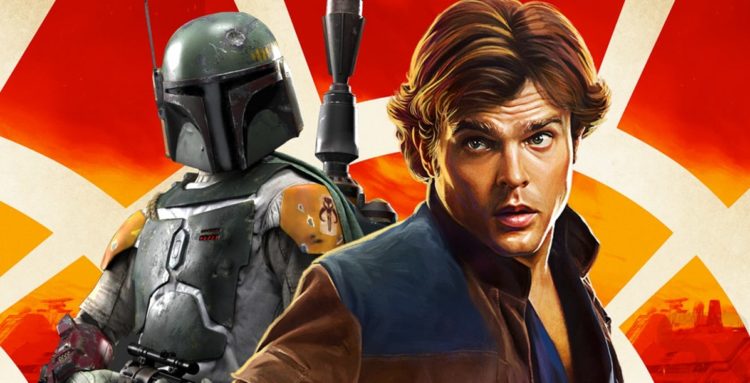 Science fiction fans are famous for scrutinizing science fiction media for hints about what they can expect in the future. In turn, this has convinced science fiction creators to insert hints in the form of cameos and other concealed but nonetheless uncoverable surprises. As a result, it is perhaps unsurprising to learn that there is what might have been a Boba Fett cameo in Solo.

In short, there is a character in the Lodge scene in which Han Solo meets Lando Calrissian. Said individual is wearing a helmet with a high-collar coat. However, what stands out the most about the character is that their helmet bears a T-shaped visor. It isn’t Boba Fett’s iconic helmet, but when one considers the fact that it is a green helmet with red accents as well as yellow kill-stripes, the resemblance is unmistakable. As a result, it is natural for interested individuals to assume that the character is supposed to be a much younger Boba Fett wearing an older version of his much more iconic helmet from the original Star Wars movies.

What Was the Cameo Supposed to Do?

Of course, if the character is indeed Boba Fett, that raises the question of why the people behind Solo made the choice to turn him into a cameo. The simplest and most straightforward answer is that they wanted to throw in something fun for the fans, which would make sense because it is very common for science fiction creators to do so. However, since there used to be plans for a Boba Fett movie, it is possible that the cameo was supposed to hint at something more.

In short, Solo reveals that it was Tobias Beckett who was responsible for killing Aurra Sing. For those who are unfamiliar with that name, Aurra Sing was a bounty singer who was active before, during, and for a little bit after the Clone War period in the Star Wars setting, with the result that she served as something of a mother figure for Boba Fett, who had been orphaned in the events of Episode II. As a result, this line of speculation says that since Tobias Beckett serves as something of a mentor to Han Solo, it is possible that what happened between the mentors could go on to ensure a hostile relationship between the mentees, which would eventually play out in the way that they did in the original Star Wars movies.

As for why Boba Fett would be showing up in something besides his iconic helmet from the original Star Wars movies, well, it seems safe to presume that he doesn’t have it at this point in time in the Star Wars setting. Certainly, he doesn’t have his father’s helmet, which he retrieved in Episode II but later used to set up a booby trap for Mace Windu. However, even if Boba Fett doesn’t have his iconic helmet, it would still make sense for him to go about helmeted. After all, he shares the same face as the clone soldiers, meaning that going about without wearing a helmet would be just begging for trouble from the authorities.

Now, it seems that Boba Fett’s cameo will remain as a cameo and nothing more than a cameo. This is because while there were once reports that a Boba Fett movie was moving forward, the latest stories suggest that the project has been if not cancelled, then stalled for an indefinite basis at the very least. Simply put, while Solo might have been doomed to failure at the box office for reasons that may or may not repeat for a hypothetical Boba Fett movie, its failure was nonetheless serious enough for Lucasfilm to reevaluate its movie plans to see if there is actually an appetite for a regular succession of Star Wars movies in the same way that there is for a regular succession of Marvel Cinematic Universe movies.

Instead, when it comes to Mandalorians, it seems that Lucasfilms will be focusing its near future efforts on the upcoming show called The Mandalorian. On the whole, this seems like it could be a positive step for the Star Wars franchise. In part, this is because the show promises to fill in some of the period between the original trilogy and the sequel trilogy. However, it also promises to introduce new characters for interested individuals to focus on instead of encouraging them to latch onto a small handful of longstanding favorites.