Home
TV News
Was Killing Off Carl Grimes A Good Or Bad Decision? 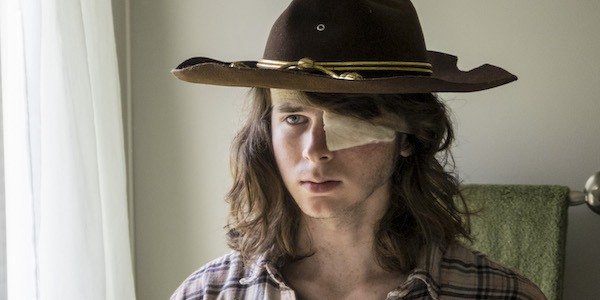 One of the most controversial decisions The Walking Dead show made was killing off Carl Grimes. I still remember when he revealed his bite mark. Very many thoughts were running through my head. Heck, I still have trouble processing it today. Why? Well, because I look back on the death of Carl and wonder if killing him off was the right decision or not. I’d like to really analyze the pros and cons of their decision to kill off Carl and in the end, we’ll decide if it really was ultimately a good decision. With the new trailer being released for the final season of The Walking Dead, I think now is as good as time as any to talk about past characters. And how can we not talk about the son of the (former) main protagonist, Rick Grimes?

To start this off, I must say, I feel like it’s impossible to talk about The Walking Dead and not talk about where it all began. Before it was a hit TV show, it was a successful comic book series. To be completely frank, I started watching the show before I started reading the comics. Actually, I didn’t even know it was based on a comic when I started watching the show. When Robert Kirkman wrote and released the first issue of The Walking Dead, it was way back in 2003. That’s about seven years before the showed aired on AMC. It’s rather surreal how far great things can go back, right?

Well, when the show began, Kirkman wasn’t even halfway done with the story in the comics. From Kirkman’s point of view, there was still much of the story to tell. What was interesting about it is that the show had some good guidelines to work off of, but it also wanted to tell its own story. If the story in the comics was good enough, then why mess with it? However, if we’re going to see the same story play out in a different fashion, then why make it the same exact story? As fans, we don’t want things to be drastically changed, but we also want to be surprised. The show has been doing that since the beginning and that’s why it’s be running all these years.

Well, we fans were beyond surprised when we watched the mid-season finale for season 8. When Carl revealed he was bitten, many fans were quick to go into the denial stage and make theories about how he wasn’t infected. The thing is, we all really knew the truth. Carl was going to die and The Walking Dead was never going to be the same. If I’m going to talk about this further, I have to mention a not-so little spoiler about Carl’s fate int he comics.

The way the comic series ended was nearly perfect. If you don’t want to hear any spoilers, click away. Carl died in the show, but in the comics, he lives to be a grown man with a wife (an adult Sophia) and a daughter they named Andrea.

But what happened to Rick, you ask? Well, for those who have been following the comic for a while, it ended how most of predicted. He didn’t get bit, but he was shot to death. He turned and when Carl found him, he was already a walker. Carl had to put him down and Rick was hailed by his friends and even his foes as a martyr. Heck, they even built him a frikin statue.

Since the early days of The Walking Dead show, the majority of the fans believed that’s how their story would end. Carl would have to put down a walker Rick, and then the last shot would be basically Old Man Carl. If you’ve never seen the fan art of him as a older guy with Rick’s hat and the exposed eye socket, look it up. It’s seriously awesome.

Well, we’ll obviously never see that become a reality when the show ends. The show actually reversed it. Carl was the one who got bit and Rick had to put him down. We don’t know where Rick is now, but we know he’s out there somewhere. He got to walk (fly, in this case) away in the sunset like we all thought Carl was going to. We don’t know how Rick’s story will end, but it won’t end with Carl.

So with all that in mind, was killing off Carl Grimes the right decision? I’ll admit, it was a ballsy move on Scott Gimple’s part and he gave a good case for it. However, Carl was basically replaced with the far less interesting Henry. When we got to season 9, Henry was the substitute for Carl’s story during the Whisperer War arc. He had trouble with other kids in the community, gave Carol and Ezekiel trouble, and started a relationship with Lydia. And just when he started getting interesting, Alpha took his head off and placed it on a spike. Typical Walking Dead treatment for the side characters.

So after they killed off Henry so soon, I just wondered what was the point of killing Carl? If Henry was going to take over for his story, then why would they kill him off a season after killing Carl? To me, it seemed rather anticlimactic and a bit pointless. It did give Carol and Ezekiel more development, but Carl’s story is a special one. When Negan told Rick that Carl was supposed to be the future, we fans understood. Now that he’s gone, whatever slim chances that story could’ve been told died with Henry. It seems like the legacy of Carl lies solely with Rick.

So if Carl and Henry died, that means Judith could be the one to continue that legacy. She’s becoming a intriguing character and her survival actually continues the legacy of several characters. As far as she knows, she’s the daughter of Rick and Michonne. However, her true parents are Shane and Lori. Will she ever discover that? If she does, she probably won’t learn the truth from Michonne. Michonne never even met them, but for Rick, Shane was his best friend growing up and Lori was his wife. I think Rick will reunite with his adoptive daughter again and he will tell her the truth about her real parents.

Since the story of Carl from the comics can no longer be told in the show, the show has a chance to tell another version of that story with Judith. It may not reflect Carl’s story completely, but it can be translated in another fashion with Judith. She can be the one to put down Rick or maybe Rick doesn’t even have to die.

That’s probably the biggest benefit we can take away from the show killing off Carl. Now that he’s gone, we really don’t know how the show is going to end. The comic ended how we expected it to, and that was Carl’s end. Now that Carl is dead, the show can end in a way we won’t predict. It can end with Rick having a happy ending or it can end with Judith shooting him after he’s turned. After Carl’s death, I think we should keep reminding ourselves that the show fully intends to end much differently than the comics.

That’s a good thing. As much as I loved that ending from the comics, we don’t want to see the same story told over again. The show clearly knows how to surprise us, so they need to stick with that and make the finale unpredictable. If they can do that, they can give us one of the greatest show endings ever.

So what are your thoughts, Walking Dead fans? Do you think it was a mistake or a good thing to kill off Carl Grimes? I guess we’ll truly know the answer when this final season ends.