Home
Movies
Was There a Good Movie Buried Somewhere in Sony’s ‘Venom?’ 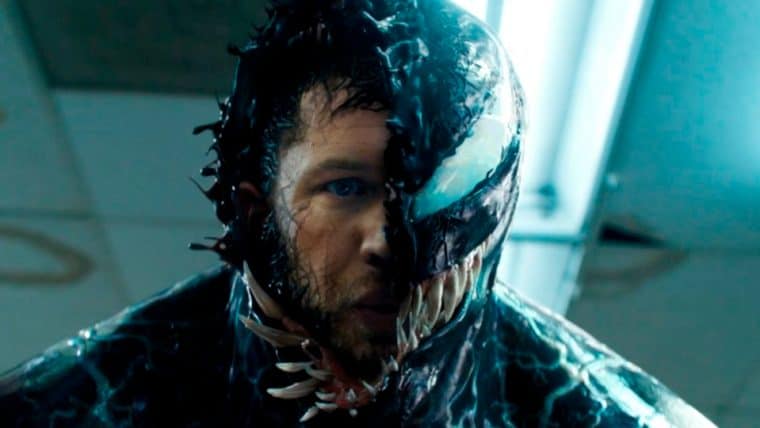 For as unwaveringly harsh as I have been on the Venom (2018) front – and for as ardently as I will go to bat for every last word I wrote about it – it really never had to be this way.  Yes, a Venom movie that couldn’t use (let alone mention) Spider-Man was always going to be a head-scratcher.  Yes, despite a character design that can’t help but be iconic, Venom could never seem to stand out against his nemesis’ other, more colorful, more interesting rogues.  And yes, Sony’s been struggling to make a good movie, let alone a good Spider-Man movie, for more than a decade now with little to show for their efforts.

But this still never had to be like this.  Surely, there had to be a good (or at least passable) movie to be made out of this particular character, warts and all.  Right?

Well, probably.  The pieces were all there for a decent enough, if now outright good, movie (even if the core defining aspects of his backstory, i.e. Spider-Man, were necessarily missing from Sony’s toolkit). 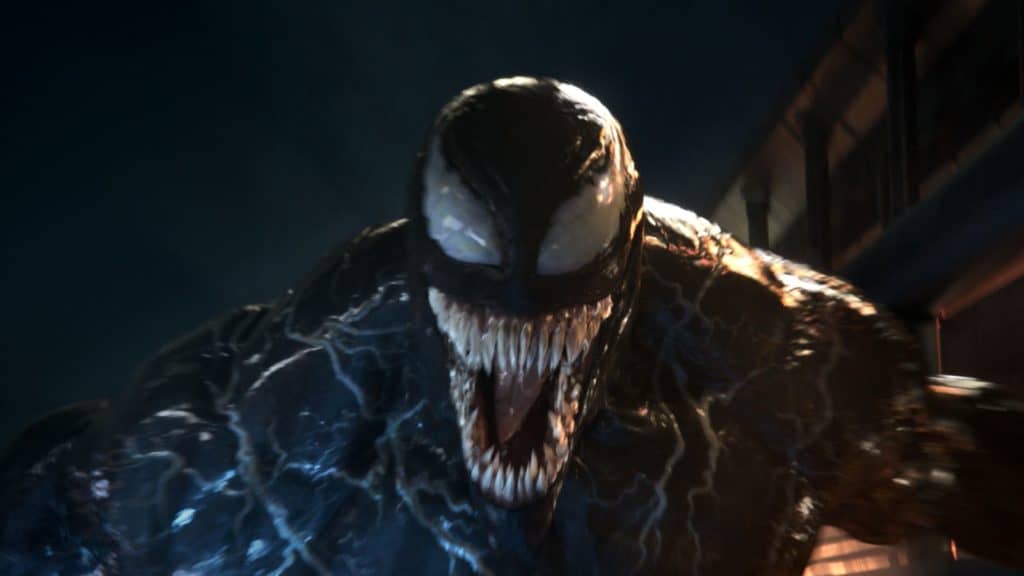 Take Ruben Fleischer for instance: Venom’s ill-fairing director.  On the surface, he was a perfect choice for this material.  The character of Venom is perhaps best suited as an off-kilter, almost-horror story: a tale of jilted ersatz lovers on the vengeful path toward accepting their one-sided breakup.  And due to the inherently alien nature of the character, the bombast of late eighties and early nineties comic books, he’s often an over-the-top and downright funny character (or, at any rate, nobody wasn’t laughing at that “turd in the wind” line when it came up in the trailers).

Fleischer’s defining movie before this was Zombieland (2009), which is basically the blueprint for the kind of movie that Venom wanted to be: an r-rated horror-comedy with a cast of flippant, fourth wall-breaking characters and a the kind of sweeping directorial flourishes that get you noticed (by audiences and studio heads alike).  He took a nothing movie, based on an original idea, and raked in three times what it cost to produce for the studio who fronted the cash for it.  And that studio was, you guessed it, none other than Sony. 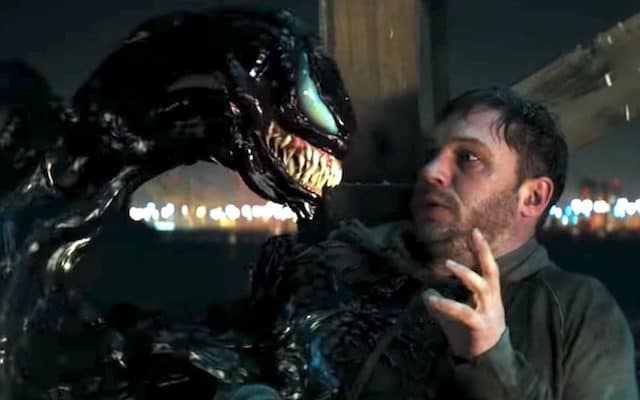 On paper, Venom really does look a lot like Zombieland.  It was pitched as a hard-r horror-adjacent blockbuster that tapped into a similarly dominant subgenre at the time of its release (in this case superheroes, rather than zombies).  Both featured a cast of pretty major talent fronting the proceedings (in both cases, probably a lot better than the movie itself actually deserved).  Both were even released in October.

Looping back on one of those last points about the movie, Venom is insanely well cast.  Although my personal choice would have been Jake Gyllenhaal basically reprising his sociopathic videographer from Nightcrawler (2014) in order to lean harder into his generic roots, there is no denying that everybody’s favorite action-Brit Tom Hardy perfectly embodies the knuckle-dragging, macho-headed beat reporter that typifies the comic book version of Eddie Brock.  He’s an incredible actor with range enough to play this kind of dual role as victim and villain entwined in an implicit (not to mention dysfunctional) romance.  I’ve seen the man carry an entire movie with nothing more than voice-over telephone calls and his rearview reflection to act off of, and he turned in one of the best performances of 2014 as a result.  Surely this lowballed tentpole role would be a synch for the man. 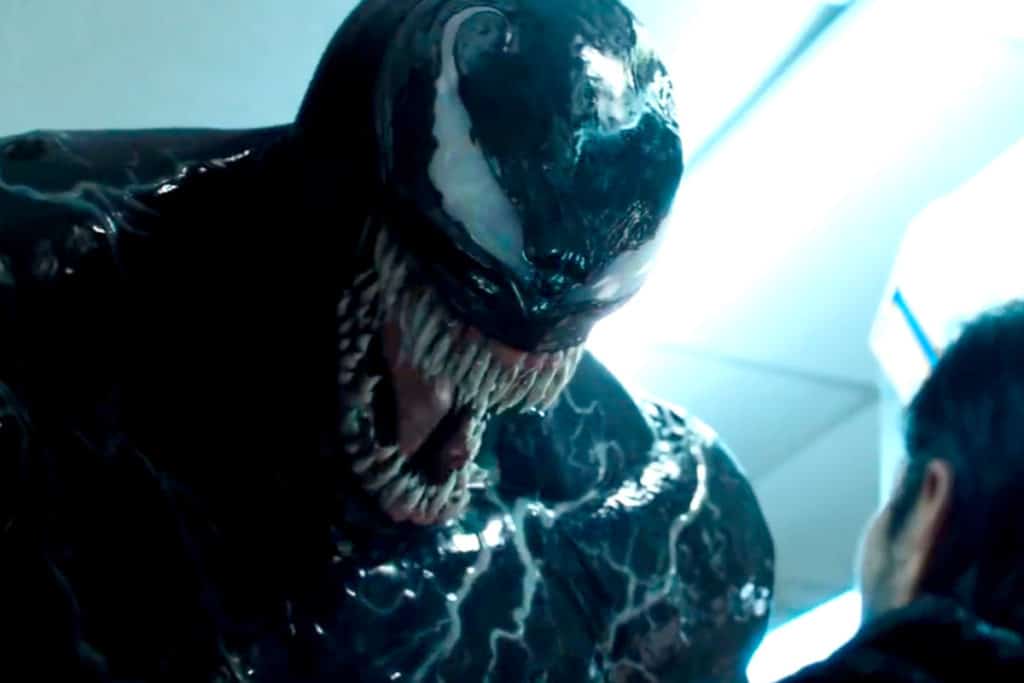 As it turned out, however, it wasn’t.  For reasons I cannot even begin to fathom, Tom Hardy’s sweaty, disheveled, gross-feeling performance channeled his inner Adam Sandler for inspiration, ultimately delivering a performance that was less Jekyll and Hyde and more Water Boy (1998) or Billy Madison (1995).  He adopts an obnoxious raspberry inflection to his voice, shrivels up like a strongly-rebuked possum and does… well… whatever the Hell he does in this movie.  And seeing how he and his better half comprise the lion’s share of this movie, there’s very little that the supporting cast can do to elevate the central dynamic between Brock and his hanger-on symbiote.

The thing is, though, that even after accounting for the alleged forty minutes that Sony hollowed out from the movie when they decided to downgrade its R rating to PG-13 – leaving behind all of Tom Hardy’s favorite scenes, seemingly important plot details, thematically and tonally relevant scenes of terror and violence and necessitating reshoots and cheap, quickly-rendered eleventh-hour special effects – the actual script that Fleischer & Co. shot with was incredibly solid, and either restoring that lost footage or giving it a final once-over in the editing room would have resulted in a perfectly serviceable storyline.  In that way it’s actually a lot like Michael Bay’s Transformers (2007): surprisingly decent on paper, but utterly ruined in execution.

When all is said and done, the script actually gets Venom as a character.  It understands that his character motivations are inherently (if twistedly) romantic in nature.  Even if he doesn’t have Spider-Man as a jumping-off point so as to become a jilted lover, he still has Eddie Brock as his dysfunctional partner.  They’re bad for each other, but desperately need what their better half brings to the table in order to achieve their mutually-beneficial goals.

Unfortunately, though present, this all-important aspect of the character rarely rises above subtext within the film itself.  We see the hint at a romantic-esque (romantic-adjacent?) bond form between them, but little grounded in the overt.  They both takes sides with Brock’s ex-fiancée and the unquestionable high point of the movie is when the Venom-infected ex makes out with the damsel-in-distress Brock, only for the symbiote to re-infect Brock during their passionate necking. 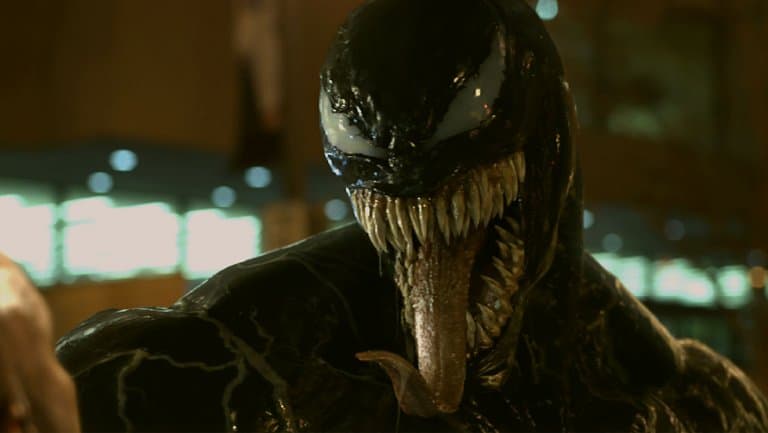 So, yes, even with the restrictions being placed on the production, there was a good movie at the core of Venom.  Sony hired on the right talent for the job.  They (initially) gave it the proper rating and allegedly even filmed the right scenes.  The script, while imperfect, was got to the root of the Venom character and his core relationship in Eddie Brock.  Unfortunately, Sony really Sony-ed the production up: rushing the script out without the requisite number of passes in the writing room to actually make it good, cored out the movie’s plot to accommodate a ill-fitting rating and filled in the necessary details after-the-fact.