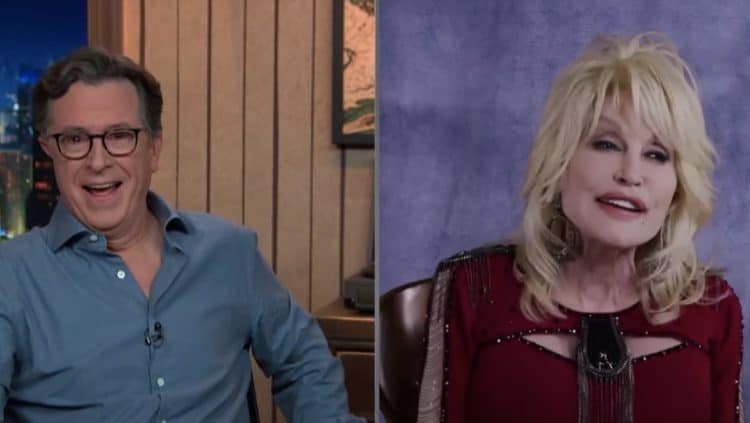 As touching as this is supposed to be and really is to a lot of people no doubt, it’s hard to avoid noticing that Dolly Parton’s plastic surgery has affected the way she talks and the way she looks. Instead of aging gracefully, Parton has instead opted to touch herself up over the years until she looks a bit different than she did when she started out and was a natural beauty. But after all the work that she’s had done, including augmentation on a chest that helped to make her famous at least in part since her body is a big part of what people comment on, she’s still one of the most famous singers in the world and someone that many people have glorified over the years. The fact that her singing actually makes Stephen Colbert cry during this clip is enough to think that she has some quality that reaches people on a level that they can’t help but feel deeply and are moved by in a way that brings out a great deal of emotion. Maybe I’m just a cynic or maybe there was too much Dolly in my musical diet when I was a kid, but somehow it’s easy to say that Dolly doesn’t do this for everyone since she still has a very nice voice, but the inherent goodness in this woman just doesn’t touch everyone.

Some might state that only the most empathetic would be able to really weep at a song that’s sung in an impromptu manner like this, while others would state that some subjects just hit people in a different way, but the truth of it is that the second explanation is likely the best since empathy can be felt by just about anyone, but there are plenty of people that can separate empathy and emotion without any difficulty. Cognitive empathy, as it’s known, allows a person to understand and comprehend the feelings of another, or understand the situation that a person is in, without getting emotional about it, while emotional empathy obviously involves people becoming emotional about something, or someone. Perhaps Colbert is an emotional empathizer or maybe he’s simply someone that is far more sensitive than many. It’s hard to tell, but the fact that he’s crying on air after hearing Dolly sing just a bit indicates that the song meant something to him, he’s touched by her singing, or there’s something else going on there that we can’t really see or discern. It might feel like a very clinical and unfeeling way to say it, but there are plenty of people that might look at this and state that they really don’t know why Colbert is crying, other than the fact that something about Dolly’s song struck an emotional nerve that he couldn’t or didn’t want to suppress.

Many people feel the world around them in a much different way. Some would state that they feel everything and can’t help the emotions that come to them at times, while others might stand back as observers and bear witness to the world rather than join it on an emotional level. People from both aspects would no doubt call each other out for being too cold, too sappy, too analytical, or even too weak to keep the emotions at bay. None of them would be wrong to be certain since the way a person feels their way through life tends to say a lot about them. But the trick with feeling is that it pays to live in both worlds from time to time in order to be able to stand back and observe now and again and yet still be able to feel what others are feeling without having to analyze it from afar. There are people that are able to do this quite well, and it’s often a very difficult stance to maintain. But it would appear that Colbert is someone that allows his feelings to rest in the open where people can see them, and being who he is it’s kind of obvious that he learned how to deal with this some time ago and has no trouble letting people see his reactions to certain stimuli that hit him in the feels.

To be certain, there’s nothing wrong with expressing emotions in front of people when one feels the need since it’s a healthy way to live and it allows said feelings to roam instead of being pent up where they can do more damage to the individual over a period of time. The fact that it was Dolly’s singing that pulled it out of him isn’t a big deal since it could have been anything that he feels strongly about it feels or something that he finds inherently pleasing. Some people are comfortable with showing their emotions to the world, and there’s nothing wrong with it.