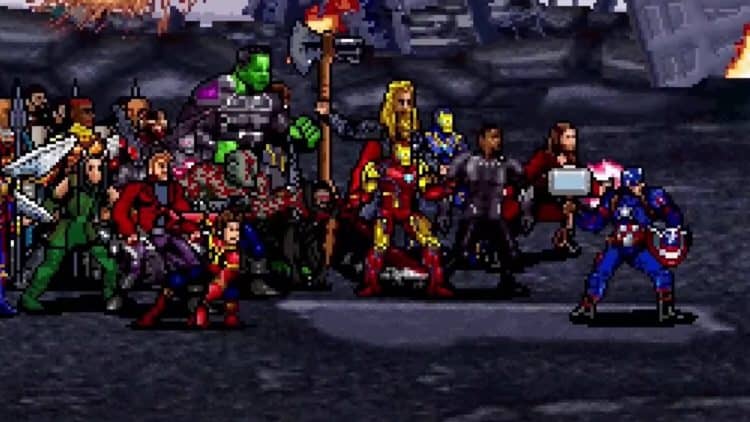 You’ve got to be a little impressed with the way this came out in 16-bit if only to give credit to where it’s due and also admit that yes, it’s still kind of emotional since the passing of a beloved superhero, despite being fictional, creates an impact that people feel. The best thing the MCU has done, and sometimes the worst, is to make the feeling that it delivers very personal, since like a lot of people can recall, the hard truth of Infinity War was that the Avengers did lose to Thanos, and they lost in a way that was demoralizing on a level that was felt by just about every hardcore fan around the globe. Heroes like the Avengers aren’t supposed to lose, after all, they’re supposed to take the worst in stride and plow right through it, perhaps getting beaten up and abused along the way, but still more or less making it to the end without too many losses. But Infinity War upped the game quite a bit, and Endgame made it clear that losses were going to happen, but the loss that ended up being the most painful was the one that people weren’t fully expecting. Admit it, losing Iron Man was bound to happen and everyone realized this, but a lot of people probably thought that he would finally retire the role and do something else like perhaps be an advisor or consultant to the Avengers. But at the very least, Tony’s death came to mean something since he went out as a real hero, by defeating the bad guy and ensuring that he wouldn’t be coming back any time soon.

It should be easy for people to admit though, if this game had been made when 16-bit was still the rage and new to the gaming world, people might have been a little confused as to what was going on, but they would have flocked to get it and it would have been one of the most talked-about games on the market, and likely one of the most expensive. But if it had been released back in the day people might ask why Thor was big and chunky and why the Hulk was wearing more than his standard clothing. Of course, back then the Hulk had taken to wearing more than the regular purple pants that appeared to go with him everywhere he went. People likely have commented on a lot of things, not least of why Scarlet Witch wasn’t in her costume, and Spider-Man looked different, and so on and so forth. The obvious truth is that the Avengers have changed quite a bit since the MCU came in and started telling the story, but in a lot of cases, it’s been for the better since the story has become a lot more entertaining in some ways. There are downsides as well though, since the criticisms against the MCU and its heroes, of which I’ve personally added to in the past, have yet to stop since a lot of us remember our favorite comic book heroes from back in the day and have had to adjust to seeing them as they are now.

This is especially true when it comes to realizing that Disney has altered things in their own way and in doing so imposed a limit to the power that a few characters should rightfully possess. The Hulk is an obvious hero that feels as though he’s been limited, while heroes like Captain America and Captain Marvel feel as though they’ve been given a serious boost that wasn’t present in the comics. Thor is another character that feels as though he’s been abused in this same manner, as his power levels in the comics were on par with several galactic entities and despite still being challenged by Thanos, he should have been one of the strongest and most intimidating heroes in the entire MCU. But that’s neither here nor there at the moment, and Endgame was a movie that brought a definite and likely lasting shift to the MCU since moving forward things are going to be quite different. No Iron Man, no Captain America, Thor might there for another movie, possibly two if Hemsworth can be convinced, and even the Guardians of the Galaxy are going to be gone after the next movie. Granted, this is going to take a couple of years to happen, but all the same, the landscape of the MCU is going to change in a big way, and it’s a hope that it will continue to move in an upward fashion so that it can belong to future generations just as it belongs to those that have enjoyed it thus far. In the meantime, we can always look back and remember how great the movies were starting out and wonder at what’s coming next.