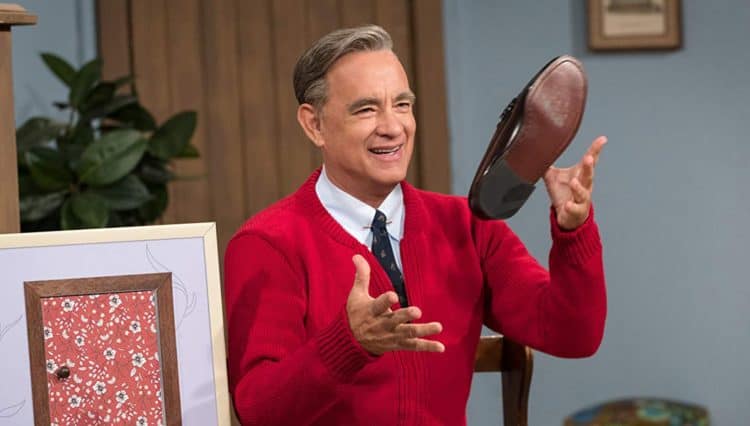 How could you not recognize Tom Hanks? The main gist of this video of an interview on The Jimmy Kimmel show (below) is that on an episode of Jeopardy! that ran recently,Â  one of the questions had to do with Tom Hanks in the role of Mr. Rogers….and not one of the contestants managed to answer it correctly (as Erin Nyren of Variety noted). For those in the audience it had to be difficult to think that the three grown individuals at the podiums couldn’t answer. For those watching at home it would seem even more frustrating since Mr. Rogers and Tom Hanks have both been so well-known throughout America and possibly the world for so long that not being able to pick them out of a crowd or even from a movie clip is simply insane. Granted, some people might have grown up never knowing who Tom Hanks is, if they didn’t have a TV, never watched movies, and were living under a rock for most of their lives. But this is Jeopardy!, the show where you absolutely need to know as much as possible before stepping onto the stage. It’s the kind of show where you need to be a walking, talking version of Google to have any chance of reaching the end with a winning score.

Not knowing who Tom Hanks is something of a quandary since he’s been so ingrained in American culture for so long that it’s almost impossible to think of a time in recent history when he hasn’t been involved in something monumental. From his movie appearances to his activism to his philanthropy to just…all of it. He’s the kind of guy that gets involved with life on a very intimate basis and to think that people haven’t heard of him and can’t recognize him is kind of hard to believe. That he played the part of Mr. Rogers and people though that he nailed it is all well and good, but still, he and Mr. Rogers don’t look enough alike for a person to think that he’s indistinguishable from the renowned TV star, no matter that he played the part beautifully and has, like always, brought his A game to the table for all to see. It’s still Tom Hanks, he’s still a very recognizable individual, and it’s simply difficult to think that anyone would confuse him with anyone else.

The best part is that it doesn’t sound too much like ego when Hanks is blown away by the fact that people on the show didn’t recognize him. If anything it’s the same thing he probably got while on the set of the Mr. Rogers movie since it sound as though people were seriously impressed with how he channeled Mr. Rogers by wearing the same kind of clothing and performing in the same way as the icon did for so many years. Mr. Rogers was someone that a lot of us grew up watching and either turned away from when we were old enough or continued to follow simply out of habit and possibly when we had our own kids since his lessons were considered to be so great and his ability to influence others with the old-fashioned and still important values that he preached were far and away one of the best parts about his show.

This individual was someone that might not be seen again in any form since quite honestly show business has changed quite a bit in the years since his passing and as a result it’s become a much different animal that’s run more on the basis of being able to chase the almighty dollar than the betterment and education of the generations that are swiftly coming of age and want to assume their place when it’s time. The lessons of Mr. Rogers are needed now more than ever since while we weren’t perfect in our day, we were at least taught how to respect others, which is a lesson that is really needed as of now.