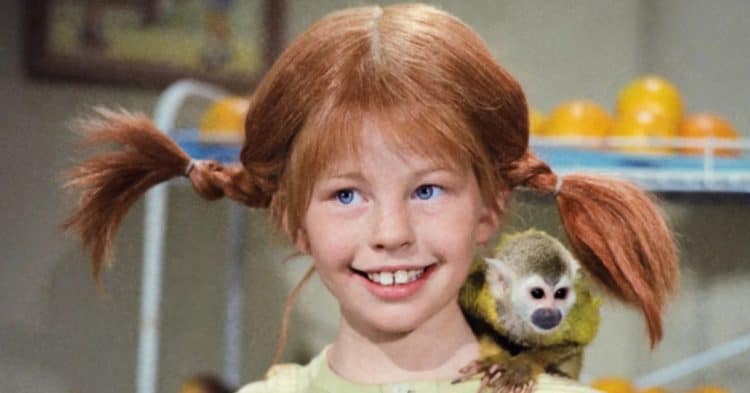 It takes Mike Jones from ScreenRant to get to the main subject but in truth it’s kind of hard to wonder why a reboot of Pippi Longstocking hasn’t emerged as of yet since reboots seem to be the thing right now. But considering the success that the producers of Paddington have been seeing, as they’ll be the ones bringing this reboot to life it sounds like, it’s not hard to see why it might have been on the back burner for a while. Pippi Longstocking is one of those characters that a lot of us know about at least in name but have largely forgotten about unless we were big fans and have kids that happen to know about the character.

There’s a reason why Pippi was so attractive to a lot of kids when it came to her character, as she was the essential kid without rules as she didn’t have a mother or father that she lived with. Her mother passed away when she was born, and her father was at first lost at sea and then became the ruler of an island far away. In other words, Pippi, with her suitcase full of gold coins, was living the life a lot of kids back then would have done just about anything to have, save for the part about having to take care of themselves entirely. When you look at this character through the eyes of an adult that’s already been through childhood and knows that it takes a great deal of effort to grow up with or without parents, her tale becomes kind of a sad one that you can’t help but wonder about. How in the world could a young girl take care of herself without any parents? But then you come to realize that Pippi wasn’t exactly well-behaved unless she wanted to be and didn’t really have the kind of etiquette that a lot of kids are taught throughout the years since she didn’t have someone trying to impose any rules on her. When people in her stories try they tend to fail since she’s not about to be told what to do.

Just looking at the story of Pippi Longstocking from the outside you might not think she’s a good role model for children, and she’s not in a couple of ways, but she’s also a very imaginative storyteller and is able to spin a yarn unlike anyone since she has an imagination that can’t be tamed. In a big way Pippi is the freedom of children, the longing spirit that keeps people young when they’re still able to wonder and enjoy the simpler things in life that don’t always make sense and don’t need to. Once we grow up we tend to forget just what that was like, to go through our day and wonder about everything that we didn’t know and think the most grandiose thoughts imaginable for the simplest things we come to realize when we’re adults. This is the kind of movie that could very well become another kid sensation in this era and it might be one of the best ideas to come around. There aren’t any real details to go with the pronouncement as of yet but you can bet that they’ll be reported on once the movie starts rolling. It’s not even certain just who might get cast into the various roles that might come along. What is certain is that Pippi is a worldwide phenomenon that has been translated into dozens of languages and has been widely enjoyed by a lot of kids that likely see her as one of the most iconic names in children’s literature. She’s had a couple of chances at being a TV show in the past in the 60s and the 80s, and for a while people were willing to respond in a positive manner. But like a lot of things from back in the day Pippi was eventually relegated to fond memories and kept within the books.

Bringing this back would be a nice trip down memory lane since a lot of us at least heard about Pippi Longstocking even if we didn’t grow up with her stories around. She was one of the first real rebels among the younger kids and someone that was easy to look up to since she lived that kind of life that we all dreamed about but somehow knew we couldn’t have. It’s true that she still wouldn’t be the best role model in the world to kids but at the same time she’d still be a fun and engaging character to bring back since if you look at kids’ cartoons and shows today there are a lot of characters that don’t like to conform to what adults want. In fact, Pippi might fight right in.