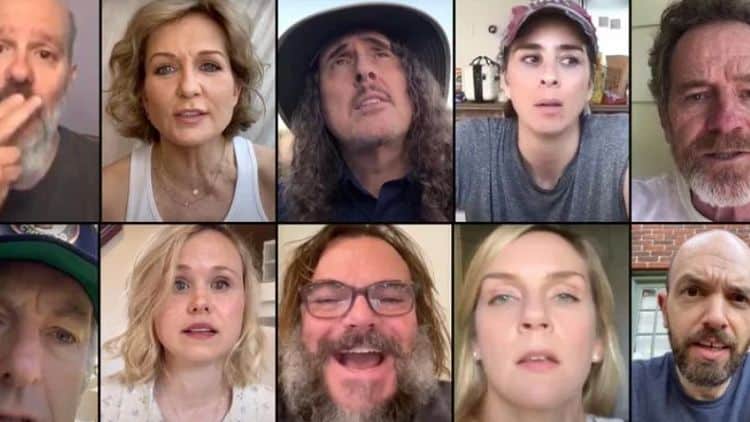 Hands up, who’s tired of hearing ‘we’re all in this together’ from folks that are weathering the pandemic with a flush bank account and a home that could house two or more families? It’s easy to give celebrities some credit since a lot of them are in fact donating to charities and trying to ease the burden of these hard times as much as they can, and they are trying to be funny and amusing at the same time with their PSA’s and parodies that they come up with from time to time. Apart from whatever charities he might partake in Weird Al Yankovic is absolutely known for his ability to take a song and make something funny out of it. But how many people are ready to tell actors that the constant cliches are becoming a little worn out? Eric Liu of The Atlantic had something else to say on this matter.Â  It is a cynical thought to have and it might sound a bit disingenuous, but at the same time it’s born from the irritation that people want entertainers to be entertaining, not preachy. Thankfully this video, up until the end, is just that, fairly entertaining, but it also showcases that actors are getting downright bored as well, which is where the ‘all in this together’ diatribe makes the most sense. While a lot of people are in agreement that celebrities aren’t really hurting when it comes to money, it is agreed that a lot of them would love to get back to work finally.

Out of everyone that’s been hurt by the pandemic and the need to practice social distancing, the entertainment industry has been one of the hardest hit since it’s hard to make a movie while standing six feet away from someone at all times. Brent Lang and Gene Maddaus of Variety have more on this topic. That would make any and all fight scenes appear even more fake than a WWE match to be fair and might work for movies like Castaway and Moon, or even the Life of Pi, but at one point or another human interaction is needed and it’s desired to see it up close and personal, not held out beyond arm’s length. The shutdown at this point is still on however and without an end in sight it’s hard to say just when studios will reopen and when new material will be produced. It’s a hope of course that it will be soon and that even theaters will start opening up, albeit with the type of entry procedures that one might see in a production factory. Seriously, the idea is to walk through a clean room environment and then have your temperature taken. If a person looks or acts sick and/or has a temperature of 100 degress F or more then they’re not going to be admitted. If that’s what might happen at a movie theater one has to wonder just what precautions will be taken on a movie set, considering that people have to be able to touch each other at some point in the feature depending on the movie.

Things are definitely going to change from here on out, and in fact you could say that they have changed already given the social climate of the US and how people are trying to cope during the pandemic. As you can see with these constant videos, actors are doing what they can just to keep themselves busy, though it’s likely that a lot of them have plenty of stuff they can do to fill their days, perhaps even unfinished projects or things they’ve been wanting to do for a while and just never had time for. Much like the rest of us they’re doing what they can to just push through, but the need to have the attention of the people is going to be a constant without a doubt so it’s likely that until the pandemic is over that we’ll keep seeing videos like this. It’s one thing to amuse and entertain people, but it’s another thing to think that a lot of them are being glory hounds that just want their face where people can see them. Realistically, people aren’t going to forget them, but it’s also enough for a lot of people who simply like watching their favorite stars do whatever might pop into their head at the moment. Shirley Li of Variety has another perspective on this matter. So a person might enjoy these videos or they might not, it’s all a matter of how they view the celebrities that are going through the same pandemic but in a much different, and in some cases more secure way. Being told that ‘we’re all in this together’ is a statement that strikes a lot of people in different ways since a lot of folks will look at it from one angle or another. It is true that many actors have no idea just what a lot of people are going through right now, but it’s also true that a good number of actors are trying to help in whatever way they can.