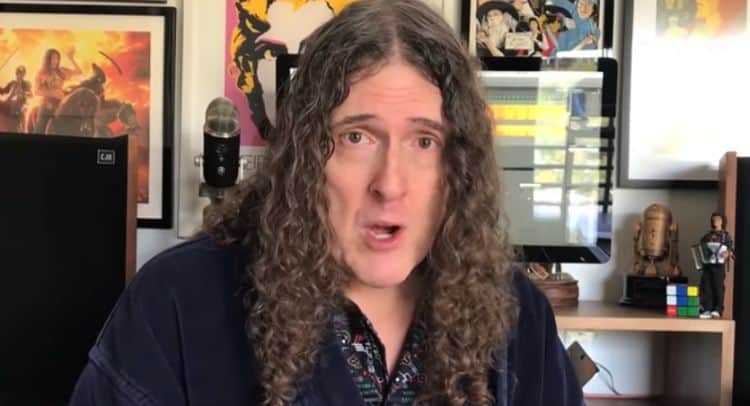 Well, one thing you can say about some celebrities, when they’re not giving to charities and otherwise trying to entertain people, they’re keeping their edge in certain moments, as Weird Al Yankovic is doing, has been doing, has done for so long. Jimmy Fallon, stuck in much the same boat as any other talk show host, is currently doing what he can to stay on top of the business from home, and like so many others has been keeping in touch with other celebrities as they try to stay in the spotlight and continue to deliver entertainment that’s not quite the same caliber as we remember from only a short while ago, but is at the very least funny enough and engaging enough for some people as they continue their everyday grind and either get back to work as an essential employee or remain home and try to think up new ways to keep themselves occupied. As usual Al is performing one of his many spoof songs that have been so hilariously funny over the years and have allowed many upon many fans the chance to laugh uproariously at the lyrics he comes up with in regards to favorite songs that take on new meanings quite often when he brings them out. One More Minute is a perfect, if somewhat psychotic way, to advocate social distancing since he goes on to describe a number of things he’d rather do than spend another minute with a woman that basically stomped on his heart. The imagery he gives in the song is nothing short of insane, funny, and definitely designed to show a sense of loathing for another person that goes beyond the norm when it comes to breaking up with someone. But that’s how Al rolls, and it’s been his gimmick for so long that expecting anything else would be kind of odd.

His song parodies were something that a lot of us were listening to when we were still growing up since he’s been active since the late 70s. Songs such as Eat It, My Bologna, and White and Nerdy, along with Amish Paradise (a personal favorite) have escalated him to the kind of stardom that people don’t always talk about but are definitely aware of the moment they hear a song that they like. He hasn’t stopped throughout the years as he’s still at it and still one of the best in the business considering he’s really one of the only singers that still takes up the act of parodying one song after another. A lot of artists have actually found his attempts pretty hilarious, showing that they have a good sense of humor and realize that Al isn’t mocking them but is performing his own style using an example that they’ve already laid down. In a big way it’s kind of an honor for Al to take on one song after another since it means that the song was worth taking a second look at to see if anything else could be done with it. Some folks might not like the parodies and feel that they’re unfairly critical, but that’s usually when you can figure that said people don’t really have a great sense of humor and take things way too personally.

Weird Al Yankovic is all about being funny and taking on songs that are entertaining in an effort to remake them into something that people can still enjoy and laugh over at the same time. The fact that he took time out of his day to sing this one particular song for Jimmy Fallon’s home show is pretty nice, but it’s also indicative of just how much free time the celebrities have and how much they likely want to get back to work and be center of attention again. Granted, a lot of them are taking part in the relief efforts for the pandemic and are contributing to the overall well-being of others in a big way, be it just offering a smile, encouragement, entertainment, or even huge monetary donations to different charities that are being set up to help people throughout the country. The fact that the celebrities aren’t all squirreled away in their mansions or other opulent homes is great since it means that a number of them do care about the common folk, their fans in other words, and are willing to help put a smile on another person’s face in one way or another. One thing Al has always been good for is a laugh since he’s been dishing out the comedy for decades now and shows no real sign of stopping just yet. Hopefully one of these days there will be a successor to his brand of comedy, but there won’t ever be another guy like Weird Al, that much is certain.