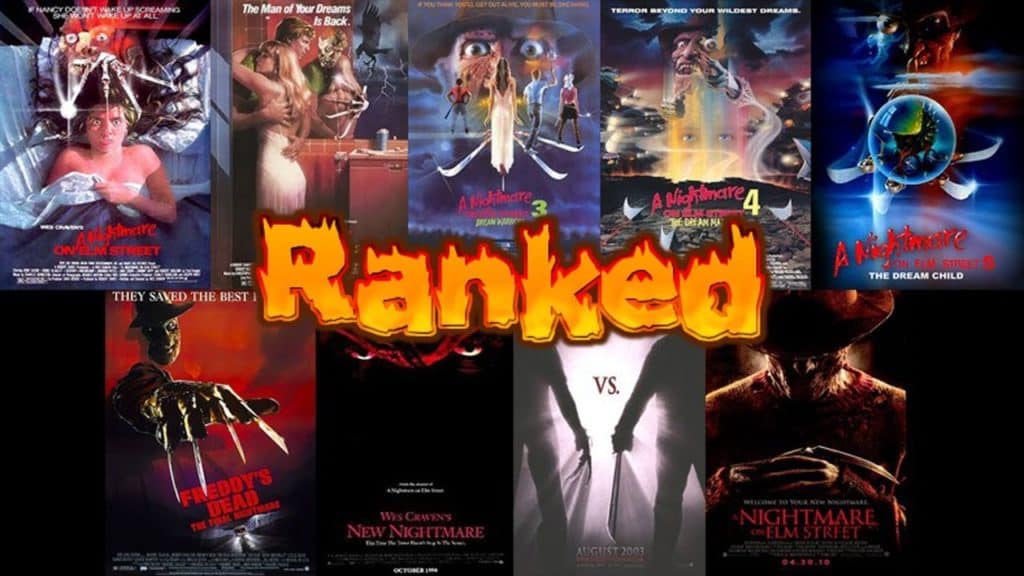 When it comes to the “major” horror properties out there, there’s a few big names that seem to take up all the oxygen in the room.  Starting in the late 1970s and thorough the late 1980s – when Hollywood studios were finally starting to come back after the disastrous collapse of the Studio System in 1969 – you have names like Leatherface, Michael Meyers, Jason Vorhees and Charles “Chucky” Lee Ray that have handily stood the test of time and continue to scare moviegoers well into the present day (in whatever form du jour they have taken in the intervening years).

One of the most improbably success stories from that period, however, is Freddy Krueger.  One of the desperately few American ghost stories that have actually managed to find purchase in the popular culture – in part, I imagine, because his movies are definitively slashers and only use his spectral backstory to justify his increasingly fantastic kills – Freddy Krueger really started off sub-cycle of supernatural slashers stating in the mid-1980s (followed shortly thereafter by the Child’s Play, Leprechaun and later Friday the 13th movies).  But with more than 35 years and 9 movies under his belt, it’s sometimes hard to navigate the crooked landscape of this franchise, especially when it comes to late autumn when horror movies find themselves at a premium.  Never fear, though, because the following list will help you sort the wheat from the chaff when it comes to the original crack-up killer of the 1980s. 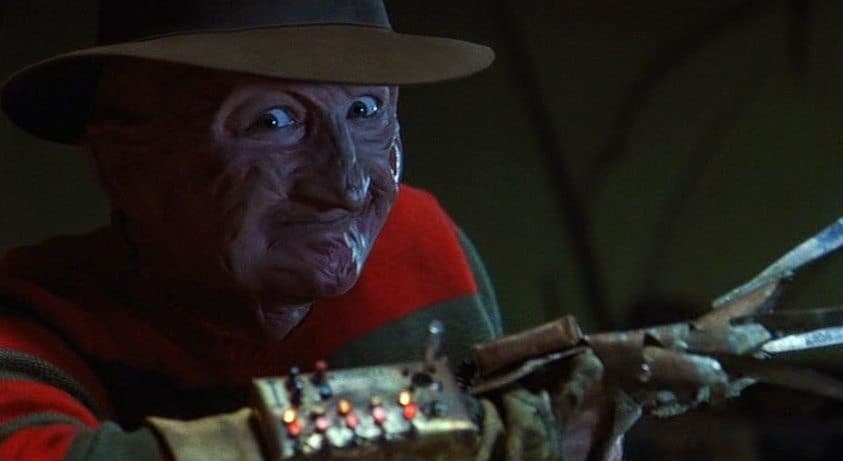 9) Freddy’s Dead: The Final Nightmare (1991) – As with life, the universe and everything, entropy is the only constant.  So too is it with slasher movies.  With very few exceptions, the Nightmare on Elm Street movies got worse year after year, where Freddy became more and more clownish, the central gimmick became more and more played out and the kills began to blend together.  Fittingly, then, the so-called “Final Nightmare” stood wholly above the rest in terms of its confused tone, unmemorable kills and attempt at fleshing out Kruger’s backstory that simply played out like a desperately worse version of Dream Warriors five years beforehand.  Although I do have to say that I’ve always love Krueger’s logic for why he should expand beyond Springwood’s modest borders: “every town has an Elm Street!”

8) A Nightmare on Elm Street: The Dream Child (1989) – While not exactly the worse in the franchise, it really isn’t all that far off.  Between this and its immediate predecessor, The Dream Master, this is the point where these movies lost their sense of individuality and all started to blend together into one big semi-horrific mélange.  While none of the kills were ever as bad as The Final Nightmare’s Power Glove product placement, here, too, they’re not really all that far off: a few interesting ideas, but mostly flat executions (pardon the pun) that can’t help but make you think of all the better death scenes that the franchise offered up in years past. 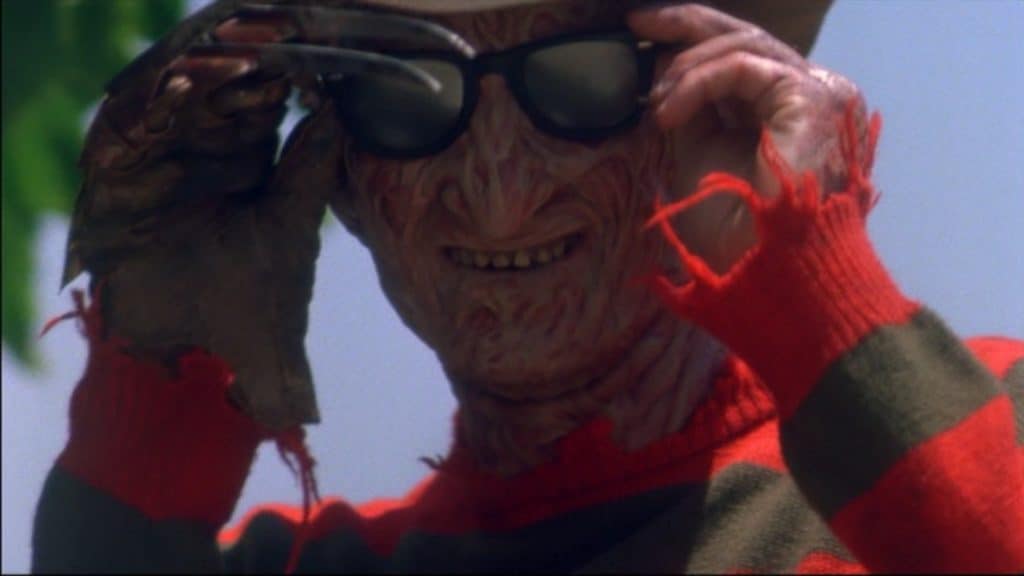 7) A Nightmare on Elm Street 4: The Dream Master (1988) – I’ll admit it to being something of a Dream Master apologist.  While it can hardly be called one of the better films in the franchise, and while I couldn’t tell you a single thing about its actual plot, it does sport some really memorable kills and creative set-pieces.  Sometimes that’s enough.  This really is the tipping point when it comes to “funny Freddy” though: something that was a great idea in the previous movie, but had already here started to feel a little stale, pushing the already tonally precarious movies into awkward comedy when they should have been leaning into the innate terror of being killed by your own nightmares.  It’s nowhere near as bad as the franchise would eventually take that characterization, but this is definitely the beginning of the end for the character’s menace.

6) A Nightmare on Elm Street Part 2: Freddy’s Revenge (1985) – Thankfully, there’s been something of a reappraisal for this movie in recent years, because contrary to what had been the popular opinion on it for decades, this movie is actually pretty good.  Now, it does suffer from some serious tonal imbalance (a franchise staple that only got worse with subsequent sequels) and the way that the filmmakers leaned into the sometimes-spectral nature of Freddy simply fell flat more often than not (his need to possess victims, his appearance in the waking world, etc…), but the film all-in-all works as a solid, scary and memorably horrific sequel to the first film.  If you haven’t watched it in a while, it might just be worth to give this one another try. 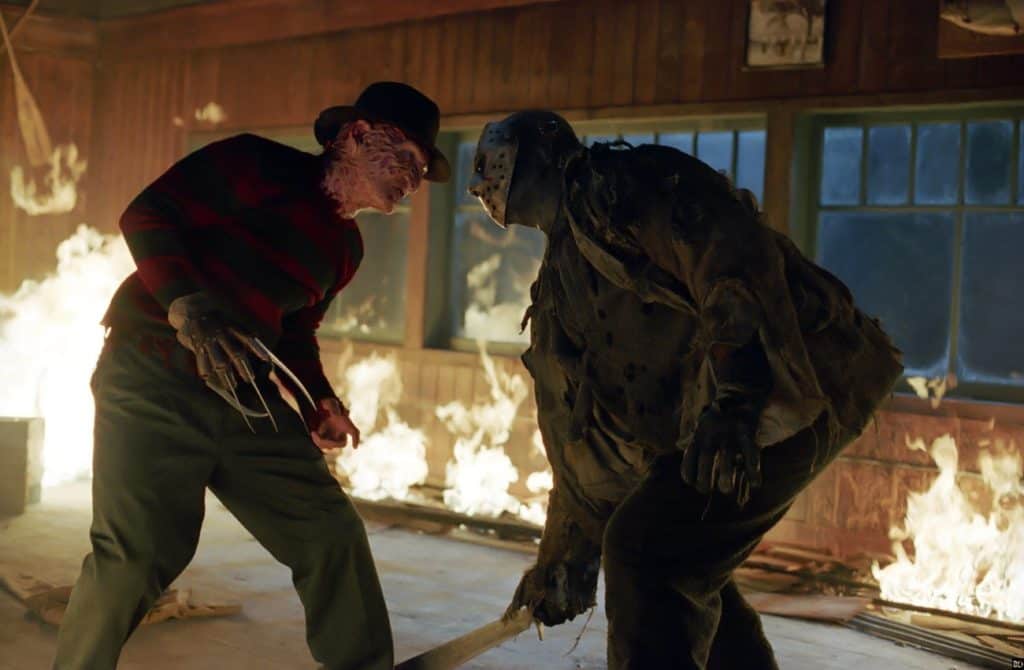 5) Freddy vs. Jason (2003) – Although not “scary” in any meaningful sense, this monster-mash crossover between the two most popular slasher franchises of the 1980s is a fun, campy romp that actually works far more often than it ever should have.  The rivalry and interplay between the two heavies is a lot of fun to watch play out, the human characters are more endearing than the expected crop of disposable teen victims, the kills vary between fan favorite homages and genuine classics in their own right.  Sure, it’s a really silly movie on the whole, but there’s more here than the sheer novelty of its stunt-premise, and I would absolutely kill to see the heavily rumored Freddy vs Chucky that Child’s Play (1988) creator Don Mancini has long cited as a passion project of his. 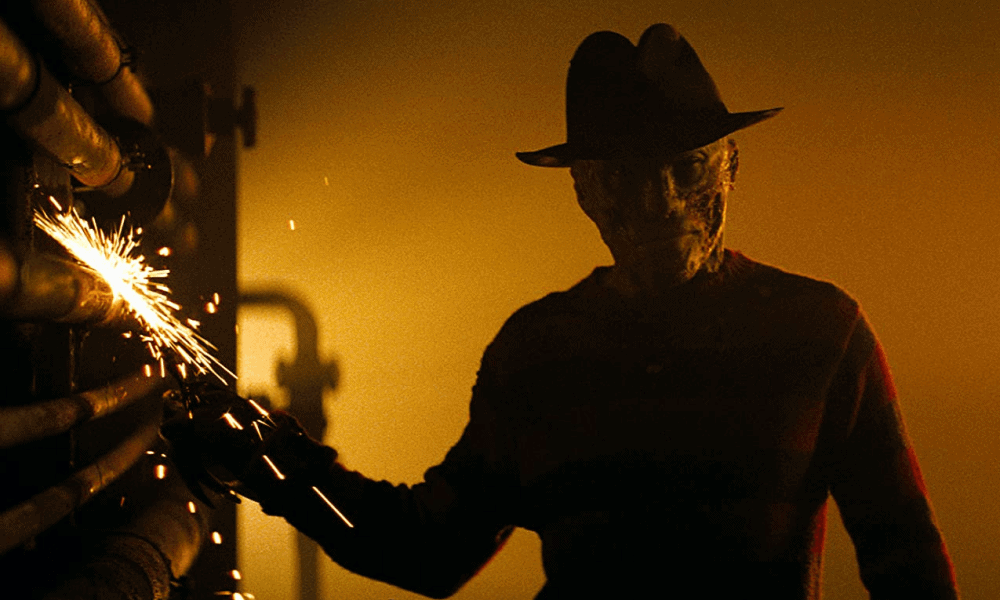 4) A Nightmare on Elm Street (2010) – For all of the hate that the 2000s horror remakes got over the years, the truth of the matter is that they’re actually all pretty good when taken on their own modest terms.  Some, like The Hills Have Eyes (2006) are legit classics in their own right.  Some, like Friday the 13th (2009), are honestly the best out of their entire franchise.  Most, though – like The Texas Chainsaw Massacre (2003), House of Wax (2005) and A Nightmare on Elm Street – are modernizations of their respective movies, mostly aiming to amp up the violence and gore while not necessarily competing with the originals conceptually.  In the case of A Nightmare on Elm Street, we get the fascinating addition of “micro-napping” to the reasons why simply going without sleep is losing strategy in the long-run, the full realization of Freddy as a horrendously burned serial child-rapist (a look and backstory that never quite made it on-screen back in the day) and a decently interesting twist on the “my parents killed a man to protect me” mystery by momentarily positing that maybe Freddy was an innocent victim of mob violence (I mean, he wasn’t, which the characters soon catch wise to, but it’s enough of a twist on the expected narrative to keep things interesting in the meantime).  Overall, it really is an impressive piece of horror filmmaking and one of the better films in its storied franchise. 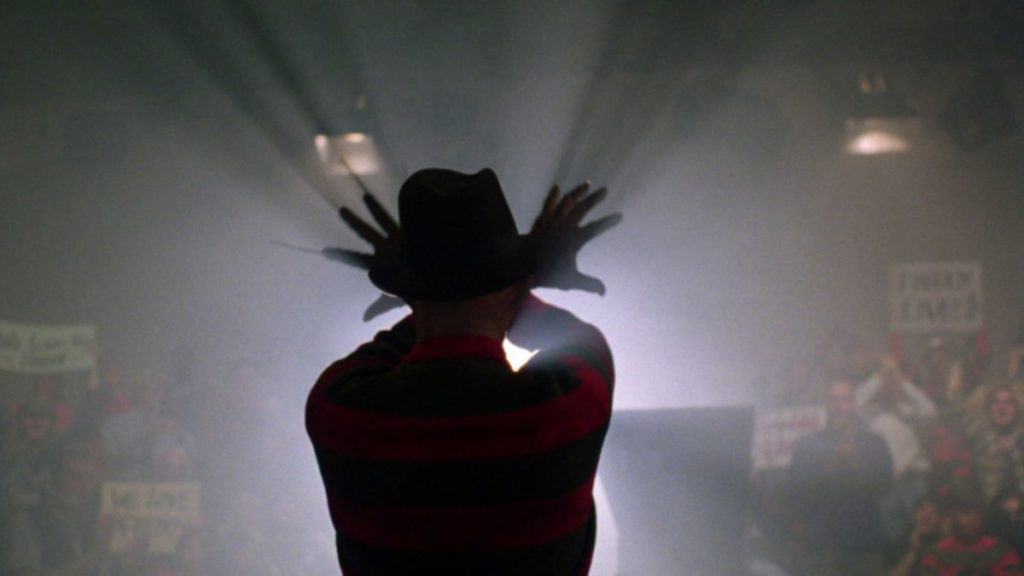 3) Wes Craven’s New Nightmare (1994) – After Freddy’s Dead, the series went mercifully quite for a few years, right up until some studio executive or another realized that the 10-year anniversary of the first movie was coming up and that they better do something to capitalize on that milestone.  Bringing back most of the original film’s key players – including writer-director Wes Craven and stars Heather Langenkamp, John Saxon and, of course, Robert Englund – Craven & Co. offer a dark deconstruction not just of this franchise in particular, but of the horror genre as a whole.  Reimagining Freddy Krueger as some acid-burned elder entity that takes the form whatever boogeyman has captured the public’s imagination most, the film grapples with the realities of the Nightmare on Elm Street brand as this pop-sensation that both stands apart from and exists in conversation with everything from the fairy tales to campfire ghost stories of generations past.

2) A Nightmare on Elm Street (1984) – Perhaps the most remarkable thing about the original Nightmare on Elm Street is just how much this movie holds up almost 35 years later.  I showed it to my sister-in-law for the first time recently and it legitimately scared her in ways that both shocked and delighted me.  Yes, there is the missing piece of Freddy’s trademark personality in this one, and both the budget and lack of technical innovation meant that the kills are extremely toned down from the places where the franchise would eventually go, but it is just pure, unadulterated, high-end craftsmanship on display throughout its tight 91 minute runtime.  The nightmare sequences are terrifying in ways that similar scenes in later franchise installments simply weren’t.  The characters were charming and endearing far beyond what was typical for this subgenre of horror.  And even though the film simply deflates in its last twenty-or-so minutes, everything before that is the stuff that dreams are made of. 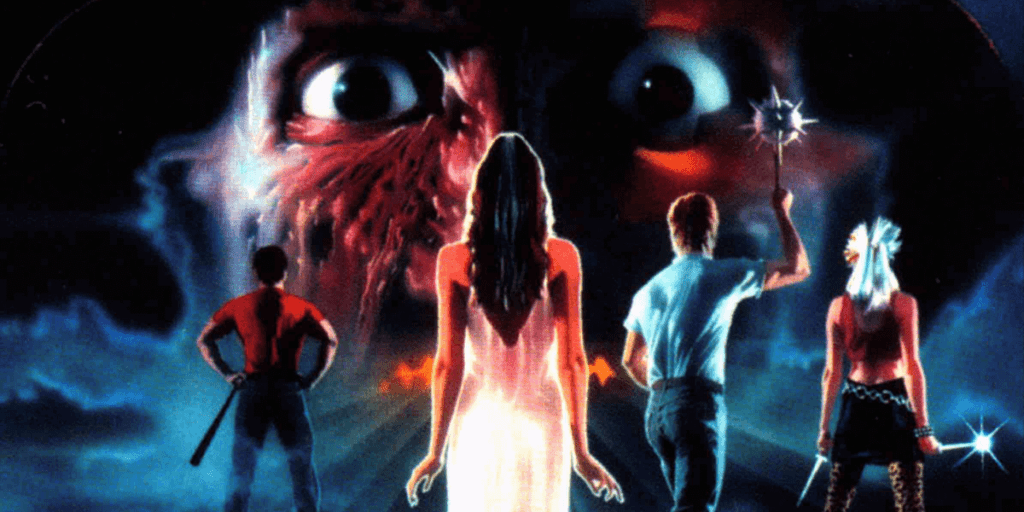 1) A Nightmare on Elm Street 3: Dream Warriors (1986) – When it comes to this franchise, Dream Warriors is the sweet spot where everything came together.  A few years removed from its debut installment, the film had the budget to pull off all of the franchise’s most memorable and thrilling death scenes.  Not only do you have Freddy’s first and best appearance as a sardonic trickster, you also have him being as dark and menacing as he was in his first two appearances.  Whereas the first two movies rather awkwardly floundered around when trying to make Freddy a physical presence in the waking world, Dream Warriors stuck to his strengths as a villain and realized the physical effects of his nightmarish machinations in the most viscerally satisfying ways.  And, of course, the introduction of Freddy’s expanded-backstory as the bastard son of a thousand maniacs – and the presence of his nun-mother’s ghost in the graveyard – reinforces the franchise’s ephemeral dream-logic better than anything it ever committed to screen.  Simply put, this is the Nightmare on Elm Street that all preceding movies were inexorably building up to and whose promise all subsequent movies failed to live up to.