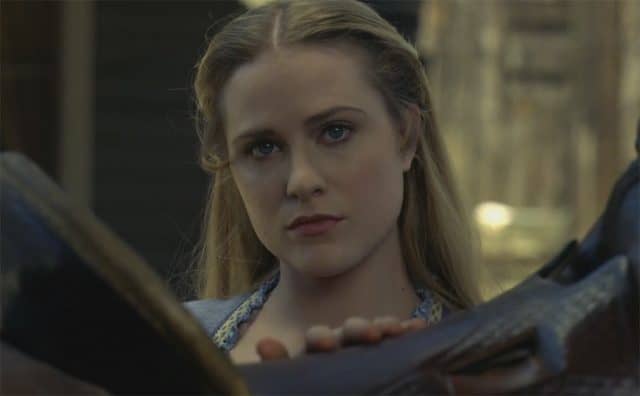 Underneath the fancy, high-concept trappings of HBO’s much-hyped new showÂ Westworld, the central conflict is one abundantly familiar to the world of science fiction: what happens when the robots realize what’s going on? Will they be as satisfied as us to exist in the redundancies of everyday life, or like us, will they begin to look for something more? There’s been plenty of intriguing material mined from that idea through the years, fromÂ 2001: A Space OdysseyÂ toÂ The TerminatorÂ toÂ Ex-Machina, and those influences felt throughout Jonathon Nolan and Lisa Joy’s much-hyped, much-delayed new drama, be it in theÂ Clockwork Orange-like milk fetish, or the conversations about the nature of evolution. In moments, it certainly feels likeÂ Westworld‘s first chapter is onto something, when pondering the existential purpose of genetic anomalies, or drawing dichotomy between its Western fantasy world, and the cold, sterilized labyrinth surrounding it. However, while “The Original” constantly teases and references digging further and defining the show’s third dimension (the “deeper purpose”, to quote the Man in Black), the show’s reverence for genre convention sometimes undercuts its attempts to find depth in its world.

On a purely aesthetic level,Â WestworldÂ delivers the goods:Â its obsession with milk (and milky-white actors) aside, the cinematography delivers both a striking Western landscape in its faux reality, and a haunting, cold atmosphere in the world surrounding it. Large, open swaths of southwestern country side are captured with beautiful wide shots, the true visualization of the illusion of endless possibility afforded by Dr. Robert Ford, the creator of Westworld (and predictably, the dude with the God complex in this story). Every shot of lush landscape is met with the equal darkness and cold transparency of the lab/office/rich playground the “customers” (aka paying humans) and “hosts” (aka robots) exist in, creating a visual dissonance that resonates deeper than some of the show’s more pointed dialogue towards these ideals, the words tasked with conjuring up conversations that the images can convey silently.

Surprisingly, the narrative ofÂ Westworld‘s first hour plays out in pretty straightforward fashion: beginning with YET ANOTHERÂ in media resÂ opening, something that’s become frustratingly common in the era of Peak TV. That aside, “The Original” is able to slowly introduce viewers to its world with surprising coherence for a pilot, establishing the rhythms of Westworld and the metal monkey handlers controlling it with a welcome precision (this reaction is most decidedly a side effect of September’s barrage of network pilots – still, it’s kind of impressive how this managed to mostlyÂ make sense). There are plenty of moments where we’re privy to goofy tropes like Secret Whispers and secret sayings dripping with metaphorical reasoning (or Shakespeare quotes – both are present), but “The Original” is able to find its footing with a strong, clear vision for what its larger questions were, and why some of these people might be inclined to answer them.

Being that this pilot is only 70 minutes long (you know we’re living in a weird age when I’m happy a cable pilotÂ onlyÂ runs 70 minutes), however, some ofÂ Westworld‘s attempts to dive a bit deeper fall a little flat. The Man in Black’s search to find the “true game” hints at a Big Reveal of some sort in the future, the kind of sense-dulling twists that have robbed so many other shows of their narrative momentum – his histrionics about the nature of Westworld aren’t very interesting, especially when we’re privy to the pleasure he gets from raping Dolores, the show’s de faco protagonist, and the longest robot in commission in Westworld. He’s a stock Villain with Deeper Purpose in this first hour, only elevated by Ed Harris’s innate ability to chew scenery with his eyeballs – whereÂ WestworldÂ really finds its footing is in smaller moments, like Dr. Ford lamenting the stalling of evolution in human beings, who have taken control of the environment, or Dolores’s father triggering memories of his past self, a de-programmed version of himself that caused an cognitive dissonance in his artificial intelligence.

While some of the promise of the pilot is held back by its embracing of traditional genre conventions, casting habits, and Big Plot, moments like those offer promise thatÂ WestworldÂ won’t get stuck in the same loop its characters are constructed to embody. There are plenty of strong performances in this pilot, and when its not busy leading audiences on with allusions to other worlds, or relying on evocative, but confusing imagesÂ (why do they just keep every broken robot? Haven’t they seenÂ iRobot?!!!), those performances bring the material to life, twisting the typical conventions of American Western portrayalsÂ with with unsettling precision. Like the rest of the show, it’s still to be proven whetherÂ WestworldÂ can take this ball of conventions, thoughts, ambitions, and blood buckets to the “higher level” it constantly alludes to, or whether its attempts to posit on the nature of everything from memory to destiny are just superficial allusions of grandeur.