Home
TV News
What Does the Future Hold for all The “Chicago” Shows?
Prev Article Next Article 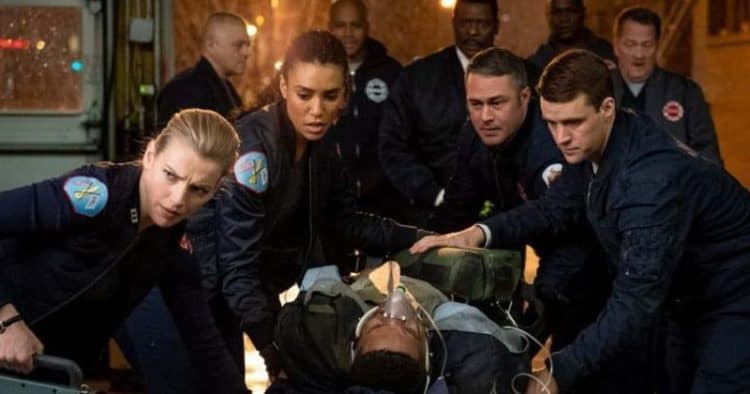 According to OneChicagoCenter, following their holiday season off, the men and women of the Intelligence Unit on Chicago PD, the incredibly attractive firefighters on Chicago Fire, and those amazingly gorgeous doctors and nurses on Chicago Med will be returning to action at the start of the new season on Wednesday, Jan. 8th.

At our house, we call it “Chicago Wednesday” and it’s our favorite night of the week thanks to NBC. Why? Well, because they made the excellent decision to put all three “Chicago” shows on the same night for all of us lovers of “Chicago Med”, “Chicago Fire”, and Chicago P.D.”, of course. And, they’re all on Wednesday nights in that exact order starting at 8 p.m. EST. If you’ve never watched any of these shows, then you’re probably saying “What’s so great about those Chicago shows anyway?”

That’s an excellent question and the main thing that’s great is the writing. It never seems forced and always seems completely realistic for that particular genre and setting. Every single week, the writers come up with a new and interesting dire situation that is just as engrossing as it can possibly be. And, you can tell that they’ve done their research as each storyline rings true for that particular area of expertise, i.e. medical, fire, or law enforcement. Add to that the well-written well-rounded characters, and each show is a major hit in and of itself.

One of the other great things about Chicago Wednesday is the crossovers. For starters, P.D.’s Jay Halstead (Jesse Lee Soffer, whom you might remember from the soap opera “As the World Turns”) and Med’s Will Halstead (Nick Gehlfuss, who you might remember from “Shameless” and “The Good Wife”) are brothers. And, not only do they look alike, but they also seem to be steering through life using the same moral compass. They’re both good guys who are devoting themselves to helping people in their own special way. There are plenty of other crossovers, including one coming up that will be featuring both PD and Fire as they work together to solve an overdose case. That particular crossover will also be featuring the return of Brian Geraghty as Burgess’ former partner/lover Sean Roman, according to eOnline.

If I had to choose which one of three has the most charismatic cast, I know I would be hard-pressed to be able to name just that one single show. Why? Well, that’s because they’re all so good, from the incredibly good-looking docs and nurses on Chicago Med to the hunky firefighters on Chicago Fire. And, let’s not forget those thrill-seeking well-trained cops on Chicago PD. Hopefully this season, Jay Halstead won’t be in any life-threatening situations like last season when he spent 25 percent of his screen time dying (or looking like he would). Thankfully, he didn’t and is back for the new season. And, we’re glad that Jesse Lee Soffer will be gracing our TV screens again this season along with the gruff Hank Voight (Jason Beghe) and the rest of the amazing cast. We do still miss both Erin Lindsay (Sophia Bush) and Al Olinsky (Elias Koteas) who are no longer on the show. The other two shows, Med and Fire, also have superb casts that keep us intrigued week after week.

A Whole Lotta Kissin’ Goin’ On

We’ve all seen plenty of TV hospital dramas, from daytime soap operas to prime time steamers like “Grey’s Anatomy”. One theme seems to be standard in all of them and that is romance between co-workers. And, “Chicago Med” is no exception. That highly anticipated kiss between Dr. Marcel (Dominic Rains) and Nurse April (Yaya DaCosta) occurred when April’s soon-to-be fiancee, Ethan (Brian Tee), was deployed with the military (and, BTW, he looks absolutely gorgeous in his uniform). They decide to keep the kiss a secret but who knows when it might come out? When Ethan returned, we thought for sure that April was getting ready to spill the beans and ruin everything but, as it turns out, she was just telling him about her infertility. It doesn’t deter him, however, and he proposed, she accepted, and it looks like they might live happily ever after. On Chicago Fire, Jesse Spencer (Casey) has stated that the show is definitely continuing to build up his friendship with Kara Kilmer (Brett). That sexy slow burn just keeps on smoldering and there is clearly an attraction going on there. So, we’re still waiting for that first kiss!

At the start of the season, P.D.’s Kim Burgess (Marina Squerciati) found out that she’s pregnant. Of course, Ruzek (Patrick Flueger) is the baby daddy. His initial reaction to the news is less than comforting to the expectant mother but later, he warms up to the idea and wants to help. However, by that time, Burgess isn’t very accepting of his offer but eventually they call a truce and decide to be friends and raise the baby together. Hmmmm, can’t wait to see what Roman’s return will do to that relationship! Now, on “Chicago Med”, there’s plenty of babymaking drama going on as well. On this side of the coin, however, it’s not an unexpected pregnancy that brings on the drama but infertility instead. For added drama, April will soon be undergoing IVF so that she and Ethan can start a family.

See What You’ve Been Missing

So, if you’ve never watched the amazing shows on Chicago Wednesday, tune in to NBC and see what you’ve been missing. I know you’ll be surprised both by the storylines, writing, and fantastic acting that you’ll get to see every Wednesday. Don’t miss a show, however, or you could be missing some great moments in TV viewing. .

Gale Robinson is a freelance writer who contributes regularly to clients on writing sites like HireWriters and Textbroker by writing blogs, press releases, web pages, reviews, and product descriptions. A former screenwriter, Gale and her late husband, Richard Robinson, wrote screenplays for major motion pictures that include the hit movie “Piranha” that went on to become several sequels over the years, “Kingdom of the Spiders” starring William Shatner, “Poor Pretty Eddie” starring Shelley Winters and Slim Pickens, and “Highballin” starring Peter Fonda and Jerry Reed. As a businesswoman and entrepreneur, Ms. Robinson started a company in California with five local stores and a popular website called 4moneyandmore.com. After that, she started dedicating her time to writing and affiliate marketing. To date, she has written 1,629 articles for Textbroker and 1,023 for HireWriters on subjects ranging from advertising, affiliate marketing, article recaps, blog posts, SEO, web pages, and automated content marketing to health, beauty, and fashion, boats, sailing, and travel plus pets, lawn and landscaping, Real Estate, legal, and entertainment. Ms. Robinson is currently working on a number of web pages and reviews for a well-known company in Georgia covering television, movie, and product reviews. Could there be more screenplays in the works? It’s quite possible.