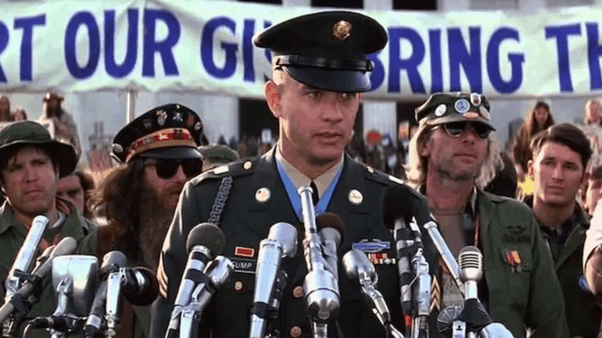 When thinking up a list of ‘what the hell did that person say?’ the speech that was delivered in Forrest Gump is one of those that people might bring up simply because of the manner in which his speech was cut off to begin with. The Vietnam War was, for lack of a better explanation, one of the most divisive moments in American history that can still be remembered, and that includes today since the nation was split on whether American troops belonged in that particular war to begin with. Many soldiers came back as only shells, battered and beaten human beings that had seen horrors that many of us couldn’t even comprehend and a torrent of abuse from their own countrymen upon return that should never have happened. Forrest was one of the lucky ones considering that his sense of right and wrong was far more simple than anyone else. He did what he could to better the lives of others and to insure that they were able to come home in the first place, despite being broken and battered. The Congressional Medal of Honor isn’t just handed out to anyone after all, and typically represents an action that might be considered foolhardy but was also above and beyond what was expected of a soldier.

As it’s been revealed however, Forrest’s speech was rather simple as he spoke of Bubba, their conversations, and for the most part how some men went to war and came back in far different shape. Unfortunately to keep things accurate at that time the US government didn’t care for anti-war speeches and were known to make attempts to keep people as quiet as they could. Those that spoke too much and too often were discredited now and again while those that kept their mouths shut were rewarded. Forrest being Forrest however, he had no idea just why what he was saying would have been frowned upon, even if what he was saying was more or less a personal matter and not a reflection of the war itself. The unfortunate fact, and this is something that happens in the current era as well, is that people will place meaning into a word or phrase that wasn’t there in the first place and spark a fire that can burn out of control quickly. Any sentiments concerning the Vietnam War were often watched and paid attention to very closely by a lot of people, and those that spoke out openly against the war weren’t too popular with the military, though in truth the military wasn’t too popular with a lot of people in those days.

Whether or not protests were really disrupted like this is hard to say, but there is documentation stating that peaceful protests were often broke up using violence. The overall attitude of many people wasn’t always to be against the war in Vietnam, nor to even criticize the military, but to openly call the war a huge mistake. Obviously there were plenty of people that opposed the war entirely as the draft that helped to bolster the numbers of the US military took heavily from minorities and lower-class citizens, dumping young men into the meat grinder as some would say in order to fuel the continual war machine that was apparently fighting communism abroad. Everyone has their own opinion of Vietnam whether they were there or not, but the sad fact is that if you weren’t there then you might as well be reciting history from the various sources that have written on the subject. As to those that were there and can recall just what happened, looking into their eyes is usually enough answer as to why some people are reluctant to speak of it. Not everyone had a horrific experience, but those that saw combat often don’t wish to speak that much, if only because they know what real combat is like. So what’s the difference between them and Forrest? There’s not much difference really, save for the fact that Forrest had a useful filter to keep himself from freezing: Jenny.

Keep in mind that Jenny had told him to run when he was in danger, and he took her words to heart. It’s true that he went back again and again in order to save whoever he could, but Forrest ran, and he ran, and he ran, into the danger, out of the danger, back in again and then back out. Like it or not, there are very few people in the world that could do this, that could witness the bodies of those they’d called friend or at least a part of their squad, lying in pieces or dead on the ground, and not break. Forrest had Jenny’s words to keep him going, and the desire to save his friend and those in his unit. That’s kind of hard to sum up in a short speech.