It’s almost time to bid adieu a show that people didn’t give a chance and when they actually did put aside the snide comments, paid attention and listened… it was too late.

Dollhouse will have its final curtain call tonight and like any other Joss Whedon apocalyptic production, expectations are high. The stakes are high and the bets are in: will Dollhouse go out in a bang and prove to the naysayers that they were wrong, even going as far as listing reasons why it should be cancelled? Or will it prove the naysayers right in their assumption of it being a bad experiment?

Well, in my eyes, Dollhouse was never a failed experiment. It was a look in the darkest aspects of humanity without demons or monsters serving as avatars for problems that manifest the human soul. It dared you to look at the world for what it was and where we are headed, and dared you even further to acknowledge and talk about the issues at hand: morals, human trafficking, greed, the dark side of power, and control. These issues are around us and Joss Whedon unveiled them by asking people to remove the rose-colored glasses for an hour and to glance at the craziness that happens when we eat, study, or sleep.

Did Dollhouse drop the ball sometimes? I would be a fool to say that they didn’t, but a lot of other shows that are given common praise have as well. But that’s beside the point. One of the finest TV shows in history is about to end and here’s what I would like to see transpire in it’s last hour:

If you haven’t seen the game changing unaired episode from Season One, “Epitaph One”, then you missed one of the greatest hours on TV that Whedon has produced. It set up tonight’s episode as well as all of Season Two, but after last week’s episode, I can’t help but to question some of the glaring and nuanced aspects of the episode. If you haven’t seen Epitaph One then I suggest you skip the next two paragraphs and go to my second wish…

In “Epitaph One”, Whiskey (Amy Acker) is the sole Doll left in the Dollhouse. When the Actuals, people who have never been

imprinted, show up in the Dollhouse, it is Whiskey who helps them escape and hold back the “butchers” by gassing the place. Whiskey stays behind to save the others. So this leaves me to wonder then if that supposedly happened (because the remaining group of Actuals will appear on “Epitaph Two: Return” tonight), then how did Whiskey make it back to the Dollhouse? Last we saw of Whiskey, she was lying unconscious in the basement of the Rossum building after a battle with Echo. Whiskey also was Imprinted with a version of Clyde, one half of the founders of Rossum Corp. Oh and did I mention that the basement area blew up?

So, in short, how did Whiskey manage to get back to the Dollhouse? Did Echo and the Bunnymen take her back there and wiped the Clyde imprint from her brain? One would suggest that is what happened, but what if we are wrong? Also, “Epitaph One” was mostly told through flashbacks that took place back at the Dollhouse, so wonder why they would go back there where Rossum could find easily them? 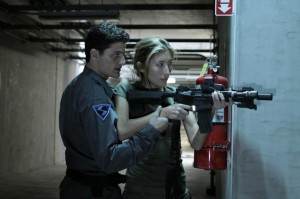 #2 – A Semblance of a Happy Couple

If any of the previous blow out battles of Joss’s productions are any indication, then this one hopeful answer will not come. Buffy, Angel, Firefly/Serenity, nor Dr. Horrible ended well in this category, so I am praying that the only couple left, Anthony and Priya, make to the credits in tact and holding hands. I would even accept an Echo and Paul happy ending, or hell, an Adele and Topher pairing; just as long that I see some happy, I am cool.

Am I the only one who thinks that she should be a part of the crew since she was in on the takedown of Rossum? If she’s not with them then she has to be somewhere dead. The one thing about Rossum that scared the crap out of me is their ability to track anyone they are looking for, which for Ivy, doesn’t bode well. Can we at least get a mention of her? Please?

If the writers/producers of Mutant Enemy know how to do anything other than give us great TV, it is organizing a good fight, catfight or otherwise. Since this is do or die, I am hoping to see one last smackdown with the forces of good and evil.

I know I am reaching pretty far with this one given the finales of previous Whedon productions, but those same productions have carried on in different mediums. Buffy, Angel, and Firefly have comics that take place after their respective shows ended and are all produced by Whedon and other Mutant Enemy writers. Firefly got the big screen treatment in Serenity and Dr. Horrible is about to get a sequel soon. See the trend here?

But with in an interview with Maureen Ryan of The Chicago Tribune, Joss Whedon states that he will wrap up Dollhouse, because the concept just wouldn’t work in other mediums, such as film or comics. And he sounded adamant about his stance as well, so I just beg of him to not leave my mouth dropped like I did during the Angel finale. Please, Mr. Whedon, I beg of you.