Home
Movies
What if the Jedi Won Order 66? This Animated Film Shows It 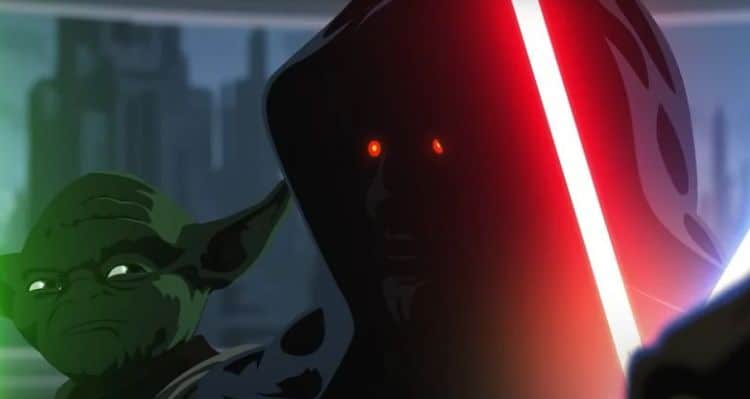 To be perfectly honest it would have been nice to see how this would have played out, but it wouldn’t have worked initially since too many Star Wars fans would have been shouting that it wouldn’t work with the original trilogy. Well of course it wouldn’t, that’s not the point. But with the inclusion of multiple universes and the likelihood that different actions would be able to create different timelines it’s fun to think of what might have happened had Order 66 not been as successful. The point being made about the Jedi and their battle senses is a lot more believable than to think warriors that can sense danger before it ever happens wouldn’t be able to detect the shift in the allegiance of the clones or be too slow to react once they felt the malevolence as the clones suddenly decided to see them as the enemy. Many would argue that the Jedi aren’t this aware, but there are too many instances to talk about that would indicate otherwise. In Episode 2, Attack of the Clones, Anakin and Obi-Wan sensed the danger to Padme only moments before the insects that were let loose by Zam Wessel would have done irreparable harm to the senator. In Episode 3, Yoda sensed what the two clones behind him were about to do before they could fire upon him, so it’s definitely sensible to think that more Jedi, especially those that were uniquely attuned to the Force, would have survived.

The battles between the Jedi and the two Sith were interesting to theorize since it would appear that Palpatine would still fair pretty well against four Jedi, but Aayla Secura would still go down since she wasn’t quite at the same level as Yoda and Ki-Adi-Mundi. Plo Koon and Obi-Wan against Anakin still sounds kind of odd, but given that Obi-Wan was more of a team player and knew how to work with his fellow Jedi than Anakin did it wasn’t too hard to imagine that something like this would happen, that Skywalker would be overwhelmed somehow. As for Sidious, it was actually kind of satisfying to see that Yoda would bring about his end, having thought a few steps ahead of the dark lord before finding a weakness in his methods. In truth, Mace Windu would have ended Palpatine if not for Anakin, but given that Yoda is the one that helped to train Mace, it’s easy to think that with a bit of help he would be able to overcome Sidious. The idea of locking Anakin up would indicate that Obi-Wan and Plo Koon had devised a way to keep him from accessing the Force, thereby rendering him largely powerless. But with Anakin, it would be necessary to cut him off from the Force entirely, as it’s been done in the comics and books before. But it would still be wise to restrain his fingers since if anyone remembers, Anakin is a bit of a tinkerer and can do virtually anything when it comes to machinery or tech that he can get his hands on. After all, the guy built his own podracer when he was a kid, so it’s fair to say that he could figure out just about anything with mechanical or technological parts so long as he could gain access to it.

As for Padme surviving and Bail Organa becoming the Supreme Chancellor, this would certainly usher in a time of peace in the galaxy, since the Separatists were largely beheaded without their leaders and legions, and the Sith were, for the most part, dead. One still has to wonder if Palpatine would have already set his cloning process to work, or if he wasn’t bound to do this until much later. But as Luke and Leia would both grow up knowing who their mother and father were, it would be a legacy to live up to and to strive above, but it would likely come to pass that both of them would have been much stronger in the Force. It’s interesting to think though that neither one of them would have ever known the hardships that came with being a part of the Rebel Alliance, and that Luke would never have to know what it was to lose his Uncle Lars and Aunt Beru. It’s fair to say that he might never get to know them at all if the Jedi continued to eschew attachment as they had before. But Leia would never become a senator, possibly never meet Han Solo, and therefore the smuggler and Chewbacca wouldn’t have entered the story in the same way. There’s so much that would have changed in this manner that it’s hard to comprehend just how the story would go as a result. But it’s certainly worth thinking about since it could make for an interesting story.