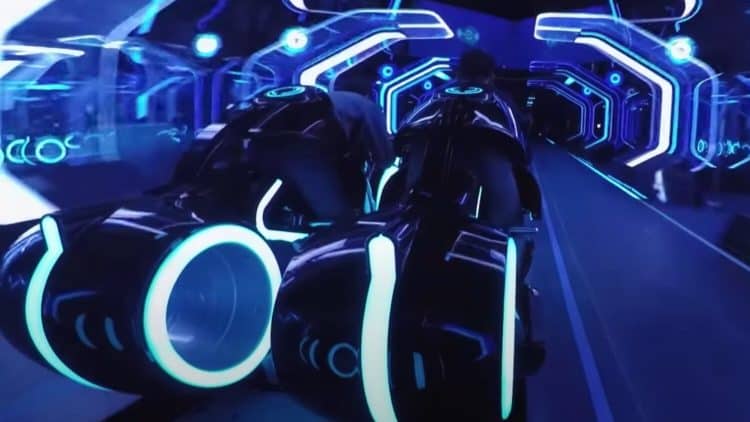 It’s hard to really get the sense of speed that goes with this ride since it claims to be the fastest rollercoaster in Disney history, though it’s not something I’ll bother refuting at this moment since the ride looks kind of amazing and as though it would be a trip to experience. From the lighting and the sounds to the design, this doesn’t feel entirely like the type of ride that everyone would fully enjoy due to different sizes and possible weight restrictions, but it does look like something that would be fun all the same for those that can experience it. In a way, the Tron Lightcycle looks almost like another version of Space Mountain that was refitted with different lighting and graphics to go along with this unique experience. But don’t let my simple explanation take away the fact that it does look like it would be a very fun ride if a person could make their way to Shanghai Disneyland. Right now there are a lot of people that might want to make that trip just to get out of the house, or possibly out of the country, but obviously that’s easier said than done at the moment.

Looking at this ride the only thing that could really compliment it would be another attraction that might pit guests against another opponent in the same way that Tron: Legacy depicted Sam Flynn taking on Rinzler during his time in the game. How fun would it be to be able to replicate the light-disk battle and give fans another bit of enjoyment that Tron has to offer? For a movie that hasn’t gained a lot of love when compared to many of Disney’s other properties, Tron has a lot of potential to tap into if someone would step up and really let loose with the ideas. This is, unfortunately, one of Disney’s biggest perceived failings at the moment, they don’t take chances with properties that could go somewhere and they focus on properties that they’ve already half-wrecked and might need to delete and redo at some point. Admittedly, there are a LOT of Disney properties out there, especially since the Fox merger, but trying to take on some of them that really haven’t done much and continuing to push for ideas that are less than well-received has become a common practice of the Mouse House, while actually paying attention to rational ideas of where to go and what to do with certain properties hasn’t been the norm. True, I’m just a writer and not a businessman or a CEO or a designer or hold a degree of interest in any other profession, but as a longtime fan, it’s enough to know what people want to see, even if said people aren’t always willing to pipe up and say it.

Too many fans tend to go along with what Disney says because “Disney knows best” apparently. That’s hard to argue against since trying to tell anyone how to run their business is a less than a popular decision, but there are times when a lot of people tend to raise their hands in the air while shrugging their shoulders and asking ‘what in the hell are you doing?’. That’s happened in regards to Disney a lot. People might not know the business side of Disney as well as they should, or would like to, but it’s hard to imagine that Disney really has their collective finger on the pulse of the fans, or if that finger wandered sometime ago and is stuck in a less than desirable spot. Considering that Tron is a great story that just needs a bit of development to really work and to come to life in a way that could entertain the fans in a huge way, leaving it to sit and collect dust is kind of depressing since it means that Disney didn’t really give up on it, they just don’t have the overall interest of pushing it as much as they might anything else. It’s hard to get down on Disney completely since they have brought quite a few things to bear that have been great when they use storytellers that can actually entertain people and concepts that make more sense than a Jedi master drinking green milk from a giant sea cow. Thankfully Tron: Legacy didn’t go crazy and have Flynn go milk a digital animal, but that might have actually been comical compared to what’s already been seen.

In any case, the Tron Lightcycle does look like fun regardless of my rant and it does feel like it would be a burst of acceleration that would be worth the trip and at least worth the cost of a ticket to get in, especially since there’s so much else to see before and after this thrilling ride.