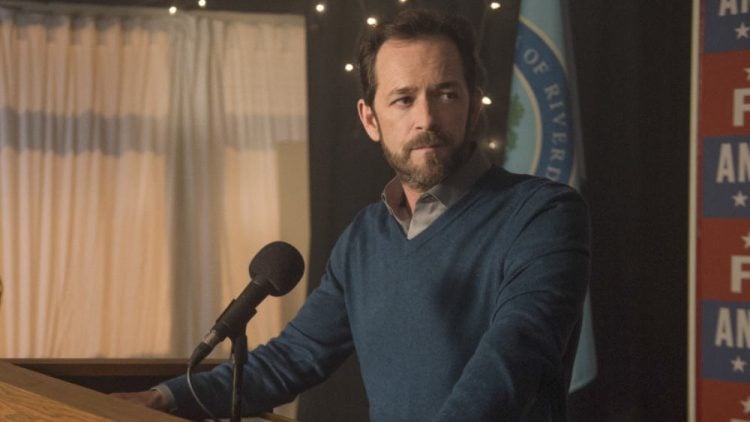 Taylor Charendoff isn’t kidding when stating that Luke Perry’s passing shook up a lot of people. Tragic as it was and remains, his death still throws a big wrench in the plans for Riverdale and what might happen in the next season, though it does seem as though there’s a plan in place. As you already know Fred Andrews just kind of up and left in season 3 and there was no real explanation for it, but there is one coming apparently and the appearance of Molly Ringwald as Archie’s mother did manage to perform some kind of damage control to the plot since it seems that it pacified some people. But with the next season coming in October you can bet that fans are going to be wondering just what’s going to happen and how the show will address Perry’s absence. It’s tragic enough knowing that he passed back in February, but giving no closure to his final character seems like it would be something that a lot of fans would find it hard to look past.

Since Riverdale first appeared it’s been one those shows that some people sit down to and thoroughly enjoy with great relish as they watch one episode after another, while others might make their way to it tentatively and with a hint of suspicion. Rest assured though a lot of people have come to enjoy the show in a big way since it’s taken some of our favorite characters from pop culture and turned them into versions that are easier to relate to and are definitely updated to fit into the modern era. Tamara Fuentes and Carolyn Twersky of Seventeen remind us that this show is not the type that typically brings everyone back from the prior season, but it’s likely that a few folks will be returning, and it’s also likely that we’ll get more answers, hopefully, than questions this time around.

Amanda Lundgren and Emily Tannenbaum of Cosmopolitan seem to be sold on the idea that Archie’s mom will be a much bigger presence in the coming season, and it’s hard to argue. It’s also a belief that Varchie will be thriving again, Hiram might actually get what he has coming to him, and there will be a lot more scheming in general throughout the season. One thing is pretty certain that’s the fact that senior year is going to be a bumpy ride for the lot of the gang as they try to navigate their way throughout the season while trying to keep themselves from getting into too much trouble.

Of course Fred Andrews’s death is going to be addressed and it’s going to be done largely as an homage to Luke Perry, as the show wants to pay their proper respects to an actor that was loved by just about everyone and respected by so many. The fact that his character’s arc wasn’t fully explained is a sticking point for a lot of people but rest assured it will be addressed when the next season returns. Molly Ringwald could possibly be a nice addition to the show from this point forward but given the track record of the program so far it seems fair to state that things might not be as easy for her as we might want to think. After all this isn’t exactly the Riverdale that we remember from the comics, though if it was it’s fair to say that the show might not be nearly as popular. Archie and the bunch have managed to capture the imagination of the fans once again in a very different way since where once the entire thing was a wholesome and less than offensive comic it’s now a show where things have entered the grown-up zone and therefore have become something rather serious in nature. It’d be interesting to see just how many people who, being honest, expected this kind of thing to emerge, ever. If you ever read Archie comics then you know very well that this version of Riverdale is something far different than anything that was ever published in the original comics.

You could say that it’s a natural progression since Archie isn’t the only one to get an upgrade from the comics to live action. But had things been kept the way they were in the comics it does seem as though Riverdale would have been more like a wholesome comedy that would have been cute and endearing but not at all as popular as it’s been thus far. The cast has made this into a show that people have been willing to sit and watch each season thus far, and it doesn’t seem to be slowing down as the group continues to push forward no matter the challenges that are thrown in front of them. It’s going to get even more interesting come October.