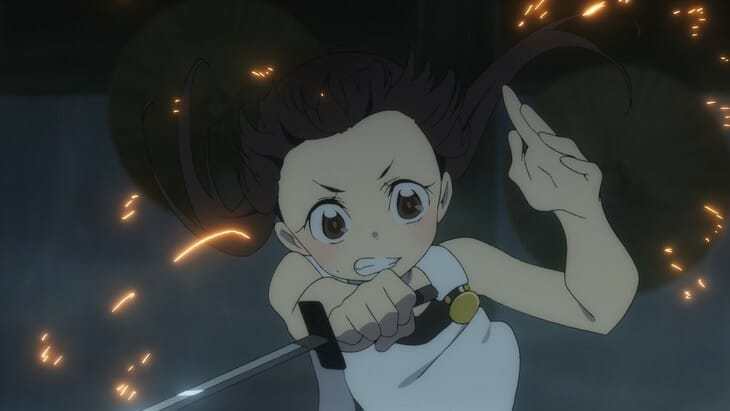 Black Fox is a Japanese animated movie that is set to come out on October 5 of 2019. However, the movie will be receiving its world premiere at the Crunchyroll Expo, meaning that this is something that interested individuals might want to check out. Here are some of the things that we know about Black Fox:

The Gist of the Story

We know a fair amount of information about what we can expect from Black Fox’s story, which is based on the trailer as well as other sources of information. For starters, the setting is a futuristic city of some sort, though not so much so that it has become unrecognizable to our eyes. However, it is clear that Black Fox isn’t set in the near future of our world so much as the near future of a more fantastical version of our world.

Regardless, the protagonist is a girl named Rikka. The trailer makes it clear that she has been trained in the ninja arts of her family by someone who is presumably her grandfather, though it is interesting to note that her strongest familial relationship is with the father that she idolizes, who is a scientist who seems to be involved in robotics research. Unfortunately, Rikka’s family comes under attack at some point, with the result that Rikka is forced to fend for herself upon losing both her father and her presumed grandfather. Having said that, the trailer plus the rest of the promotional materials make it clear that Rikka won’t be totally on her own, seeing as how she will have assistance in the form of an esper named Mia and a supportive roommate named Melissa.

As for the name of the movie, it refers to the secret identity that Rikka will be taking on over the course of her search for revenge. Naturally, the secret identity comes with a black fox mask, which is a part of the full-blown costume that comes with it. Amusingly, neither of Rikka’s two allies show the same interest in disguising themselves, though to be fair, it is unknown whether the short scene of them standing together while backlit by what look like searchlights is supposed to be in-story or not.

It Has Ninjas with Superpowers

By this point, it should be clear that Black Fox is a story with ninjas with superpowers. Based on this, some people might think Naruto. However, it is important to note that Naruto was inspired by existing storytelling traditions in Japanese culture. In short, ninja refers to people in pre-modern Japan who specialized in tasks such as espionage, reconnaissance, and carrying out surprise attacks on unsuspecting targets. As such, it can be useful for interested individuals to think of them as a combination between spies and special forces. There are people who believe that the ninja were distinct from the samurai, but the truth of things was much more complicated than that.

Essentially, the samurai were a military nobility that underwent enormous changes over the course of their existence. As such, they tended to be every bit as pragmatic as their counterparts in other cultures in other times, as shown by the enthusiasm with which they took up firearms during the Sengoku period. Naturally, this means that samurai were perfectly willing to make use of tactics associated with the ninja, which is why some of the most famous ninja ever were also samurai. For instance, Hattori Hanzo was one of Tokugawa Ieyasu’s retainers who made major contributions on multiple occasions, with an excellent example being the time that he helped Ieyasu return home when Ieyasu was put in a very isolated and thus very dangerous position by Akechi Mitsuhide’s rebellion against their mutual overlord Oda Nobunaga. Likewise, Hanzo’s supposed rival Fuma Kotaro served the Hojo clan, who were the ones who once held the territories given to Ieyasu by Toyotomi Hideyoshi in exchange for Ieyasu surrendering his ancestral homeland.

Regardless, a number of ninja managed to make names for themselves during the Sengoku period, which is one of the most storied parts of Japanese history. Over time, more and more fantastical elements were introduced to the stories of these figures with the result that they picked up supernatural powers such as invisibility, shapeshifting, control over the elements, and even splitting up into multiple bodies. As such, when Japan started telling ninja stories in new mediums such as cartoons and comic books, these elements carried over, thus resulting in Naruto, Black Fox, and numerous other productions centered on fantastical ninja.

It Has Undergone Some Serious Changes

People who have been paying attention to Black Fox since the start might remember hearing something about it being an animated series that would come paired with a live-action series set in the past of the same setting. If so, they didn’t hear wrong. Instead, Black Fox seems to have run into some serious production issues along the way, which is why it is now a movie rather than an animated series. This is particularly clear when one learns that the movie doesn’t actually wrap up its main plot but instead serves as something of a teaser for more material to come, meaning that in a very real sense, it can be considered four episodes of a standard animated series compiled into a single animated movie that serves to set up potential sequels. Having said that, this isn’t necessarily a bad thing because being a movie rather than a series means that Black Fox doesn’t have to be squeezed into the very strict broadcasting schedules of the latter. Something that can have a very noticeable detrimental impact on the quality of such productions.

Regardless, Black Fox is coming soon, meaning that interested individuals won’t have to wait for long to see everything for themselves. On the whole, it sounds like it could have potential, harboring a mix of the familiar and the unfamiliar. After all, the marketing for the movie suggests that it is a very traditional ninja revenge story, though nonetheless differentiated from its counterparts by its unusual setting as well as its choice of a young female protagonist. Combined, these elements could very well appeal to people who are looking for a fresh take on a well-established genre.