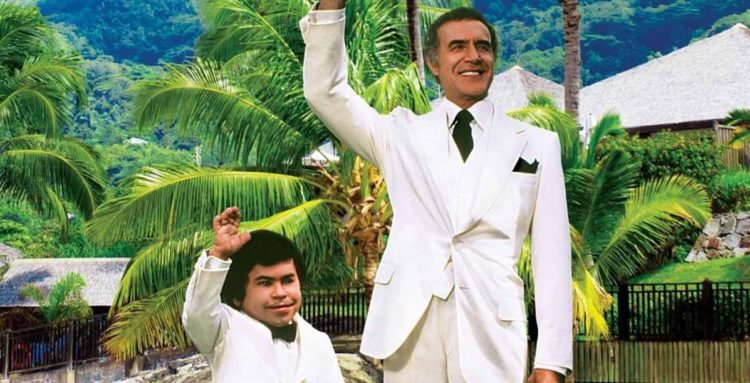 So far the biggest thing we know, apart from the casting, about the reboot of Fantasy Island is that there will be no Tattoo. It seems almost wrong to do this reboot in such a way as Herve Villechaize’s character was one of the best known aspects of the entire thing, but it does seem as though some folks think it might be in poor taste to send someone else in to play the role. That seems a bit hypocritical really since those with dwarfism, as Herve had, have been playing key roles in movies and TV shows for a while now and no one has really seemed to complain, apart from those that think such individuals are being exploited. It’s a funny thing, Hollywood employs people of all sizes, races, both genders, and of all religions but someone always seems to find the means to complain about it. John Witiw from CBR writes that it might in time come about that another character could possibly be the next Tattoo, but despite Peter Dinklage actually taking on the persona of Herve in a movie titled My Dinner with Herve, it doesn’t seem likely at the moment.

Casting Michael Pena as Mr. Roarke is kind of an odd choice, despite the fact that he is a proven actor and has a great number successful acting credits under his belt. But without Tattoo it’s going to seem a bit lopsided as one might think. The pair kind of made the whole series to be honest and it might not even feel like Fantasy Island without hearing “Ze plane, ze plane!” You can imagine that Herve probably got a little tired of repeating that line any time someone asked him to, but at the same time it was iconic since it belonged to the show and was one of the reasons anyone tuned in sometimes. The fact that the reboot won’t have it is kind of disconcerting since it seems to indicate (surprise surprise) that reboots are taking less and less from the source material when they bring something back in order to put their own spin on it. So far it would sound as though everything is going to be updated, which is understandable given the different eras in which the original and the reboot take place. But now and again it would be nice to have a throwback that at least pays some homage to the original.

Something about this show has appealed to a lot of people over the years, and it did reappear back in the late 90s for a short period of time, but it wasn’t exactly received that well. Sometimes a show needs to sit on the back burner or on the shelf for a while until it finally feels like it might be the right time to take it down and dust it off. Unfortunately it still doesn’t feel like it’s the right time, especially if it’s not going to have Tattoo. If they have a story line attesting to why Tattoo isn’t there it might be okay and easy to run with, but it sounds as though all mention of the character is going to simply be cut out, which might irk a few people who actually remember the original series. It’s easy to say they’ll get over it, and they probably will, but at the same time it’s also a lot smarter to stay as close to the source material as possible so as to avoid alienating those that might help the show make a remarkable comeback in pop culture. Anyone that remembers might need to remind some folks that Fantasy Island, the original series, has been off the air for quite a while now, and as a result memories have faded and the only thing that a lot of people are bound to remember is Tattoo’s customary saying. If not for that a lot of people might hear the name Mr. Roarke and say ‘who?’.

Okay, maybe more people will remember him than I’m alluding to, but a change as big as leaving Tattoo out is bound to be noticed. And even bringing this idea back at this moment seems as though those in Hollywood might be reaching for anything they can in order to try and keep people watching. Things aren’t that bad to be honest but the effort of bringing back old shows and revamping them so as to fit into the current mainstream seems like an effort that’s best left to those that really need something that’s going to wow and amaze the viewers. While Fantasy Island was usually a lot of fun and was an entertaining show in its time it was still something that seemed to fade off pretty quick since like many shows it had its own set of gimmicks that would keep people entertained for so long before it started feeling a bit stale. Maybe I’m wrong though, maybe this will be something that viewers want to watch.