Home
TV News
What We Know about Umbrella Academy Season 2 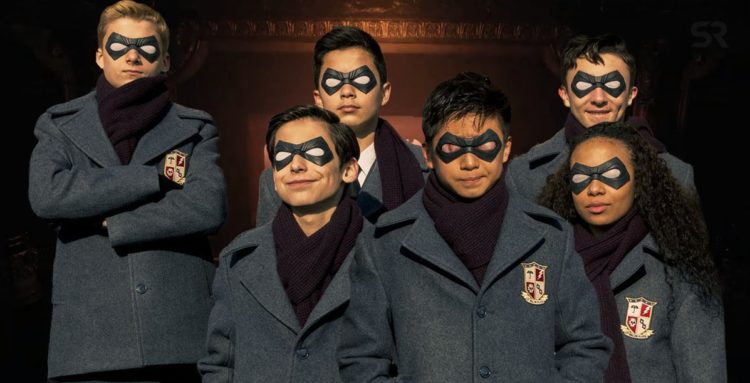 According to Jason Robbins from ScreenRant all we really know about Umbrella Academy season 2 is that details are scarce and there will be a few new faces joining the cast that don’t come from the comic book. That in itself isn’t too strange since a lot of movies have pulled new material from seemingly nowhere to try and augment the show or movies they’ve been modeled after, and it usually has something to do with the source material not being seen as enough for people or for those that are running the project. Fooling around with a series such as this however can tend to lead in a bad direction since it will affect the story at some point and possibly force it down a path that the fans might not care for or really respond to in a positive manner. But that’s for each director and producer to find out later on and so far the Umbrella Academy has been getting great reviews so it’s kind of hard to say with the utmost accuracy that it’s going to do anything but continue to perform as well as it has been.

Chris Edwards from Digital Spy has written that the show will start back up in 2020 so we’ve got a while to wait yet for it to come out, but that will give people plenty of time to catch up if they haven’t seen season 1, or it could give those that have seen it an opportunity to bone up on the first season and remember everything that happened. As far as the new characters go there shouldn’t be much to worry over since other shows have done this and have seen various stages of success even if later on they started suffering from one thing or another. The whole idea of bringing in characters that don’t belong in the story in the first place though is that they do tend to disrupt the natural arc that was present in the original story, but in some cases they can make it a bit more interesting since there are events that tend to take place that might not have had those new characters never been introduced in the first place. This has been seen in shows such as The Walking Dead when it introduced Daryl, who eventually became one of the most loved characters throughout the duration of the program. While Umbrella Academy has yet to achieve that kind of fame and notoriety it’s safe to say that if the new characters are accepted by and revered by the fans then it might be that they’re better being kept around for a while.

There were plenty of unanswered questions at the end of season 1, but it sound as though season 2 is going to start answering those questions eventually as it will hopefully begin to make a little more sense to those that might not have read the graphic novel. A lot of times this is done on purpose in order to keep people guessing and coming back for more since the enticing nature of what might come if a person continues to watch is often what’s needed to insure that viewers will continue to tune in. Some might lose interest but a lot of times a good number of people will gladly wait as long as it takes to see the conclusion or continuation of something that they came to enjoy. Umbrella Academy has shown itself to be one of the many shows that willingly left people with a few cliffhanger moments that need to be cleared up when season 2 hits. That they will be eventually isn’t hard to imagine, but how they’ll be handled is still something a lot of people are likely asking themselves whenever talk about the show comes up.

One main reason behind leaving cliffhangers though is that telling too much of the story all at once tends to kill the story in the same breath. This is why series are born, why movies end in the way they do when the knowledge that another one is coming, and why producers and directors alike seem so capable of irritating fans to no end with their lack of answers at times. They know how to play this particular game, and they know how to keep people coming back since it’s a little too easy to string some folks along and get them to wait, and wait, and wait until those in charge are finally ready to reveal as much as is possible before allowing imagination to take over. Whether you’re a storyteller or someone that just happens to know how to craft a particularly thrilling tale, the game of giving just as much as is needed to entice a person is one that some people can play and others have yet to learn. In the end though it’s all a matter of who can deliver.