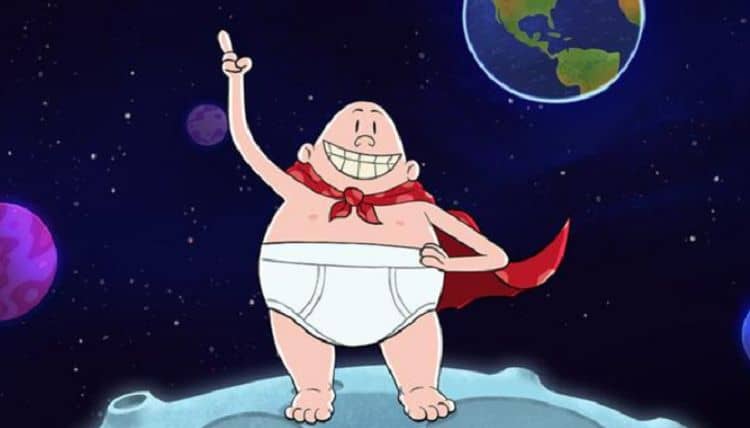 What you can really get out of Captain Underpants in Space is what you can get out of Captain Underpants in any situation: it’s a crazy show. Kids definitely love it and some parents might feel it’s a bit goofy but the point is that it gets watched and it’s become something of an interest to see a grown-up character in his underpants saving the day or some odd thing. This time however it looks as though the show is headed into space where the cast will encounter aliens, zero g, and other big challenges that are bound to make them wish they’d stayed home and perhaps never contemplate space travel again. Oh who am I kidding? The students that comprise a good part of the cast are often touted as the types that will go off and do just about anything that sounds like it will be fun and the titular hero is the kind of individual that’s just clueless enough to make things worse or somehow make them better by doing something completely unconventional. That’s the whole gimmick of the cartoon after all, to be as unconventional and as out of control as possible without crossing too many lines that might end up getting the show axed from one schedule after another.

The freedom of the show is what makes it appealing to a lot of people since there’s not a lot that can be predicted and often kids love this wild and zany ride that the show offers. In that light it’s likely going to be seen that kids will enjoy this trek into space largely because it’s not bound to be realistic or capable of holding to any believable story line since that’s not the whole point of the show. he point here is to make it as wild and out of control as possible while still keeping it within the lines when it comes to the overall story. Taking the show into space is only natural at this point it feels since otherwise raising the bar would only be a saying rather than an attitude considering that anyone can say something, but it takes a doer to get the ball rolling. In that regard one could possibly see why Captain Underpants is actually still popular after all this time and how the books took off in a big way and the show is still around. In a big way imagination is key for this story, though one could also argue that toilet humor and the types of things that kids find funny at certain ages has a lot to do with it as well. Some adults might have to check themselves a bit before condemning a cartoon such as this since the material a lot of us watch tends to be just as bad if not worse. Of course the argument there is that we don’t want our kids watching stuff that they’re not ready for, but Captain Underpants really isn’t that bad when put beside other shows that are rather controversial in the topics they pick and how they present them.

The insane nature of this show is likely what really causes some parents to think twice about allowing their kids to watch it, as a guy running around in his underpants might at first glance sound like something’s a bit off about the program. But for the most part Captain Underpants is a pretty safe show for kids and it does inspire a lot of imagination and a few good habits such as helping others and making decent decisions. Of course there’s plenty of hilarity and craziness that goes on that could be construed as problematic behavior, but there’s also the idea that there are consequences for said behavior as well. So really the major gripe that some parents might have about this show is that their kids won’t stop watching it, which is easy enough to remedy by having them go outside, play a board game, read a book, or do something that’ NOT related to the TV, or just calm down and chill since the cartoon isn’t as inappropriate as they might think when compared to many others. After all, just being strange doesn’t mean it’s bad, and yes, Captain Underpants is exceptionally strange in many ways, a watching one episode would be enough to make a lot of people raise their eyebrows and wonder just what in the world it was that they’d selected.

When a person thinks about it there have been a lot of other shows that have come along throughout the years that have been just as kooky but carried no value to them at all. Captain Underpants in Space at least holds on to the idea that it can be fun and completely out there but also teach a few lessons along the way.