Home
Movies
What We Learned from The Chip ‘N’ Dale: Park Life Trailer 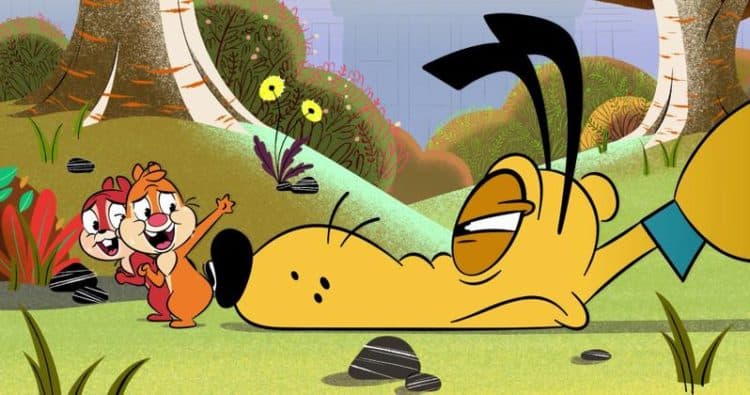 Chip and Dale have definitely changed over the years, but it almost feels as though they’ve regressed at this point since at one point in the past they never spoke, then came the Rescue Rangers, then came the appearance on the Micky Mouse Clubhouse. It feels that we’ve come full circle, or gone back to square one, after seeing what this trailer provided as far as how they’ll be seen and what will be going on. The two rascally chipmunks have been around for quite a while now, long enough that people can remember them by name, but the show that they’ve been given now on Disney+ almost feels like a bit of a backslide to their roots, when they could communicate with one another but not anyone else. So far the humor looks as though it might be edgy enough to be funny, and it’s shown in the trailer that the chipmunks will be hosting other classic Disney characters as well. Out of the many Disney characters that currently exist on the roster the two chipmunks are among the classic characters of the bunch that a lot of us remember from the afternoon cartoon block that included other greats such Talespin and Darkwing Duck.

It feels likely that a lot of us, those born before the 80s, can remember those timeless Disney classics that featured the characters that are kind of being forgotten at this point as the Mouse House piles on more and more properties with an insane number of characters to remember. In all fairness that’s kind of how things go, but it feels as though holding on to the old characters gives Disney a little more stability than snapping up other properties might be smart, especially given that spreading itself so thin might actually end up being a worse idea for the Mouse House in the long run. That could be erroneous thinking on my part, but paying attention to the core characters that helped the company elevate itself to where it is now feels like the right thing to do.

This is business though, and the sentiment isn’t always bound to be the first thought that anyone has since sometimes the old characters have to be chucked into the vault and released only when they’re really needed to remind people that they’re still there. It might sound a bit melodramatic, and it kind of is, but at the same time it’s simply how business works and how the flow of the company has worked for a very long time. It’s not easy to say whether or not this version of Chip and Dale will last, but as the Mouse House continues along it’s easy to think that characters such as these will continue to be brought into the forefront every so often in order to remind people that they’re there and to see what else can be done with them. Bringing back the Rescue Rangers might have been a better idea though to be certain, especially since the show was more than a little popular with kids thanks to the added characters and the constant adventures, not to mention the enemies that were more than a little entertaining.

But until that idea surfaces, this is what there is, and it’s likely that this will make kids laugh but it’s not sure if there’s any other point to it at the moment since the educational aspect of Disney (yes, there is one) doesn’t appear to be present. That might be a good thing since it could mean that Chip and Dale will be more of a fun break from the programs that do teach us morals and therefore impress upon us the need to act in one manner or another. This show looks like it will be pure hilarity, but perhaps there will be a few morals that it will try to push here and there, unwritten guidelines that people need to learn as they grow. However it happens, this show is pretty different than what’s been seen throughout the years but is bound to be funny all the same since Chip and Dale, especially with Donald Duck in the mix, are fun to watch, and they’re a laugh riot most of the time with their antics and the kind of things they get up to.

Wondering how many seasons they’re going to last would sound less than hopeful to some people since it might give the idea that there’s not a lot of faith in the program. But it’s simply a question as to whether the program will be agreeable to those that are bound to watch it. That shouldn’t even be a question, but with the type of animated series that are popular today, it’s kind of smart to question which shows will be around the longest and how well the audience will take to them.