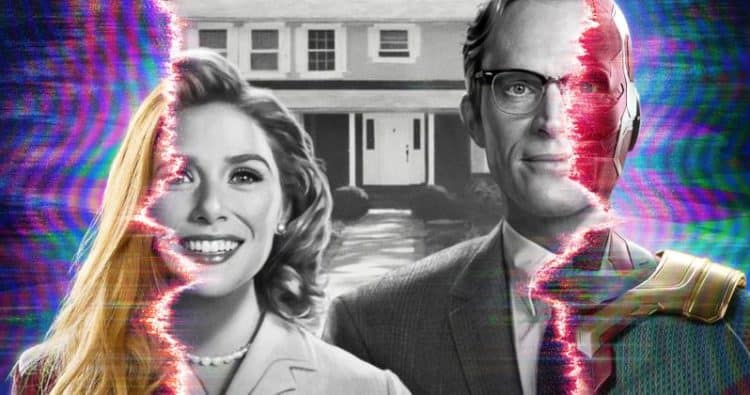 One thing that’s easy to question about the WandaVision trailer is whether or not it’s all going on in Vision’s head, which might mean he’s not quite as ‘dead’ as people think and could be saved at some point. The idea is that he’s currently still dead in canon, but whether or not he’s going to stay that way is still in question since a lot of those at Marvel appear to be enjoying doing and evading such questions and with good reason. Keeping their cards close to the chest is a habit at the MCU now since too many leaks are bound to ruin things if they happen and those that are in charge of what’s to come want to make certain that the fans will be as surprised as they want them to be. But in regards to WandaVision, it would make sense that all this is happening inside Vision’s mind since the mere act of someone telling him that he’s dead in the trailer, and the few lapses that can be seen throughout, makes it obvious that things aren’t quite as normalized as it would appear. Plus, as it’s said by Wanda near the end of the trailer, they’re not exactly the most normal couple in the world since he’s an android and she’s an altered human with mind-warping powers that were given to her by an infinity stone. So yes, their lives and their pairing are anything but normal.

But the intriguing part of this is that looking at Paul Bettany’s expressions through the trailer it’s easy to see that he knows something is wrong and that things aren’t the way they should be. But there’s that insistent need to be happy and to have a life with the woman that he’s come to care about, so one can’t help but think that he’s going to be torn between living hte fantasy and trying to figure out what’s right. As to the setting looking like something out of Leave it to Beaver, there’s bound to be a reason his mind would create such a world that he’d be able to exist within, and much of it likely has to do with the programming that Tony Stark enacted when he made JARVIS, from which Vision is derived. That feels as though it could easily be worked into the series, but that’s all dependent on the series being based on the idea that this is all happening as a dream sequence of sorts that the Vision is playing out for himself. My money is on this being the case, but if it turns out that I’m wrong I’ll definitely be one of the first to admit it.

One thing that is going to be a trip is that with Wanda’s powers to shape reality if in fact her powers will take on this form, she and Vision did have kids at one point. The full extent of her powers haven’t been seen yet, but it’s easy to think that the MCU might allow her abilities to expand and diversify, especially since the Age of Ultron her powers have been growing, as has her control. So far though we’ve only seen her move things about and destroy whatever she sets her mind to. Creation isn’t something that Wanda has been big on with her chaos magic just yet, but if the idea was to create something with these abilities in the MCU it’s likely that she could possibly be seen to create their children. That would be kind of an interesting development considering their unique pairing, and it would definitely be something that fans will be talking about. How much is being taken from the comics is hard to say since a lot of the stories have been altered thus far and it’s largely because they’ve been told before and the directors are trying to find a new way to present them to a fanbase that’s well-versed in a number of different storylines that are being adapted into the MCU.

The Wanda/Vision connection is something that’s been around for quite some time and has been the kind of love story that takes a lot of jagged turns and twists throughout the history of Marvel comics. As they’re both Avengers and superheroes it’s been treated with a great deal of respect and at times kind of stowed away to focus on other matters, but their relationship has been something that has had a continual presence that many fans have easily picked up on and have found quite interesting. After all, the idea of an android showing affection for a human is nothing new in pop culture, but there have been enough intriguing developments in this particular story over the years to keep people coming back to it. It’s definitely worth a look.