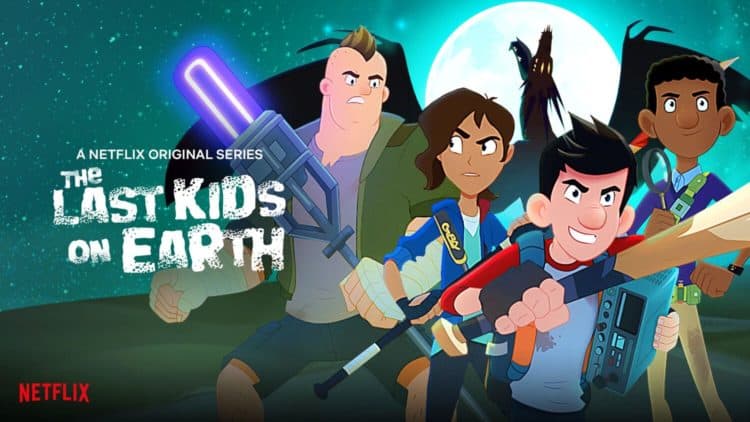 Well, one thing we’ve definitely learned from The Last Kids on Earth season 3 trailer is that every good time has to come to an end eventually, especially when the world is still being occupied by zombies and monsters that appear to come from nowhere at times. But when the Nightmare King is in town it’s even more obvious that things have definitely taken a turn for the worse since the situation for the survivors is about to become even more dangerous than it’s already been in the past. So far the show has been entertaining to say the least and has also been a lot of fun along the way. It’s definitely made the case for why kids might actually be a bit more primed to survive in a post-apocalyptic world, provided they’re animated and have just enough common sense to make a few of the right choices here and there. Thus far it’s been one of Netflix’s many shows that is popular largely because it is kind of fun and crazy, and it does have more to come according to the literature it’s been taken from. Right now season 3 should be coming pretty quickly, though whether or not there’s going to be a season 4 is, like always, up in the air until it’s discovered just how things are going to go. Even if a season 4 was given the green light at this point if still feels that a lot could happen between now and then.

The show is an engaging take on the post-apocalyptic world that is left behind during a zombie outbreak, but from the perspective of a foster kid that’s been bounced from one home to another, never finding a place he’s felt that he belongs. When he becomes one of the last survivors of the apocalypse though he ended up finding three other kids that help to form a small group that sticks together despite their obvious differences. To make matters worse though, the supernatural is tossed into the mix since monsters abound in this world, and as it’s been seen, the group has to either deal with them or run from them as much as possible. Other than that, their lives are a piece of cake since apparently they still have electricity and plenty of things to snack on, something a young adolescent would find entirely pleasing since there’s no one to tell them what to do and no one to put any restraints on them. Of course a lot of us might think that this is bound to be a negative thing at one point since through a lifetime of experience a good number of people could agree that learning things the hard way can be a drag sometimes, and for this group of kids, the hard way is one of the only ways that’s readily available.

In season 3 it looks like the group will be continuing to have a good time with their freedom until something comes along that they didn’t plan on, and they discover that they might not be as alone as they thought, which is something that Jack doesn’t appear to think is too great. It feels as though Jack might be of the mind that they were doing just fine with their foursome before the knowledge that there might be other people out there. As with any show that has to do with zombies and monsters though, one can easily bet that things are only going to get more complicated since as it’s already been seen the group dynamic is something that’s not exactly one hundred percent perfect, but it’s worked well enough at this point to make certain that they all manage to see the next day. How things are going to go in this coming season will be intriguing to see since the combination of zombies and monsters is one that a lot of people wouldn’t find too ideal, but a lot of folks would probably find pretty interesting if they’re just getting into the program. It might appear to be a bit over the top to be certain, but thankfully with cartoons there’s usually a very loose limit, if there is one at all, since the ideas are easier to put on screen and the overall story can go in so many different ways that the freedom is a bit heady. But the feel of an animated show that deals with the undead is kind of interesting since it has to follow certain guidelines while at the same time staying unique enough to keep people coming back for more.

Seeing as how seasons 1 and 2 have been entertaining and definitely tell an interesting story, season 3 should be able to keep viewers coming back in order to see how the story plays out, and it should be a wild ride.