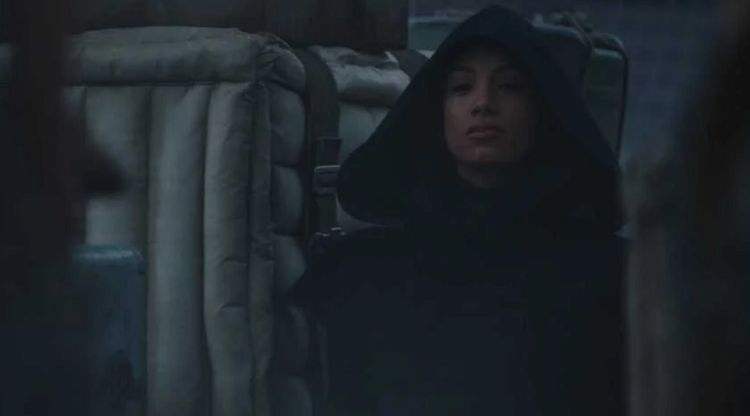 Just off the bat, it doesn’t look as though Mando is going to be having a good time of it since from the beginning of the trailer his ship appears in tatters, barely limping along with its loading ramp hanging wide open and the engines sputtering. But then what else are we going to expect? He’s on the run from the last vestiges of the Empire, namely Moff Gideon, it’s a little too obvious that the Republic doesn’t have much love for bounty hunters since watching the X-Wings lock their S-foils into attack position usually means it’s time to fight. But then, considering that they’re running to either side of his ship it does feel as though the Republic could figure that the enemy of their enemy could be a friend, even if Din doesn’t really have a lot to do with pretty much anyone he feels that he can’t trust. Speaking of that, it does look as though Cara Dune and Greef Karga will be making their way back as it’s been mentioned, and none other than Sasha Banks from the WWE will be showing up on the program as well. Who she’ll be playing is still up for debate, but since she’s seen on Mon Cala, the homeworld of the Aqualish and the Mon Calamarians, it’s likely that she’s either a spy for the Empire or someone that is bound to help Din and Baby Yoda, perhaps even Sabine Wren since it’s been stated that the female Mandalorian might actually be in the next season.

There’s a great deal of conjecture at the moment over what’s going to happen and who’s going to show up and when, but there are a few players that are already guaranteed to be there and a few that could swing the season in one direction or another. But it’s obvious that while searching for information that Din is going to find a lot of opposition since the call has already gone out far and wide to many bounty hunters concerning Baby Yoda, who appears to be wising up a bit as is seen at the moment when he closes the lid to his conveyance as he recognizes when violence is about to happen. That’s actually nice to see since it gives the character a little more depth and makes it clear that he’s learned something while traveling with the Mandalorian, namely don’t be in the line of fire when things are about to happen. It’s great to see that Din is bound to have recuperated and is back in fighting form since he’s going to need every skill he possesses considering that there are bound to be a large number of individuals that are looking to take Baby Yoda and leave Din for dead. One has to wonder just how Cara Dune and Greef Karga are going to factor into this, especially if the Republic gets involved since Cara used to be a Republic soldier.

Then there’s Moff Gideon, who wasn’t even shown in the trailer, unless he’s hidden away somewhere, and the fact that he’s gunning for Din as well with the darksaber in hand and what’s left of the Empire at his disposal. There’s no way he’s going to stop looking, and from the continued presence of the Empire in the trailer it’s a bit obvious that things are going to get even more involved as the series goes on. As far as Ahsoka Tano, we have yet to see her, and it’s not likely that there was a switch made between Sasha Banks and Rosario Dawson since one, the hood the Banks is wearing didn’t look to be concealing anything but hair, and two, it’s been announced more than a few times that Dawson would be making her way to the show. So whoever Banks is playing is bound to be important thanks to her appearance, but perhaps as we get closer to the release date we’ll get to see Ahsoka show up. It’s more than enough to get many fans excited since the trailer is showing signs that Din is bound to experience a few rough moments but also appears to power his way through them as he did in the first season.

Despite what’s already been shown it’s very easy to believe that there’s a lot more to see since season 1 made this pretty clear when it released and the story gave everyone a serious curveball in the form of Baby Yoda, aka The Child. Thinking that such a thing could happen this time around is pretty standard since those in charge definitely make it interesting and are bound to have a few more surprises up their sleeves that people aren’t aware of. But of course, that’s what makes the story interesting, and it’s why people will keep coming back.