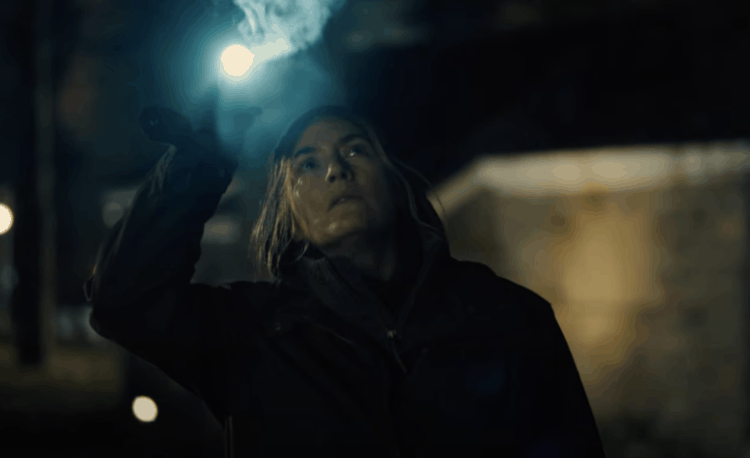 Kate Winslet looks like she’s set to give a rather gritty performance in Mare of Easttown on HBO Max this coming April, and while it looks like a lot of other shows we’ve seen in the past, this one also looks like something that could be interesting since she plays a small-town detective that has to solve a murder case and deal with her own personal issues at the same time. While the trailer isn’t giving too much away it’s easy to guess that the fact that her father died when she was a teenager and she and her mom don’t get along could have caused a lifetime of stress that she’s still trying to sort out. Tacking on a heinous murder in her small town appears to exacerbate things in a big way since she looks kind of ragged throughout the trailer and definitely rundown in a very obvious way. Added into the cast is Guy Pearce, who is usually someone that needs to be watched simply because he can come off looking like a nice and reasonable individual in one scene and then turn out to be a complete psychopath further into the movie. If he has an M.O. that would be it since the guy is good at what he does and is a smooth-talker that knows how to gain someone’s confidence before turning around to be revealed as the bad guy.

One thing about crime happening in a small town is that it puts everyone on high alert and tends to pull people together or make them leery of each other since in small, close-knit towns it’s common that a lot of people tend to know each other and a violent crime is often thought to be the work of someone outside the community. That’s almost the feel of this series, but there’s something else, something deeper that is implied within the trailer but isn’t said outright. What is very evident is that there is something troubling in Mare’s past that she’s afraid of, and it doesn’t feel as though it’s simply the death of her father or the damaged relationship with her mother. Viewers are going to have to wait until April to find out just what’s going on since already it’s a big question considering that it’s a part of what’s driving the trailer and making it necessary to look for something that’s deeper than what we’re being given. As of right now this show, which will be a limited series, is already looking like something that will be interesting enough to keep tabs on, especially since it would appear that Mare is a local hero thanks to a bit of fame she gained in her youth and that has been remembered by the residents.

That’s the thing about small towns, people tend to remember a great deal, especially when the town doesn’t have as much contact with the world outside of its borders. Some might not think that such a place still exists, but there are plenty of towns across the US that aren’t cut off from civilization but haven’t really changed with the rest of the country and are still down-home locations that are far simpler than any other metropolitan city. These places still exist for a number of reasons since people enjoy getting away from the hustle and bustle of the city and still enjoy the ability to know their neighbors and experience a sense of belonging to a community in a deeper and more profound way than a lot of city dwellers know about. While this feeling is possible in the city without question, it still has a very different feel from what might be experienced once a person leaves the big city. From watching the trailer it’s bound to feel familiar in some way to many of those that have likely lived out in the woods, or in a small town where they knew most of their neighbors. As far as the story goes, the murder would appear to be that of a child judging by the bicycle found in the river and the reaction of the grieving man that says he’ll kill the murderer himself if they’re not found. It might sound cliche, but backwoods justice is still very much a thing, though it’s something that many people won’t talk about since no one wants to be foolish enough to implicate themselves.

But from the first look, this series has the appearance of something that’s going to shake a few people and deliver a gripping, suspenseful story that will keep a lot of people on their toes. That alone will make it worth watching if only to see what’s going on with Mare and what role Guy Pearce will end up playing, which could prove to be interesting.