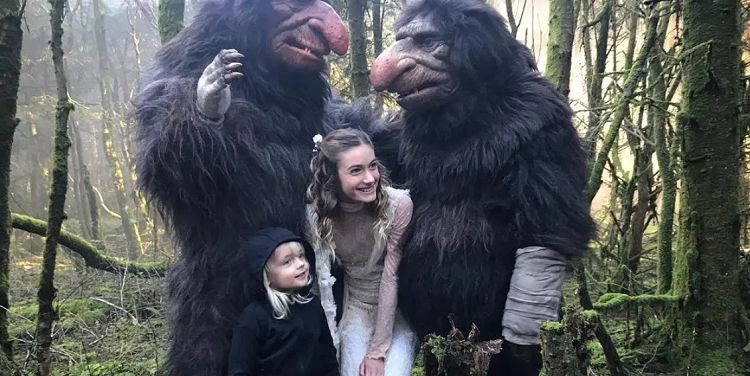 What do you tell a child when they ask where you go when you die? Some people might have a perfect answer to this question, but others are bound to fumble about a bit and try their best to come up with an explanation that kids will understand and fully accept. In The Place of No Words though it does feel as though the child that’s not fully understanding the concept is given a great way to cope and to come to a better understanding through a process that not enough of us are given when we’re younger and many might never experience simply because we have parents that tell us to keep our feet on the ground too often. But then death is a subject that many people tend to approach in a very different manner, especially when speaking to their children about it. How we go about teaching our kids about death and what comes after is an important part of life after all since it eases the idea of losing people over time and reminds children that not only is this a necessary process, but it’s not always the end if one really thinks about it. The loss portion of death is something that many people have the biggest trouble dealing with, but again, explaining it in a way that a child can understand, and giving them the means by which to cope and to follow their own path, appears to be the main gist of this story, which makes it an inspirational tale to be certain.

Some might want to say that instilling within a child the fantastical idea of death isn’t healthy, and in part, they would be right since turning them completely from the idea of death is not a healthy practice, but using fantasy as a means to help them understand, to offer them a transition that can explain the process and what is actually happening in a way that they can accept and comprehend is far better than being as blunt as possible. Kids are versatile enough in their thinking that they can grasp certain concepts that adults might think are beyond them, but slamming them in the face, metaphorically speaking, and shielding them from the facts entirely are not healthy practices when it comes to keeping kids aware of what’s happening and why death is not something to be feared but is instead a natural process that does happen. It’s not hard to see how many people would argue with the idea of not fearing death since it is largely unknown and it’s not something that people are entirely qualified to speak about since even those that have had near-death experiences or that have died are hard to rely upon since their tales are often difficult to accept. But the best that anyone can do for a child when it comes time to discuss the passing of others is to remind them that this is a natural transition. It’s not something to wish for, but it’s not something to fear either.

Those that want to hide children from the idea of death are doing far more damage than anyone could possibly be if they explain the process and give the children something to focus on other than the stark reality of what will happen one day. Hiding away from death is about as useful as standing in plain sight while playing hide and go seek, as death is a natural occurrence that doesn’t come looking for a person but will happen all the same when it’s time. The movie looks like a wonderful blend of fantasy and reality that has been used to create a long and fanciful story for a young boy that has many lessons to learn about life and death but is being given something that will be invaluable to his personal growth, and would likely stay with the character well into adulthood. The best lessons are usually the ones that we’re given when young, should we remember them, as they usually prove to be the most versatile and those that are taken to hear the most considering that they’re given to us when we’re as impressionable as we’re ever bound to be. The use of fantasy in explaining the ways of life and death is something that can ease the sting of it and perhaps even keep an individual from succumbing to the idea that it’s the end and something to dread.

Everyone has a different view of death, but one of the best things that can be done for children that have to deal with it in their lives in some way is to avoid hiding from it and give them some sense of hope that it’s not the end. If nothing else, this movie looks like a pleasant lesson for a lot of people to learn.