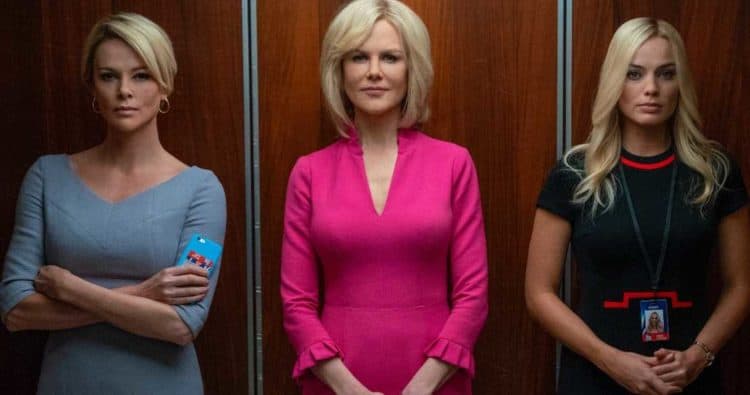 If you haven’t figured it out yet Bombshell is going to be about the scandal that was levied against Roger Ailes of Fox News by Gretchen Carlson, Megyn Kelly, and many others detailing accounts of sexual harassment by Ailes over a decade ago. While Ailes passed away in 2017 the story is still fairly well known since it was one of the biggest scandals around and one that took a while to come out thanks to what could only be described as Ailes’ vehement denials that anything untoward had ever taken place. Yasmin Omar of Bazaar goes into the story a little further as she speaks on the accusations made by Carlson and Kelly that Ailes was in fact abusing his position, docking their pay, and making advances towards them that were non-consensual. Given that Ailes had risen so high in status and power it’s not hard to believe that such a thing might have happened, but it’s also not hard to believe that the power he wielded in the newsroom could have gone to his head. In any case he’s no longer here to defend himself and it would seem that the story is moving forward and will be coming out eventually this year.

This isn’t the first representation of Ailes to come out since The Loudest Voice starring Russell Crowe as Ailes debuted not long ago and was just as vehement about his position and about his authority over those that worked for him. What was learned about this case is that an old man was essentially being accused for something that he continued to deny, and was eventually forced to resign and allowed to remain free. To many people this might be a gross measure of injustice, but given the mess that has come about since more and more women have finally started speaking up and speaking out concerning the hardships and abuse they’ve been taking for years, it’s not too hard to understand why some people are rolling their eyes and wondering why movies like this continue to persist. If you think it’s about pushing the idea of what the women have been through and showing how they finally took charge of their own lives then you’re an idealist in a big way, which isn’t a negative quality, but is still a bit naive. In the long and short of it, this movie is about the money and the chance to show once again that women are challenging the old order and are refusing to be silent any longer.

That’s a positive thing to be quite honest, as no one should ever be able to get away with what Ailes was accused of, but it’s also becoming something of a cash grab in some ways since the real-life stories have been eye-opening, inspirational, and overwhelming in a way that has been able to start shifting things as the years continue to roll on. But this kind of movie is a chance for more stars and directors to push their own beliefs and make sure that, much like a dog that’s wet the carpet, people are being made to understand what’s been done and why it’s so important to go over it again, and again, and again.  There are likely a few people out there that will disagree with this assessment, but simply taking the cues from the trailer this movie is going to be kind of brutal since the women in the elevator car will barely look at one another, let alone say a word. Silence speaks louder sometimes, but it can also be just as brutal as the words that are left unsaid since to be quite honest women have been quiet for some time, and the result has been that they’ve been seen as somehow lesser in the workplace as a result, though in truth they’ve been the backbone of many an industry in more than one way. Staying quiet has never helped a single person in the instances that have been laid bare, and as the months and years continue to roll on things are changing quite a bit as the fallout from years ago continues to be pushed on audiences.

To be fair women deserve a lot of recognition for the things they’ve done throughout history, as they’ve been there constantly to bolster the men that take a lot, if not all of the credit for even the most minor of successes. But in trying to be equal to or superior to men movies like continue to hammer home the idea that the future is female, that women are becoming superior, when in truth it’s better to think of each other as equals and move forward with this ideal. It’s fair to say that a lot of people are going to see this movie in a different light, so expecting flak is simply natural.