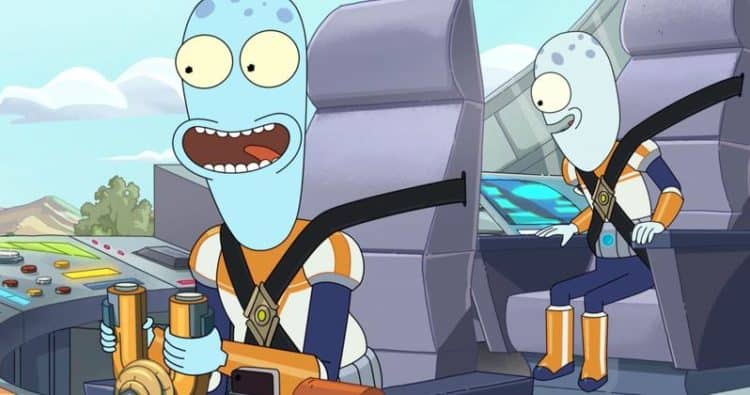 It might not be coming until March, but Solar Opposites is already making it known in this trailer just how the aliens feel about getting off this watery hunk of rock known as earth, and it doesn’t exactly feel as though the feelings are all that positive when it comes to wondering if their stay was enjoyable. The mere fact that they’re basically giving a giant finger to the earth on their way out is enough to think that they might not have enjoyed crash landing here in the first place. But the final haha appears to be on the crew since the trailer shows that things aren’t right with their ship yet and it would appear that they don’t get to up and leave at the moment. What’s going to happen is hard to say but it’s easy to think that they might have to remember what it means to actually get along to go along in the coming season since leaving everyone on earth after making it a point to tick them off with the thought of never having to see them again is bound to come back and bite them in a very profound manner. It might be that they’ll have a way around this, but it’s still funny to think that they might have a lot of fast-talking to do to some folks that they might have antagonized without mercy.

When the first season of Solar Opposites premiered in May of 2020 it was perfect since a lot of folks were starting to wonder how they were going to stay home and be entertained, so to be fair this show was very well-timed. But as of now, it’s likely that people will still take the time to watch the show so long as it’s kept entertaining, and getting off the planet isn’t bound to keep the show going for a while when the main premise was that the aliens were stuck on earth without any feasible way to make their escape. But people did enjoy the show and it’s hard to think that after only a couple of seasons that the creators would want to end it, so it’s bound to happen that there are plenty of other surprises coming in season 2 that the trailer above isn’t showing as of yet. But the initial reveal is something that indicates that they’re going to have a world of trouble coming their way if only because of their continual attitude towards the earth and its people.

It’s kind of amusing how almost every show that deals with aliens paints earth and humanity as one of the lowest forms of life around since it speaks to a type of self-deprecating humor that we’re always imagining that we’ll be outgunned, outsmarted, and basically outclassed by anything that tries to take us over. It’s easy to see why this might be though since the idea of space travel is still something that, in reality, is incredibly difficult to attain considering that no one on earth has sent more than a few highly-trained and specialized people into space yet, and yet in the movies and on TV space travel can be undertaken by just about anyone so long as they can fit in a ship. The fact that aliens in pop culture are able to do so many things that humans can’t in terms of their technology has a lot to do with imagination and the desire to see such things become reality at one point, even if it’s already been established that such things as we see in the movies would require a massive or alternative power source that simply isn’t possible in this current era. But the disdain that a lot of alien species show towards humanity definitely makes one wonder how deep into their own stores of imagination each writer needs to go to try and make it clear that as much as they might love their own species they might also harbor some deep-seated animosity towards their fellow human beings. Maybe that’s unkind, but it definitely appears to be the case sometimes when arguing the motives behind imagination.

In any case, this auspicious start to the next season is going to be an interesting way to kick things off since it will no doubt leave some people wondering what’s going to happen as others decide to just start laughing and hope not to stop. The first season was a big enough hit with plenty of people that the second might be a foregone conclusion when it comes to thinking that people will enjoy it just as much. There have been plenty of shows that have seen a successful second season, but in light of a great first season a lot of shows tend to cool off a bit in their second season, so we’ll have to wait and see what happens.