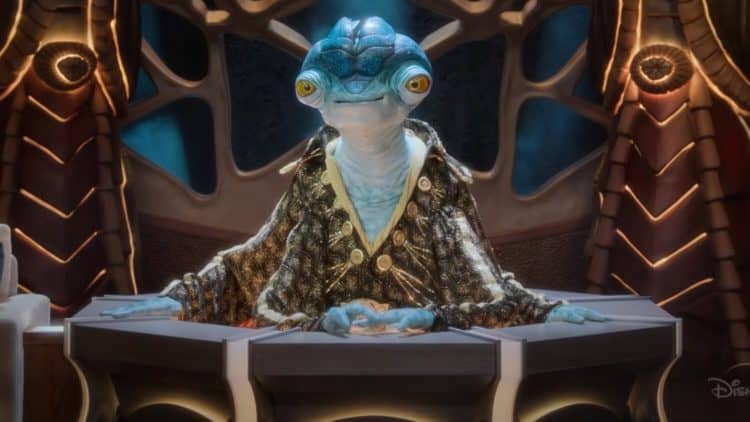 So you know how Disney+ is trying to diversify as much as possible and spreading out its influence with various shows? Yeah, Earth to Ned is definitely a swing for the fences, but we’ll have to wait and see if it’s a home run or a swing and a miss. To be fair it does look like an interesting idea for a talk show since it is different enough that it should be able to stand out, but the novelty of it might wear off after a while unless it’s able to keep things moving along and keep them fluid and dynamic enough to work. As an alien TV show host, Ned does sound as though he might be kind of chatty and friendly when it comes to entertaining his guests, but one has to wonder when the whole gimmick will be in serious need of recharging since as funny as this is likely to be it’s still Disney-owned and as a rule, it’s not likely to get too fringe, which is tough to think of when a person thinks of a talk show. A lot of talk shows are lively and have to adhere to various standards that are set down in order to keep them from flying off the rails, but at the same time, a good number of them still manage to follow their own ideas wherever they might go and there are times when things get a bit fringe anyway. Of course, that’s a matter of perspective, but when it comes to Disney it’s bound to be seen that Earth to Ned might be a lot cornier and more toned down since it’s audience will likely be kids as well as adults.

The funny part of the show is that Ned and his companion Cornelius were reportedly sent to earth to plan an invasion but instead, they ended up falling in love with pop culture and decided to host their own talk show instead. That’s rather fortunate for the earth but it does leave the question of what might happen later in the show if Ned’s people decide to come and check on him and discover that he’s been hosting a show instead of making plans for the invasion. That would be an interesting arc honestly. Each episode is going to feature a different celebrity guest so it could be something interesting for a lot of people. Along with the guests, Ned will be learning something new about the planet earth and the various cultures and practices as well, which is different enough and might help the show to grow and expand as much as it needs to in order to survive on the Disney+ network. For kids, this could be a fun and engaging show that might last for a little while if it attracts enough viewers, and for adults, it might be a good time to connect with their kids in order to simply sit down and enjoy something with the family for an episode or two.

Looking at the show from a critical standpoint it does feel as though it might wear a bit thin if the content isn’t kept updated as much as possible, but if it’s given enough attention and is kept up as it needs to be it does feel as though this show could last for a while. Saying it will or won’t is kind of difficult largely because it could happen that later on down the line a person could be proven wrong if they say remark one way or the other. So it does feel safe to say that it looks interesting, it has the kind of guests that people might be interested in hearing from, and from the standpoint of entertaining kids, it’s definitely on the right streaming network since Disney+ is doing its best to cater to its subscribers, in most ways at least. Earth to Ned could be a fun show that kids might enjoy watching and learning from if it’s delving into pop culture the way it appears to be. Whether or not it’s going to be a show that people will remember 20 years from now is hard to comment on since without knowing how it’s going to do in the long-term it’s difficult to say one way or another if this is the type of show that someone might dig out of the archives a couple of decades later or if it will still be around in that span of time. Some folks would gladly give their predictions right here and now, but without enough information as to how it’s doing at the moment there’s no real need to pigeonhole the show when it comes to gauging its success.

At the very least it looks like a fun show and something that a family can enjoy.