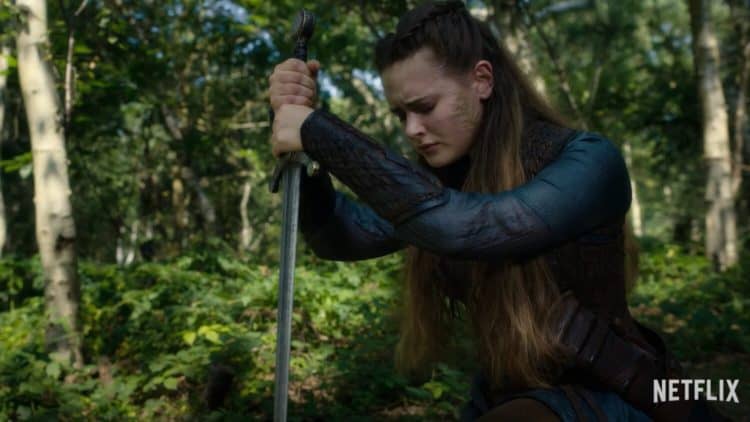 Let’s get over those first reactions before moving on, as it’s already been said that Cursed does in fact look like a feminist re-imagining of the King Arthur legend using Nimue, the woman who would become the fabled Lady of the Lake, as the legendary warrior whom the Red Paladins are attempting to kill along with every other magic-wielding or infused individual in the series. It does in a way make Arthur and Merlin look a bit ineffectual as Merlin apparently has no magic as he gave it up to the sword and Arthur is more or less a bandit that’s seeking to stay alive along with the magic folk. Into this mess wades Nimue with the magical sword that would one day change Arthur’s life and create a king of legend that many historians would likely agree is based on several different people thanks to its overwhelming ambiguity. Getting past that point however this series does look like it could be worth a watch since it’s a definite new look at an old story that might make some men bristle just a bit since it’s female-led and makes a lot of the male characters look like villains or less than useful characters. But if a person can sidestep that and realize that it’s not a personal dig at men, hopefully, and just enjoy the story then one should be able to have a good time with it.

The whole Lady of the Lake legend that goes along with the story of King Arthur is one that has been around for a long time, so in a sense no one is re-inventing the wheel, they’re simply giving another look at a classic tale that is employing Katherine Langford in a rather enticing and tragic role that will portray her as the main protagonist and therefore make her the central figure of a story that has focused intently upon one single man as its basis for a long time. Thus far it does appear to be a very action-packed series that will hopefully cover more of the legends as it goes along and give Nimue a very well-defined back story and role. Anyone looking this character up online will likely find that she has been utilized in many different ways at this point in time and has become something of a pop culture icon that still doesn’t get a great deal of recognition but is at the very least a figure of legend that has been featured several times here and there. Rarely however has she been a central figure to any story, so it’s quite interesting to see that she’ll be driving her own tale and will be made into the central character for this series. With that being said it is a hope that Langford can make this character work and won’t revert back to the same type of character that was used for 13 Reasons Why.

One reason why this is a legitimate concern is that a lot of actors do tend to bring a good number of elements from other characters into different roles. If they fit then so be it, as such moments have been seen to work, but hopefully Langford will be able to bring a bit more to this role than the sorrow that her character is meant to feel for the loss of her mother. Just looking at the trailer thus far it does appear that there might be no need to worry about it since Nimue, being a bit of a tortured character in some tale anyway, is bound to be a bit hesitant at times, but is also looking as though she’ll be a capable warrior that is bound by destiny and will walk a path that is crucial so that others can accomplish the tasks that fate has set for them. In a sense she’s a keystone character that is necessary for many other stories to continue and to begin in order to further the legend that people already know. In this way she becomes an even greater story once the pages of her life are unfold and spread out for everyone to see. That might sound a bit fanciful but the truth of it is that the story does sound enticing at the moment and it should be worth watching for anyone that wants to see a new version of an old story.

Again, it does feel like a feminist approach and it has been called that, but in terms of making an interesting tale out of something that’s been viewed roughly the same way almost every time it’s definitely worth a look and should be something that people are putting on their watch list. The worst case scenario is that you might not like it, but that doesn’t feel likely.