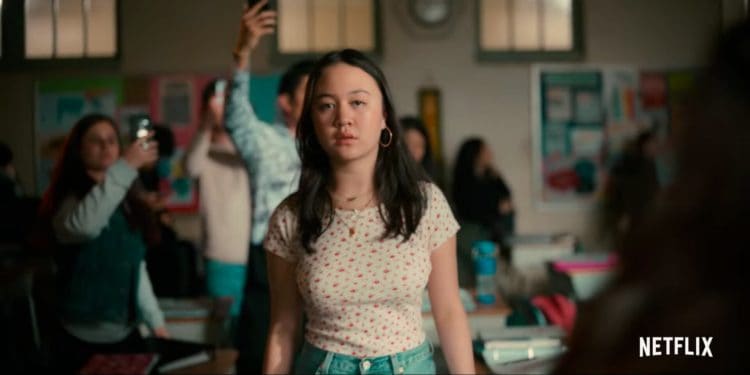 Grand Army is a chance to go back to high school in the modern era and it’s bound to make a lot of people wonder just what went wrong between one generation and the next, a constant question that’s been building and building throughout the decades but has rarely ever been given a solid answer. Life is tough, being a teen is tough, there is a racial divide in this country, kids aren’t being listened to, and so on and so forth the reasons behind why life is so difficult continue to roll on as Grand Army makes this abundantly clear with its varying imagery and the idea that POC’s aren’t being listened to and are being disregarded in mass numbers. That appears to be the message since the focus is on several school students whose experiences are both positive and negative as far as the trailer depicts depending on the situation and on how they happen to be handling themselves at that time. Three writers have quit apparently over being exploited and abuse, and without knowing everything that went on in the writing room it’s hard to say that they have no grounds, and it’s equally hard to say that they’re entirely in the right. That’s the downfall of our society at the moment at this time though, everyone wants to point fingers and no one wants to talk and figure how to fix the problem. That sounds a lot like high school, doesn’t it?

One thing that has been said and can be repeatedly pushed is that this series isn’t all about the white, straight experience when it comes to high school since the trailer does shoat that this isn’t the main focus. Some might want to scoff at that and claim that diversity is being used simply to push its own agenda, but it’s actually kind of nice to see since more often than not high school shows and movies tend to show a lot of white kids that have what amount to very petty problems. Even the more serious problems are at times due more to their ineptitude than anything else, and it becomes tiring to see the continual soap opera drone on and on. There are definitely images and scenes in this series that are going to tug at the heartstrings of many people, especially when it comes to a school shooting, kneeling for the flag, and other various ideas, but the point here is that these things are happening and whether a person believes in them or not, they’re happening because young people are seeking someone to listen to them, and something to believe in.

Grand Army isn’t much more controversial than any other show that’s come along in the past several decades since if anyone wants to look back in history and see what’s been normalized since so many people didn’t figure it was that bad, they might find a few gems that were a little problematic. Of course, if a person could stand those shows they should at least be able to admit, perhaps grudgingly so, that Grand Army is making its own point and is doing so in a manner that’s as offensive as people think. You don’t have to agree with what you’re watching, and the beauty is that if you don’t like it you can turn it off. But this is likely to be met with a lot of derision from the ‘woke’ crowd since simply turning away is, what they might claim, what people have been doing for years, as others whose lives have been ruined because of racism, exclusion, and bigotry have been ruined because no one wants to admit to the issues and deal with them as is needed. That’s a lot to lay on anyone over a TV show, but in reality, it is the truth that those that choose to look away and claim that it’s not their problem aren’t entirely wrong, but they’re not entirely right either. The show is already bound to rub a few people the wrong way and it’s very likely that no one cares since it’s going to be delivering several points that many people will no doubt listen to and tend to agree with.

Let’s say it this way, Grand Army is a look at a set of truths that many people have to live with and many more are bound to be interested in seeing and learning more about it. Some might change the channel, some might ignore it entirely, and others might attempt to state that this isn’t real, no matter how close it comes. It’s a show that’s meant to promote real life, and one that is being used for shock value as much as any movie has ever been. Like it or don’t, that’s up to you.