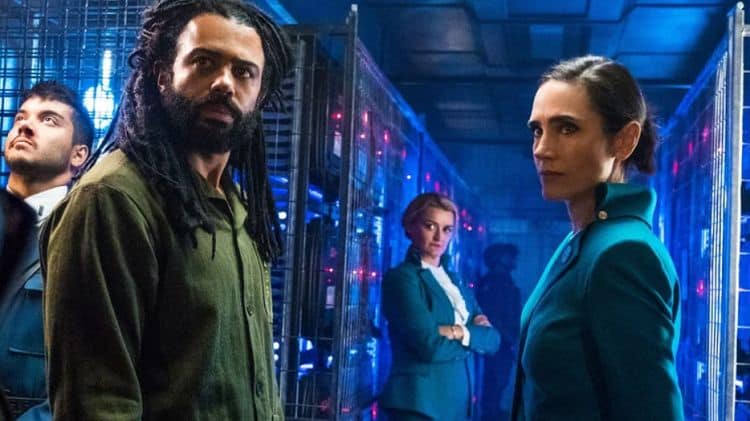 If you’ve seen Snowpiercer the movie then you have some idea of how the TV show is bound to go since it’s not too much different apart from the time period in which the show will be set. Erik Pedersen of Deadline has more to say on this matter. The movie went far into the future as the train had already been in operation for quite some time and it finally came to grinding halt when Chris Evans’ character found a way to push to the front of train, which was expressly forbidden thanks to the strict social hierarchy that had been set in place. This show will take place seven years after the calamity that leaves the world coated in ice as the train will have been operating for a short time but long enough for the social classes to have been set up among the survivors and a fierce but desperate need for each class to thrive and understand their lot in this current life. There are bound to be a great number of similarities between the movie and the show, but one thing that will definitely stand out is the idea that the classes will be attempting to figure themselves out no matter that seven years is long enough to learn that some on the train count more than others and that things are not right among the passengers.

Reading up on the show it also feels as though we might get to see a bigger delineation between the classes that reside in each car as we’re given a better understanding of who belongs to each caste and what their responsibility is to the entire train. One thing is clear though, those relegated to the back are for the most part seen as human refuse and treated little better as they’re kept in the back by force and coercion in an attempt to show them their ‘place’ in the grand scheme of things. If you can remember from the movie there were children taken from the tail section to work the train’s engine, keeping it going as it were, and the rebellion that Curtis helped to create was planned all along by his father-figure Gilliam and the headman of the train, Wilford. This might make it appear that there’s more harmony on the train from the start, but the truth of it is that the most disturbing part of this entire train ride is that it’s little more than a cycle of death and rebirth that keeps the human race alive but also keeps them in check since the living quarters can only hold so many people and the equilibrium needs to be kept in order to avoid running out of viable foodstuffs and having to resort to cannibalism, which those in the rear of the train had to in order to survive in the movie. Joe Carter of Action Institute has a little more to say about the movie.

Thus far from the trailer for the show it would appear that things haven’t gotten to this point yet, but they do look fairly bad as the prospect of freezing in the tail end is very real and the idea of moving up is almost non-existent for many passengers as they are given their designation and expected to be content with their lot in life. In a way Snowpiercer is a very dark bit of commentary on our lives when it comes to societal structure since when the stuff hits the fan it might very well be that in order to preserve the status quo some people might look at this as a how-to manual more than a dark fantasy in which people turn on one another and impose a hierarchy that would likely crumble at the first hint of rebellion. It does make more sense that if the world were to end that the strongest and most well-equipped would take over and the ability to rely on government and law and order might take a backseat to who can take what they want and how far others will go to defend it. The story of Snowpiercer is one that has a lot to do with the illusion of control and the ability to see past the social trappings that human beings have deemed to be so important for so long, while trying to survive in a system that has been rigged to give advantages to those that are willing to sell their fellow human beings down the road and ignore the suffering of the many to enjoy the pleasures that are afforded a few. Before anyone wants to start comparing similarities to real life however let’s get one thing straight, this is fiction, while in real life people can still move up and down the social food chain based on their own efforts.

All in all this series already sounds interesting and could be a nice lead-in to the movie once it’s all said and done.