Home
Entertainment
What We’ll Miss Most about MAD Magazine 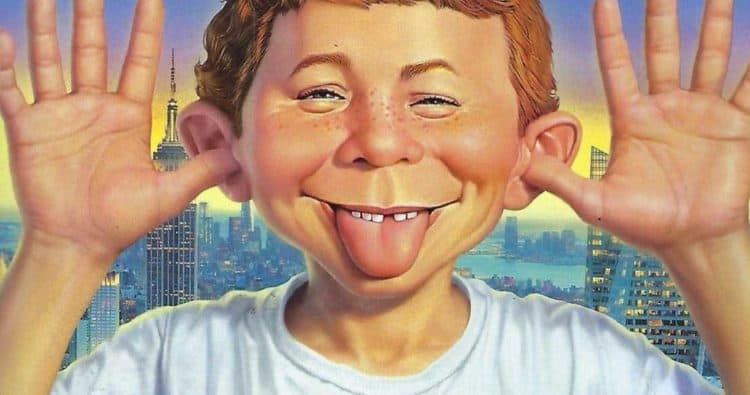 It’s the end of an era as James Whitbrook of Gizmodo seems to be getting at. While MAD magazine isn’t exactly dead in the water it’s going to cease publishing new content very soon and will no longer be the magazine that a lot of us remember. This is kind of a saddening time as the magazine has been running since the 50s and has almost always come up with brand new and engaging material that’s been able to make just about anyone laugh so long as they had a sense of humor. MAD has satirized so many different shows, movies, and parts of society that simply imagining it going away is kind of depressing. It’s not the end of the world obviously but it is a piece of our childhood that’s changing just like anyone else, for those that ever read the magazine at least.

Marc Tracy of The New York Times is of the mind that MAD has fallen to its own hubris since for quite some time it seems that the publication has been losing its relevance and hasn’t really stayed in touch with the world around it. In fact some would claim that it lost touch back in the baby boomer era and has been struggling to stay up to date with society ever since. In this day and age MAD simply can’t compete since it’s been supplanted by so many different forms of entertainment and is no longer the cutting-edge source of hilarity it once was. Even back in the 80s the magazine was still insanely funny and had a chance in hell of competing with the movies and other publications that were emerging. In fact if anyone can remember, Cracked magazine was a serious contender at one point and had their own mascot that was every bit as goofy-looking as Alfred Neuman, but wasn’t quite as well known.

But the years haven’t been kind to the magazine and as the decades have rolled by the world just kind of forgot that it existed. Even the emergence of the TV show couldn’t really bring back that much prominence since the show took on a life of its own and left the magazine behind. There are definite aspects that are going to be missed, such as Spy vs. Spy and The Lighter Side Of…, but the parodies of the movies and the TV shows are likely a big part of what some people are going to miss since they were usually quite detailed and made a simple kind of sense in how they made fun of each one. In a way MAD was almost like the first Honest Trailers for movie, albeit in print. They pointed out inaccuracies in a fun and engaging manner, they made fun of things that didn’t make sense, and they definitely showed little to no mercy when it came to their form of satire. This was made the magazine so great though, they were willing to go after just about anyone and anything in order to spread the laughs and weren’t shy about how they did it.

To think that anyone in their 40s or 50s never heard of MAD magazine and wouldn’t understand a reference from it is kind of hard to believe, but those that are currently in their 30s and younger would no doubt be hard-pressed to remember anything of the publication unless they’d been reading it up until now. It’s almost too unbelievable to think that the magazine will be reverting towards publishing old material rather than going out and making fun of new and engaging subjects that we’ve become so used to. But factor in the idea that YouTube and the vast number of people that have their own channel now use satire and facts side by side to offer entertainment, and that technology has replaced the need for written comedy, and you get the idea that MAD simply can’t compete any longer. Even being reverted to digital media form doesn’t seem like it would be the answer, though many people might wish and hope that it could be.

It would be kind of pitiful to claim that this is ruining our childhood since despite the fond memories that many of us have of MAD there’s a good idea that a lot of us haven’t picked up an issue in a long time, and for those that have, it’s hard not to agree that it might be losing its relevance. It’s still funny, there’s no doubt about that, and to those that still get the jokes and the references it’s a bag of smiles all around. But being that MAD just hasn’t been able to keep up it seems like it might be time to hang it up and remember the good old days. At least there’s always back issues to look at.