Home
Comics
What You Need to Know About DC’s “Dark Knights: Metal” 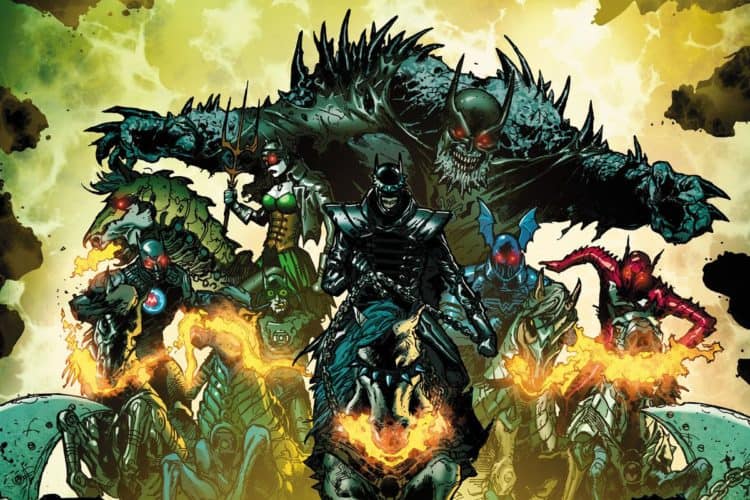 DC comics fans are in for a real treat with Dark Knights: Metal, a once in a lifetime comic event written by Scott Snyder, penciled by Greg Capullo, inked by Jonathon Glapion, and colored by FCO Plascencia. Metal was published starting in 2017 spanning from June all the way until March, 2018 with a total of 6 issues released on a monthly basis. Metal brought Snyder and Capullo together again after their acclaimed New 52 Batman series, which is a culmination of The Court of Owls, Death of the Family, Zero Year, and Endgame. So what exactly do you need to know about Dark Knights: Metal? While there are bound to be spoilers for a bit of this comic event, I will try not to go into too much detail for those that may not have read it. However, you have been warned for any potential spoilers that you may see here.

Dark Knights: Metal is a comic event that introduced the idea of the “Dark Multiverse” into the post-New 52 comic continuity. The idea of a dark multiverse came directly from Snyder himself, who became fascinated with the concept of dark matter, after watching the “Cosmos: A Spacetime Odyssey” science documentary series with his then five-year old son. The basic idea of the Dark Multiverse is that there exists another Multiverse alongside the traditional Multiverse that we’ve already known about. This Dark Multiverse essentially functions in the same way that this current Multiverse does, but with even more, much darker possibilities.

So, what exactly is Dark Knights: Metal all about? Well, without going into too many spoiler-y details, Metal opens up with the Justice League (Superman, Batman, Cyborg, Wonder Woman, The Flash, and Green Lantern) as they are in an intense arena-style battle with Mongul. After defeating Mongul, they return to Earth to find Challengers’ Mountain sitting in the middle of Gotham City; upon entering the mountain, they find Kendra “Hawkgirl” Saunders who warns them of a full-scale invasion with Batman at the very center of it. Batman has been investigating something without the Justice League’s prior knowledge, and is now being targeted by Barbatos. Apparently, Batman has been treated with four out of five divine metals and has been searching for the fifth metal, “Nth Metal,” to stop himself from being able to be used as a human doorway for Barbatos and his army to launch their invasion. As it turns out, Batman actually wanted to go to Challengers’ Mountain, because he knew that they had Nth Metal, so he stole it and went into hiding from the Justice League. After a period of time spent searching for him, and with the help of Green Arrow, Zatanna, Constantine, and Blue Beetle, who unfortunately were unable to locate Batman themselves, Cyborg was the one to locate the entire Bat Family including Damian Wayne, Nightwing, and several others. Apparently, Batman was going to use Baby Darkseid (yeah, Darkseid is a baby now), to send him back in time and defeat Barbatos using Hawkman’s mace. Unfortunately, Batman was lured into a trap and where he thought he was in the Tomb of Prince Khufu, he was actually in the Tomb of Hath Set, since Kendra destroyed the Tomb of Prince Khufu decades ago. Then, the Strigydae and the Court of Owls appear to treat Batman with the final metal (known as Batmanium, because, of course it is), thus opening the doorway for Barbatos, and the rest of the Dark Batmen, allowing them to enter into their realm. Barbatos then wipes out Superman and Wonder Woman without so much as a slight hesitation.

That’s where I’ll stop going into detail with the story for now, since I don’t want to give away any other details that you may be interested in learning for yourself. Overall, I’m loving this take on the DC universe and I think the dark and ominous tone that is given by both Dark Knights: Metal and Dark Knights: Death Metal is absolutely fantastic – it’s definitely not what you’d expect from something like a traditional more light-hearted Marvel movie, and is much more intense than quite a few other DC titles as well. I could definitely see a Dark Knights: Metal and Dark Knights: Death Metal animated movie being a perfect start to a DC Black Label movie-verse, and I’m really hoping that we get an animated adaptation of both of these comic events sometime in the near future. If you love the dark side of Batman, you’ll definitely have a great time with Dark Knights: Metal.