Home
Movies
Whatever Happened to the Cast of American Pie? 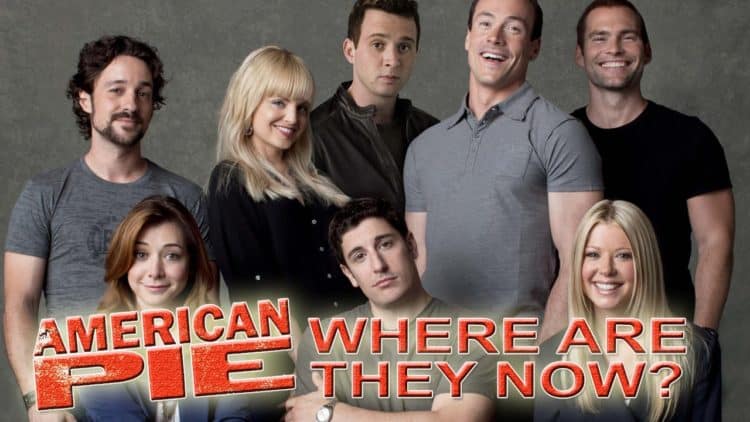 In 1999 a movie came out that kind of summed up what adolescence was about during the 90s, in some ways at least. American Pie grabbed the attention of the viewer and took off running in a dozen different directions at once while still holding true to the one core belief that change was coming and it wasn’t always in the most pleasant of ways. From Jim’s hopeless antics while trying to get laid to Stifler’s unending parade of insults and constant feud with Finch, the movie and those movies to come that held with the original idea were absolute comedy gold when it comes to how much people enjoyed them. The progression of the story was great, the characters were over the top but still believable, and the whole idea was great enough that people in this day and age still talk about the movie and deliver quotes verbatim when it seems feasible. Much as Animal House did its job for college movies all over the world, American Pie did the same for high school.

So what happened to the cast?

Eddie has gone on to be one of the more noticeable faces of the franchise as he’s been seen in the Harold & Kumar movies with his costar John Cho, and he’s been quite popular on TV as well. As Finch he was the highly intelligent but somewhat annoying brain of the group that still liked to have fun. Watching him and Stifler go at it was one of the best parts of the whole movie.Â  He’s also on the show “Scorpion.”

So quite honestly her part isn’t that big but it does factor into the main story since she’s Jim’s love interest and the one girl he’d do anything to get. But after this her career kind of hit a plateau it feels like as Scary Movie and Jay and Silent Bob Strike Back seemed to have been two of her crowning achievements. She hasn’t done a lot in film for a few years but she’s still present on TV. She was the woman every guy wanted during the movie.

Heather wasn’t the outcast but she also wasn’t considered to be on Nadia’s level, or even Vicki’s. But she turned out to be one of the best women in the series since she and Oz just kind of hit it off and became the cutest couple. Mena has taken on several roles, a couple of them controversial in a way, since her time in American Pie. Her roles in American Beauty and Spun are kind of off the wall, but she’s managed to make them believable all the same. As of 2018 she’s still active and still quite good at what she does.

If not for his hair going gray you might think this guy only ages a year for every five to ten. Eugene Levy is a legend in show business and has been one of the driving forces behind the American Pie series since he’s been around it since day one and has even stuck around when it went beyond the original borders. He’s the funny guy that insinuates himself into a lot of scenes simply by giving a look or making a quip that you can’t help but bust up laughing at. While he has had serious roles as well as comedic he’s shown that he’s equally good at both and that’s why he’s such a great actor.

It’s hard to know what to think about Chris Klein since he seems on the verge of becoming a great actor and then seemingly slips into mediocrity once again. In We Were Soldiers he was great, but then he did Street Fighter: The Legend of Chun-Li, and a lot of fans were kind of thinking “what was he thinking?”. He’s got the talent it takes to get on screen and make things happen but that nice-guy attitude he brings with him so often got old in the American Pie movies and it’s played out everywhere else. In Rollerball, a remake of the original in a way, he actually got to be more aggressive, and it was great.

Kevin was kind of the voice of the group, the mouthpiece that had a lot of heart but eventually wasn’t really the central figure. Since his time in the movies however Thomas has stayed fairly busy up until recently since he hasn’t been seen much in the past year or so. He’s still out there doing what he does, and despite what critics might say Walt Before Mickey was entertaining if not altogether honest in its telling. One thing critics don’t seem to like to do is part fiction from reality when making their judgments.

Tara’s reputation and career kind of went through a twister after the American Pie series. Like Mena and Chris she didn’t show up for the third installment of the franchise, but thankfully they all came back for the fourth and, hopefully, final movie. But if you’ve been paying attention then you’ll know that she was in Van Wilder and she achieved even greater renown by being given a part in the ridiculously popular Sharknado series, which is just wrapping up with part 6.

Michelle was kind of the big surprise that people didn’t see coming unless they went to band camp where, one time, they… Well, anyway, Michelle was definitely one of those characters you didn’t expect much from but should have since she was so persistent. After the film she was seen on Buffy the Vampire Slayer, the TV show, and then went on to shows like How I Met Your Mother and other shows. She hasn’t been seen in movies in the past couple of years but she has remained a popular character when talking about the franchise.

The Stiffmeister was a jerk through and through but he had his redeeming qualities since he always loved hanging out with his boys and getting into trouble somehow. Sean William Scott was on a roll for a while and through movies like Bulletproof Monk and the Rundown he was primed and set to be a big Hollywood star. Then things seemed to unravel and he started taking smaller and smaller roles as time went on. He has been making a comeback in recent years with the Goon movies, and he’s still a great actor. It’s time for him to come back and really show people what they’re missing.

Ah, poor Jim. He was so desperate to have sex but was just so hopeless when it came to getting what he wanted. Jason Biggs has been quite busy since the movie and has seen a lot of success but has also had to take a back seat at times in his career. He’s one of those actors that pops up when you’re not really expecting him and makes your day since he is good enough to go just about anywhere. But to be honest his role in Orange Is the New Black was perhaps one of his best to date.

Really you can say that every single one of the cast from American Pie are doing just fine at this moment.