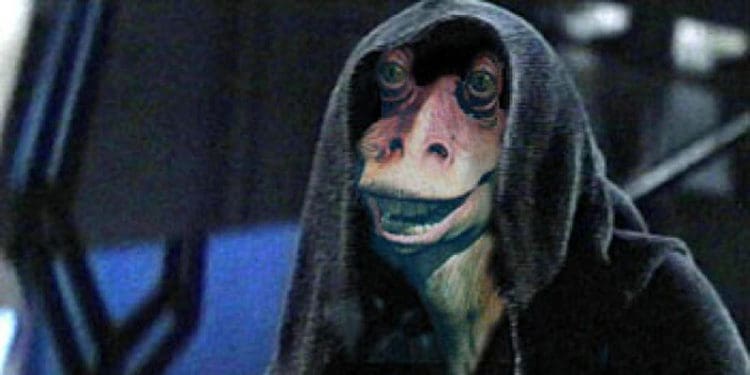 There’s a reason why Star Wars fans get such a bad reputation sometimes and what happened to Ahmed Best, the actor that played Jar Jar Binks throughout the prequels, is just one of many reasons why some folks wrinkle their noses when they hear ‘diehard Star Wars fan’. As Meg Bucholtz of Looper reminds us Jar Jar was absolutely reviled when the prequels came out since he was thought to be a racist stereotype and a useless character all around given that he was clumsy, spoke with a strange accent, and didn’t appear to really do much other than get into trouble and then somehow luck his way out of it. Seriously the character was kind of a goof but he was still a character that managed to become a part of the story even if he was a little overplayed and given a bit too much screen time. Jar Jar wasn’t the worst character ever created for Star Wars, but Ahmed’s life kind of fell apart thanks to the fans that couldn’t keep their more base emotions in check as they said whatever came to mind no matter how harsh or unforgiving it was. Some people even joked that a Gungan genocide was needed to purge the Star Wars movies of the aquatic species, and some even went so far as to attack Ahmed directly.

Believe it or not there were fans that actually liked Jar Jar, though they were hard to find thanks to the overwhelming hatred that was levied at the character. Michael Jung of Screenrant has something more to add to this idea. A lot of Star Wars fans lost their minds when it came to what they would accept as part of the canon and what they wouldn’t, and it hasn’t changed. The current actors have been given a good deal of hell even now, and of course Rian Johnson has been blamed with ruining the entire franchise. I’ll admit to not being a fan of Johnson’s but even as a fan of Star Wars it’s kind of petty and ridiculous to think that one person could destroy a franchise that’s taken decades to build. He didn’t make the best movie, that’s easy to admit, but he certainly didn’t bring the whole thing crumbling down. And Ahmed Best did as he was directed when creating a zany and kind of goofy character that wasn’t much help but was still there to help out. Why people felt the need to level such hatred at the character and the man behind the mask is kind of hard to reason through, especially given that they still ended up watching the second and third episode all the same. But of course many ‘superfans’ would justify this by stating that they watched the movies for other reasons and though it was difficult they did their best to ignore Jar Jar. It wasn’t too hard really since after The Phantom Menace the most he ever showed up was in the animated series, and there was no Ahmed Best to blame at that point.

The fact that things became so bad that Ahmed struggled with suicidal thoughts is proof that a lot of folks don’t know how to handle their fiction and for one reason or another can’t find something else to do with their time. Marcus Gilmer of Mashable has more to contribute to this. Ahmed had to wrestle with the thought of killing himself just to make the intense hatred and comments stop, but thankfully he’s still around even though Jar Jar has still continued to taint his career since there’s no shortage of people even now that are willing to give him flak for it. One might think that a couple of decades would temper the intense hatred enough to allow people to realize that Jar Jar wasn’t a hateful racist stereotype and he certainly wasn’t the worst character to ever come along. But of course some people can’t let it go and there are still those that believe that ruination of the franchise started with the prequels and culminated in The Last Jedi. There are even folks that believe that the only ‘real’ Star Wars movies belong to the original trilogy. This kind of short-sighted behavior is astounding really since these tend to be the people who think they’re ‘woke’ and can see more than those around them, when in truth they have the worst case of tunnel vision out of anyone. Making a person’s life miserable because you didn’t enjoy their character isn’t being ‘woke’ in the least, it’s a sign that a person has a narrow view of the world and very little experience in how things really work when it comes to show business or even life. So yes, Jar Jar wasn’t the greatest character and he was kind of awkward, but he’s a part of Star Wars canon now, so the haters need to step back finally and let it go.