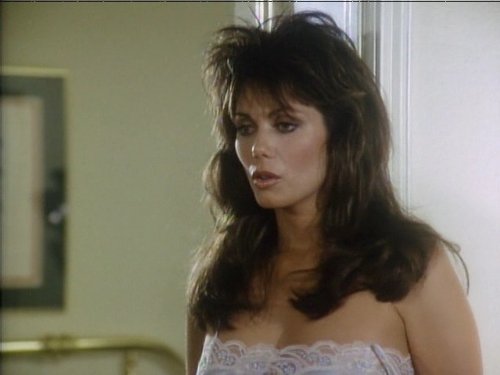 Someone that’s been a beauty pageant winner such as Deborah Shelton is usually going to be selected for the clout that her title carries and obviously for her looks since let’s be real, any woman making her way into such a contest is bound to be extremely attractive. But unfortunately it doesn’t always mean that said individuals can act their way out of a paper bag as the saying goes. Thankfully for Deborah though that doesn’t appear to have mattered much since for decades now she’s been doing her thing in movies, on TV, and making appearances wherever she can. It’s true that a lot of people might have to perform a Google search to find her, but the point is that she’s out there and she has done quite a few things in her career that might not have catapulted her into mega stardom but have still managed to keep her in the business and moving forward. It’s kind of interesting to note that one of the biggest reasons she entered into pageantry life was to spite an ex-boyfriend apparently. Anger can be a serious motivator when turned in the right direction, and there are times when it even manages to burn itself out and leave behind something kind of impressive.

Following her pageantry days Deborah went on to acting without much hesitation as she’s been a star of several movies and has appeared on various shows since the 70s, and for all intents is still doing it as there’s no mention of her retiring just yet. Without trying to be unkind age has really started to show on her, though throughout the years she did manage to age very gracefully and has been one of the more attractive women in show business for quite some time. For this reason it’s kind of easy to see why she would be cast so often, as her sexual appeal is likely to have generated the kind of attention that her movies needed at times. That’s not to knock her acting abilities, but like it or not, sex appeal in the movies is something that sells in a big way and it’s a quality that helps a lot of actresses move forward. If not for sex appeal then strength of character, wit, sense of humor, and many other qualities are looked at, but with Deborah her looks are the first thing a person sees, and as many of us know first impressions tend to be what many people go off of when it comes to actors. People can deny it if they want, but before anyone gets too carried away, think about how Deborah has appeared in many of her roles, and then think of Kathy Bates of now. Who appears sexier by societal standards? That’s the way of it, the physical appeal held by some individuals is often how they get jobs, though thankfully many of them throughout cinematic history have been able to act.

Calling her a B actress would be fair since it’s better than calling her a nobody, or a former anything since too many people focus on calling people former this or former that. It’s a gentle reminder of course of what people have done in the past, but in some cases it’s also a reminder that their glory days are behind them, when in truth their glory days are one more reason why we still have honors and moments that we do within show business and every other performative act. She’s a part of history in her own right and has made it possible for others to follow in her stead, no matter how big or small her contributions might be compared to others. What any actor adds to the overall impressive nature of show business isn’t to be discounted just because we can’t always recall who they are or what they did. Memory is an easy enough thing to pull up at this time since the internet has a long, extensive history of many people that might have been overlooked by others. All it takes is a few keystrokes to find her and discover what she’s done and why she carries at least a hint of importance in the business. It’s when that realization is reached that we tend to find that the people we didn’t know about, or didn’t think about much, are a little more interesting than we would have initially believed.

The fact that Deborah is still going strong at the age of 71 indicates that she’ll be done when she’s good and ready or when she simply can’t do the job any longer. It’s uplifting to see older actors sticking around since it reminds us that we don’t have to quit doing what we love just because we get older. Sometimes the love of the job is enough.