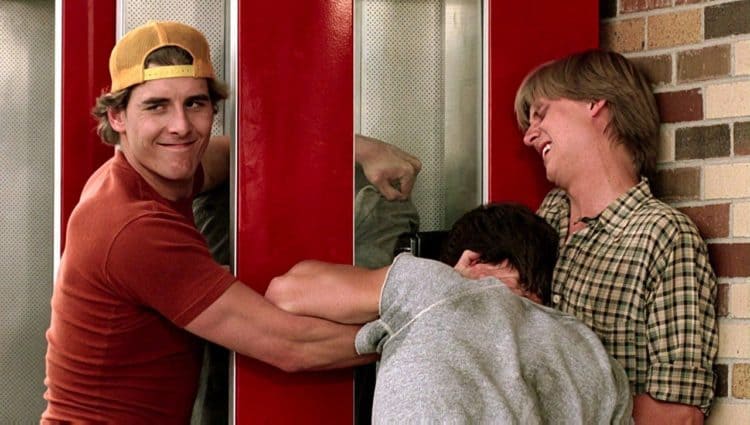 If you don’t remember John Laughlin it’s not much to worry over since to be realistic he’s played a few forgettable parts in the movies when he was younger and has done the same in TV as he’s gotten older. He’s still been a part of the business to be fair and he has gone into directing at one point so it’s easy to think that he’s made his way honestly and worked for what he has. If you can remember An Officer and a Gentleman then try to recall the bar fight in which Richard Gere, as Zack Mayo, takes down a bar patron that decided to confront him out in the street for no better reason than because Zack and his buddy were favored by a couple of local girls and because there was a general hatred of Navy personnel that mingled with the locals at times. Needless to say, Zack put the character named Troy down pretty quickly and that’s where his involvement in the movie ended. Apart from that, he’s also been in Footloose with Kevin Bacon and a few other movies that he added to his resume over the years, but it does look as though he has been working steadily for quite a while and as such deserves the kind of respect that anyone who has managed to stick around so long deserves.

Hollywood is full of individuals that have stuck around for a long time and are only brought back for small roles now and then, but much like supporting actors, they’re important because they tend to provide background for the various movies that people enjoy even if they’re not fully noticed by everyone. Laughlin is definitely one of those that can go without being noticed as he is kind of a common character that can be used in many different ways and can fill a lot of different roles. It’s not an insult to say that it doesn’t matter what role he plays since it means that he can audition for nearly any role that calls for a character of indeterminate age and race considering that he’s a perfect placeholder that can pop up in a movie or a show and complete a role and be gone when they need him to be. Fixtures such as this are sometimes hard to find even with all the different degrees of talent in the entertainment industry since a lot of people want to be the star, they don’t want to be the backup for anyone. But throughout the years it’s obvious that Laughlin has been able to quell the need to be on top since he’s played quite a few roles that haven’t really gained a lot of attention but have still helped to round out one project after another. That’s what you would call teamwork, as well as a healthy ego since if he’s ever been disappointed with his place in the movies and in TV he’s never made a stink so public that it made a newscast.

There’s no doubt that it’s difficult to find a place in a movie or a show and not be the one that’s getting all the attention, but so long as the opportunities and the paychecks keep rolling in one would think that everything might be okay and that there’s little to nothing to worry about. It’s true that Laughlin might have wanted more when he was younger and that he might look back and think that if he’d done or two things differently that he might have reached stardom in a much bigger way, but at the moment he can state that he’s been a part of several memorable movies that people obviously remember and have enjoyed. The amount of ego that exists in show business is hard to fathom sometimes, but it does feel as though a lot of folks that aren’t the lead stars and that simply fill in from time to time tend to take this in stride and don’t let the fact that they were in the same movie as some of the biggest stars go to their heads. Some of them do, and this is kind of obvious since some folks will actually try to bank on the idea that they starred with this or that individual at one time, but many others will keep those memories to themselves most times and bring them out when someone asks, meaning that they remember the good times, but aren’t about to push them on anyone in an effort to stay famous.

The honest to goodness truth is that John has been a supporting actor at best for many years and an extra for much of his time in the business, but he’s done what he could to stick around and build a career, which is inspirational all on its own.