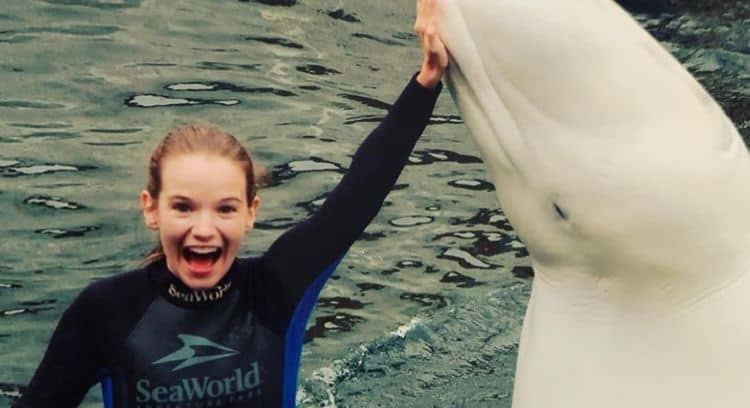 Looking back on the shows that people enjoyed in their youth it’s fair to say that some folks are a little embarrassed and some are well aware of what they used to watch and don’t care what people think. Hey, we watched what was amusing and pertinent to our life at that time, and a lot of us enjoyed those old shows in a way that made sense at the time. Taking a look back now it’s obvious that we can say that some of those shows were a little goofy and a bit off in their humor at times, but they worked when we were kids. Kay Panabaker was one of those that starred on Phil of the Future and was likely someone that people enjoyed while she was on the scene. But as it happens, people grow up and grow out of certain things, and it would appear that Kay grew out of the love she had for acting at one point since she did end up leaving the business at one point to pursue other interests in her life.

Instead of continuing on with the life of an actress, Kay became a zoologist and zookeeper instead, finding her passion by working with animals and posting her encounters to her Instagram account frequently as she’s found her place and thoroughly enjoys what she’s doing. The fact is that some actors get into the business for one reason and find out later on that they don’t really have the same passion as their peers when it comes to being in front of the camera, and might do what they need to for a paycheck and little else. It’s not always that obvious when an actor is fed up with the business, since some folks are very good at what they do and are able to tamp down the irritation or displeasure that they have with the job long enough until they find a way out. But Kay did manage to find other work in front of the camera before she decided to move away from Hollywood life.

The questions that many people have when it comes to a star leaving the spotlight usually center around why they would leave in the first place, and Kay’s answer was pretty straightforward. She’d lost the love for it and didn’t want to continue with a career that she didn’t care about. That’s pretty wise really, and while Kay’s career wasn’t the most stellar in the business she was still someone that had a possible future if she’d wanted it since unlike thousands of others she’d been given a chance to show what she could do, and was able to stick in there for a while to show that she had the talent. Some folks might actually think it’s a waste that she left and proves nothing except the idea that she couldn’t hack it and didn’t want to admit as much. The truth behind such a belief is that many actors have come to the business thinking that they would enjoy what would come to them. Some did so out of curiosity to see if they could do it, and others were there for other reasons. But those that have bowed out have done so for many reasons. But the lack of passion is one that makes far more sense than people might think.

If a job becomes a job, then it becomes work. While that might make sense to some, the idea is that if you’re not happy at your job, you won’t do the best possible job that you can. That’s not entirely true really, but having a passion for the work one does is still important since it enables a person to work as hard as they can to do the best they can. Each and every job is like this, no matter how filthy it is, no matter how it’s seen by anyone else. Work is work, and often it’s important and serves a purpose. But having a passion for the work one does is important as well, since looking past the filthier part of any job is easy when one actually has the passion needed for their line of work.

Kay went the direction that felt best for her, and it doesn’t sound as though she’s bothered to look back much unless one counts fond memories that remind her where she’s been and what she’s done in her life. A lot of us do this from time to time, even if the memories aren’t all positive. Like many of the lucky folks out there, Kay found her calling and her passion, and she just went with it. There’s no doubt that she looks back now and then to the moments that helped her to get where she is, but it doesn’t sound as though she’d trade her current calling for anything.