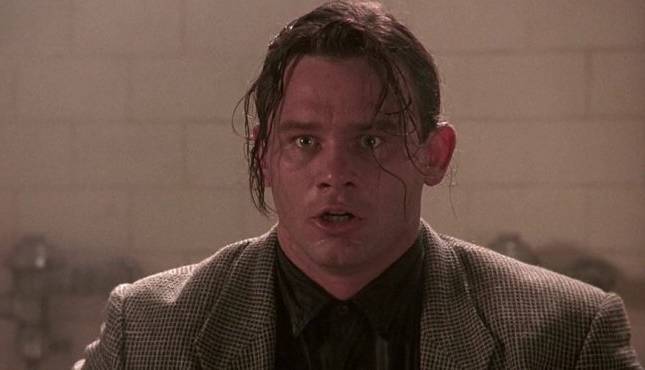 Richard Tyson is the kind of actor that some folks might make a big deal about since his filmography is extensive and he’s worked alongside a few of the most famous names in Hollywood, but he’s usually been a bit-player, the bad guy, or someone that’s unfortunately kind of easy to forget. For those with great memories it might be easier to remember him since he has been in the business for a while and it’s rather easy to see that he’s been a hard worker and has done his part when trying to make the various projects he’s been in memorable. With that being said however there are likely a few folks that might take a look at him and truly wonder who he is. That’s not too surprising since despite being in a lot of movies at this point in his career Tyson has usually been the guy in the background or a face that shows up for a brief period of time before getting lost in the shuffle or being done with the picture entirely. To say that he’s made a career that he can be proud of is easy enough since he has a long list of appearances that have made him worth talking about, but in a lot of cases he’s still kind of there and gone without making a huge impact on the story.

One movie that people might remember him from is Kindergarten Cop, in which he played the lead bad guy, Cullen Crisp. This movie was a lot more memorable thanks to Arnold Schwarzenegger and his hilarious antics, but Tyson was there and he was the main bad guy, though it’s usually tough to make anyone look that awesome when Arnold is the hero. It’d be easy to say that Tyson is someone that’s never been given much of a chance to excel, but looking at his film credits that argument kind of dies out quickly since he’s been around for a while and if there’s any impediment to his career it’s that he might not have impressed the right people at the right times in order to stick around long enough to be a lead character in a blockbuster movie. He’s definitely been among the people that are there to help the leads look good and to provide another warm body to utilize when it comes to making a movie feel just a little more complete, but in the long run Tyson is the kind of guy that needs to be talked up essentially because saying nothing about him would allow the guy to fade to the background yet again without being noticed as much as he should be.

For being someone that only shows up in various movies for a short time, or isn’t as memorable as others, he still has an impressive net worth and is definitely living a comfortable life. While you might have to look up just who Tyson is and what he’s done, it’s a certainty that despite a little bit of legal trouble he is still living the good life. As his bio states he’s still working and has a slew of projects that have either been completed or have been scheduled for a release later this year or in 2021. Obviously like anyone else he’s probably doing what he can to stay busy at the moment since the COVID-19 virus has everything on lock down, but to see just how busy he has been and still is remains kind of impressive since like many other actors his name is fairly prominent when seeing who’s working and who isn’t, but once again it’s likely that some people might have trouble remembering him. Another classic scene however would be the interrogation room from Something About Mary in which Ben Stiller is being questioned by the two detectives that have him in custody. If you can recall this was a great bit of comedy since the hitchhiker that Ted (Stiller) picked up was a noted murderer, but had left his latest kill in Ted’s car. When the two detectives, the angriest of them being played by Tyson, tried to question an oblivious Ted it appeared as though he was being completely casual about killing a person, which left them flabbergasted and, in Tyson’s case, angry enough to slam Ted’s head into the table repeatedly as he simply lost his cool. If you haven’t seen that movie then it might be worth watching at this point since that one scene is absolutely hilarious.

In all seriousness, Richard Tyson is a genuine actor and is someone that worked his way to where he’s at now, but as I’ve mentioned more than once, getting lost in the mix in Hollywood is kind of easy. At the very least he’s earned a comfortable living throughout the years.