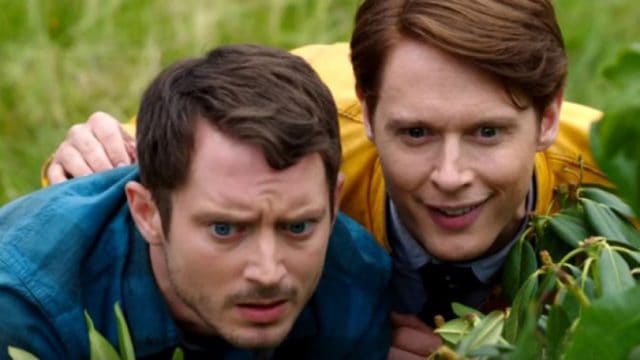 Fans of supernatural sci-fi stories have a lot of series to pick from these days. But Dirk Gently holistic detective agency is unique compared to other stories appearing on other networks. What makes the series stand out from the crowd is its universe that has been exclusively centered on the intriguing power of coincidence. This quirky show has become so popular that the planners at BBC America have announced the roll out of Dirk Gently Season 2. Fans will be treated yet again to another show portraying the incredible chemistry between Samuel Barnett and Elijah Wood. Apparently, the show will keep its signature style in this season involving the comedic escapades of the absurd, hyper and the eponymous detective called Dirk Gently.

The trailer clip (above) is out already but is barely comprehensive to tell what is expected in the new season. Here is what is in store in the upcoming season.

The cast has hinted that season 2 of the series will do away with body swapping and time travel that dominated much of season 1. It is also going to be action packed more than the previous season. Jade Eshete and Hannah marks have confirmed the adrenaline inducing action in the new season.

Prepare for a lot of unexpected twists

Season 2 is going to leave fans blown up when a lot of the cast starts where they were not expected to be in the first place. For instance, Amanda Brotzman will have her fictional illness less talked about in this season.

Characters will grow so much in this season

There are more new characters in store for season 2. The first one is Bugsberg which is a fictional town located in Montana. Another one is the town of Anonia whose purpose and the location is yet to be known. There is simply going to be more magical fantasy lands in season 2. Also, we are going to be introduced to Black Wing — a government agency that will capture the malcontents and put them in control.

It is going to be a little dynamic, from the superhero show to an inspirational show for everyone

This season will be appealing to the average person. It is more of a reality and every person is represented because it is trying to shift from the overly powerful out of reach superheroes that are surreal. It will inspire people who are validated to take over their lives and turn the validations that otherwise doesn’t mean a lot to them. To put it correctly, the new season is going to be a down to earth show that relates to all viewers.

The show will be renewed and it will be on Netflix

The show is set to be renewed for the second season. However, two more episodes are expected in season 2. It is set to begin airing in The United States in October 2017 and is likely to debut on Netflix later on in December 2017. But that is going to be only possible if BBC doesn’t release weekly drops contrary to the yearly format settings.