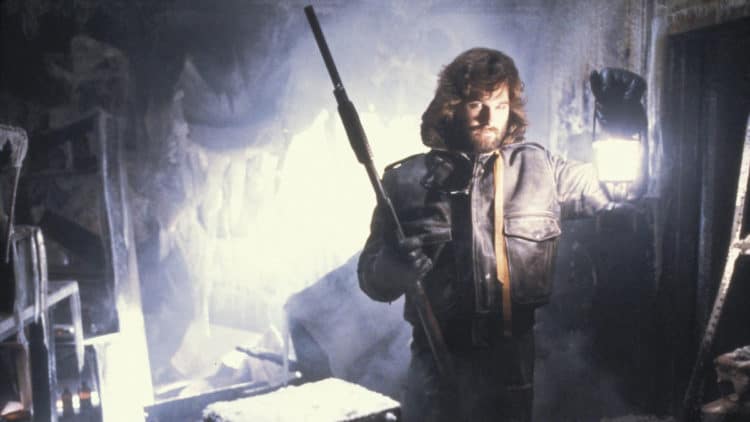 Seriously, just to get this out, an entire generation is not defined by a single individual, but those that were born in the 80s or 90s and haven’t watched the movies from either era since they grew up watching movies that were more up to date and likely had better effects, sometimes don’t understand why the movies of either decade were, and still are, so great. The young woman in the video has managed to make several of these YouTube clips and they’re all pretty funny since her reactions are priceless sometimes and the looks she gives are great considering that it shows that she’s not fully understanding why some of us that were born before the Millennial era still look back and laugh our butts off as we enjoy the older movies. The Thing is one of those that a lot of us were either grossed out by, or terrified of, or laughed uproariously at since it definitely featured the many things you just don’t do in a horror movie. What’s really funny about it is that some folks that were born after this movie was released still don’t get that this movie and several others kind of wrote and re-wrote the rules when it comes to horror movies. There’s a good reason why some folks aren’t really creeped out by horror movies, and The Thing is one of the many because we’ve seen it and we’ve learned that in horror movies there are things that you JUST DON’T DO.

Her comment that alluded to “trust the dog” when the husky was running through snow being fired upon was hilarious since those of us that have seen the movie probably didn’t even trust the dog when we first watched it. A lone dog running through the snow being chased by a helicopter and being shot at and having bombs dropped all around it should be a huge red flag to anyone, even a dog lover, ESPECIALLY when it’s a horror movie, that something just isn’t right. Then there’s the way the dog is acting. Some might chalk it up to stress and the shock of being chased, but then of course the big reveal comes that the Americans have just let something insanely deadly into their midst and it’s something that can change its shape and kill pretty much anything it touches. How many people in real life would react with “Hell no, time to bail” instead of trying to figure out who they could trust and who they couldn’t? On top of that, it’s likely that in this day and age things might be handled very differently if a spaceship was discovered, along with something that looked like a melted wax dummy with several extra appendages.

It does feel a little unfair since this young woman’s reactions are kind of comical since she doesn’t know what’s coming, and her expressions are just too much since she’s seeing this for the first time. If you get a good laugh at this video you should go and see what else she covers, such as The Princess Bride, Blazing Saddles, and many others that helped to make movies what they are today. These types of reactions are better than the movie in some instances since those of us that have been there, done that with these movies can’t help but wonder if we were the same way when we were watching them for the first time. Some would say yes, of course we were, while others might say of course we weren’t. But the truth is that it’s very likely that we were as creeped out by this movie as anyone since it managed to get pretty gory at some points and didn’t spare our sensibilities when it came to getting weird. But some older movies did have a few moments when they were fairly disturbing since they were a lot more lenient when it came to certain subjects that are considered a bit too much for certain sensibilities these days. For instance, Blazing Saddles, a parody that was poking at racism and other issues without cease, has greatly offended some people today, even though it was made by one of the only men in the industry that could possibly get away with such a thing, Mel Brooks. The Thing didn’t really feature much in the way of offensive material, but it is likely that it would still be viewed by many that have never seen it in a way that would be described as comical.

What’s even funnier is that with better special effects and a story that was meant to explain the original movie, The Thing prequel didn’t come close to living up to the terror that the original provided. Somehow, even with CGI, the prequel just couldn’t live up to the challenge that the first movie threw down so long ago.