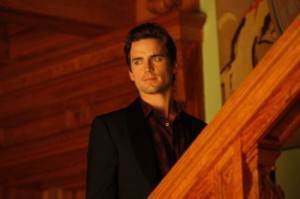 Let’s just get this out of the way first: The actual case narrative and the guest stars in ‘Countermeasures?’Not so good. I like Billy Dee Williams as much as the next guy, but this was not his strongest performance and the guy playing Jonas Ganz was also messy. Moreover, there was a point about 45 minutes into the episode when I realized I didn’t really know and/or care what the heck was actually happening with the narrative. Neal going undercover was fun as usual, but it felt like ‘Countermeasures’tried really hard to keep zigging when I expected it to zag and zagging when I expected it to zig. I don’t mind the occasional random twist, but this episode seemed to have two or three too many of them.

On that level, I found this episode to be a fairly substantial disappointment. I was just not invested in what was going to happen with Williams’Ford or the Ganz character.

However, the implications of these events for Neal helped make ‘Countermeasures’much, much more enjoyable and interesting. Though this is a USA series and therefore doesn’t require or include a whole lot of character development, especially in such a short amount of time, White Collar has done a good job of allowing Neal’s current circumstances influence his overall outlook on life. Obviously, he was this thief with a heart of gold from the beginning, but it is apparent that Neal’s time with Peter and the drama with Kate, the music box, etc. has taken a toll on his perspective. And I don’t really mean that in a bad way.

In season one, Neal probably would have let Ford sneak off and then subsequently cover up for him to Peter. I don’t think he would have participated in some of the maneuvers Ford took in this episode, but in the end, he might have just let it be because of some misguided loyalty to con men and the honor among thieves. That isn’t necessarily the worst thing in the world because that’s the world that Neal comes from, but Neal isn’t the same guy as he was at the beginning of the series. He might pretend to be subversive to Peter’s wishes and outlook, but when it comes down to the end, he’s going to be there supporting Peter’s directives and making sure he does the right thing. There’s been a greater sense of trust between the two of them in the second half of the season and along with trust comes change. Neal now has a stronger moral compass and finds the differences between right and wrong to more black and white than just shades of grey.

Thus, with Ford’s reappearance and dedication to the whole ‘one last job’shtick, Neal starts to recognize that he actually has a future outside of his time with the FBI and he’s going to have to make a choice about what kind of man he wants to be. Peter always gives him the pep talks about not being an evil person as part of his makeshift father role, but it seems like all that’s finally starting to sink in. Neal has done a lot of good in the world since coming to work with Peter and the FBI and theoretically, he could stay on as a consultant even after getting the bracelet off. Of course, he could also use all the tips and tricks learned from Peter to create even better long cons.

But at this point, I think it’s going to a take a lot for Neal to take back his trust in Peter, Elizabeth and to a lesser extent, Diana and Jones. He doesn’t want to end up like Ford, always chasing the last job or one final score, even if that means being a more subdued, boring guy living in one place with a family or something. He might not have Kate, but Neal has a major support structure around him that is legitimately dedicated to making sure he knows what decisions to make, but now and in the future.

It’s nice to have an episode that seems to be a moderate failure on the basic levels still work on a more macro, ongoing sense. The series has done a nice job with Neal this season and I only hope the writers continue to make him a more well-rounded individual and not just a sly representation of Matt Bomer’s inherent charm. Not that there is a whole lot wrong with that, but you know what I am saying.