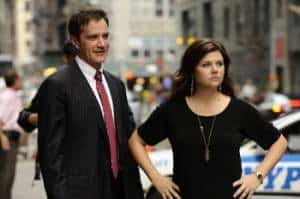 After a week off White Collar returns with ‘Payback,’an episode that probably won’t stand out amid some of the season’s best but still had a lot to offer. Series like this, with fairly stagnant week-to-week storytelling – and I don’t mean that in a particularly bad way – always benefit from recurring villains and supporting players. Burn Notice, for all its narrative flaws, is pretty damn good at cycling through some fantastic villains who pop up once a season to raise some hell for Michael, Fiona and Sam. These are characters that don’t have to be involved in the larger ongoing narrative, but still serve as fun antagonists for 43 minutes every season.

‘Payback’tries to kick off that approach for White Collar* by bring back Matthew Keller, who first appeared in last season’s ‘Bottlenecked’and although the character isn’t especially interesting or well-portrayed by Ross McCall, I still think he served a nice catalyst for a fairly entertaining episode and a few little solid beats for Neal.

*I think he’s the first returning hell-raiser. Correct me if I’m wrong.

There’s a lot about Keller’s reappearance here that’s groan-worthy: His ridiculously cushy prison set-up, his terrible monologues that are laced with chess references, his desire to literally play chess with Neal, I could continue onward. I would really pay someone at least $50 to remove all chess metaphors out of Hollywood dialogue. Anyway, Keller isn’t that interesting of a character and the episode even states outright that he’s not as impressive as Neal. There’s never really much malice behind what Keller says or does even though Neal tries to convince the FBI and us at home otherwise. He’s basically here to kick off the action and then randomly appear to spit out some awful dialogue, which isn’t necessarily the worst thing in the world.

Moreover, I do think Kelller’s appearance allowed the episode to briefly touch on an obvious theme the writers have been interested in exploring in the back half of this season: Who is Neal Caffrey? He’s lost Kate and is apparently ready to really move on from all the drama surrounding their relationship. He’s much more willing to follow Peter’s lead and he’s basically stopped breaking the law unless it’s necessary to help a friend like he does here in hopes of freeing Peter from his kidnapped position. As a former rogue partner of Neal’s Keller points out how Neal has now basically started acting like a ‘lawman,’one who has left his criminal life behind in hopes of moving on/growing up/whatever else you want to call it. I don’t think this is going to be a massive part of the end of this season or even into next season, but I do like how the series is slowly hinting at the fact that Neal has changed and started to explore what that means for the people from his past and those in his present.

As far as this episode’s actual plot goes, I can’t really complain too much. Having Peter be kidnapped obviously raised the stakes for everyone at the FBI, Neal and Elizabeth and that’s fine. The Burke’s fight was noticeably manufactured and dumb in hopes of making Peter’s kidnapping seem more desperate and sad, but I liked that the episode continued to poke fun at that by having both Neal and Mozzie laugh off the stupidity of Peter and Elizabeth’s argument in the first place. There really isn’t a whole lot the series can do with Elizabeth on a weekly basis and so I cannot really bring myself to complain too hard about the lightweight false drama this episode tried to create with their fight and his subsequent kidnapping.

However, if only because their relationship is more established, I thought Neal’s reaction to Peter’s kidnapping was great. I’ve noted before that I think this season has been good at avoiding any sense of false conflict between the two of them and it has instead focused on their real, father-son-esque relationship. Therefore, I totally believed that Neal would do whatever it takes – including getting rid of his super-pricey engagement ring he planned to give to Kate – in hopes of saving Peter’s life. And it’s not like Neal’s reaction to the kidnapping was especially melodramatic or anything. He reacted within reason with the right mix of emotion and reason and that’s good enough to sustain a fairly straightforward plot like this one. I also enjoyed the fact that Mozzie was a bit worried about Peter as well, that was a charming little touch.

And I can never complain about an episode that includes a guest bit for Adam Goldberg. He always brings a stupid amount of crazy and charm to even the smallest of roles and the little touches with the scarf and the horrible gun-holding made the character fun for the short time he was on-screen. I’d actually prefer to have his character return again before we saw Keller again.

With only two episodes to go, I imagine that White Collar will offer up better efforts than ‘Payback’before the season is over. Nevertheless, this is still a breezy little episode that I can find little to complain about.