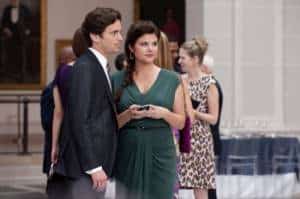 When you have two fantastic leads like White Collar does, that can get you through even the worst of episodes or any sort of gimmick. ‘Power Play’might use a gimmick device in its storytelling, but it is certainly not one of the series’worst episodes. After last week’s middling and disappointing effort, ‘Power Play’is a tremendously strong and entertaining episode that sets up what should be an explosive finale. I was particularly impressed how this episode balanced the case of the week – with Peter and Neal switching roles/lives for a few days – and Sara’s return and the refocusing on the hunt for Vincent Adler. Usually, USA series wait until the end of a penultimate episode to set up what’s going to happen in the finale, but ‘Power Play’had a few scenes along the way that made the final pay-off feel earned enough.

Like I said, having Neal pretend to be Peter and Peter pretend to be Neal is a total gimmick, one that not all series could pull off with such grace and fun that White Collar does here. When well-executed, gimmicks can be fun and that’s most certainly the case here. As I watched this episode and totally enjoyed all the scenes with Diana and Jones hazing Peter for the various things he has to do while posing as Neal, I began thinking about the cast’s chemistry and how it compares to other television series. And honestly, I’m not really sure what other series features a group of people who get along so clearly and easily like White Collar does. When Diana and Jones are clowning Peter or when he gives some of it back to Neal when he talks about how ‘Peter’has ‘married up’with Elizabeth, we can totally tell that the cast is having a good time playing those scenes out and it completely adds to the believability of the bits. The identity swap could have been played as an awkward fish-out-of-water kind of tale, but the episode went for gags and laughs from the very beginning and it was never not funny. The plot itself worked really well, but it was so much more enjoyable because of those throwaway lines and bits about the swap.

Moreover, even though it worked completely on a humorous level, I thought Neal and Peter’s swap continued to extend this half season’s thread about Neal’s future and how he’s changed. He’s spent a number of episodes this season talking about the future and moving past Kate and this episode was really no different. We could tell that Neal saw some of the benefits of being Peter, most notably the structure of the job and having the beautiful, supporting wife (of course, Peter saw the fun in Neal’s way of life too). Thus, by the time this episode ends and Neal realizes that it’s probably time to take a shot with the unbelievably charming Sara, it feels earned. He might still be searching for Adler in hopes figuring out why exactly Kate was killed, but Neal is really ready to move past Kate. Series like this usually don’t ask so much of their lead character as far as development goes, so I’ve actually been really impressed with how willing the Collar writers have been to make sure Neal actually grows and develops.

Plus, who doesn’t love Richard Schiff? The former West Wing star has popped up on so many USA series that it’s hard to keep track, but he was well (read: sparingly) used here in a nice little case about insider energy trading. This felt like one of the cases the writers would have dedicated an entire episode to in the first season and it would have been a bit boring. But with the fun identity swap gimmick, Sara’s return and the hunt for Adler, Schiff and the plot didn’t have to carry much weight and that’s fine.

As for the search for Adler, like I said, I enjoyed how the episode made sure to address the developments throughout the episode and just not at the very end. Of course, those developments were not particularly interesting and randomly had something to do with possible Nazis and just all sorts of weird stuff I didn’t totally comprehend, but anytime I get to see Mozzie in some kind of miner’s hard-hat doing research in the dark, I’m smiling. It looks as though Alex is distant family member of this Nazi person, so she’s in trouble and the crew is going to have to save her from Adler. I’m not sure how that brings us any closer to a conclusion of the Kate mess, but I don’t suspect season two of White Collar season two ends on as big of a cliffhanger as season one did. But that doesn’t mean I’m not very excited for next week’s finale.