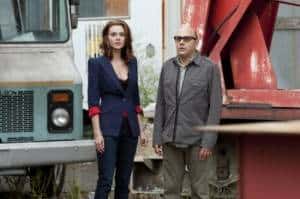 I have noticeably mixed feelings about the season finale of White Collar. On one hand, ‘Under the Radar’was a solidly-execution to the Adler story and all the drama that’s been driving the series from the very beginning. On the other hand, it features yet another problematic cliffhanger from a series that seems destined to produce problematic cliffhangers.

I adore White Collar, I really do. It was on my top 25 of 2010 and had I more time before this episode aired, I was going to write a piece about how it was far and away the best series in USA’s current stable of programming. I think there’s really no question about that. But for whatever reason, this series has a problem with its cliffhangers. This might sound weird, but I think the White Collar writers try too hard to make their cliffhangers cliffhanger-y. With any cliffhanger, there’s an obvious intent to shock and surprise the audience, hoping those feelings with convince them to come back for more in the next season or half-season. But good cliffhanger writing balances the shock value with logic, believability and character consistency. The White Collar writers have clearly nailed the first half of the equation, but they’re still figuring out how to execute the second half.

This whole season, especially the back-half, has been all about Neal’s changing perspective. He’s slowly put Kate behind him and grown to recognize that there is some value in the work he’s doing with Peter and the FBI. When his sentence is up, he could return to a life of capers, cons and crime or he could (presumably in this world) continue to work with the FBI, catching the kinds of people he used to call friends. During the series’Paley Fest panel the other night, EP Jeff Eastin said that Neal is inherently bad trying to be good, but I think it’s the exact opposite. Without question, Neal Caffrey is a good guy. He’s made some questionable decisions over the years, but even during his most ‘villainous’periods, it doesn’t appear that Neal was too bad. Sure, he didn’t want to get caught by Peter and the FBI and did all he could to avoid that fate, but it’s not like he was a vicious murderer or even particularly aggressive in his con-work. And before this episode, it was pretty clear that Neal was leaning more towards ‘good’rather than ‘bad.’

But the cliffhanger of ‘Under The Radar’betrays all that work the season has done. Adler’s been taken care of, the nonsense with Alex and the music box is now complete, but now Peter believes that Neal stole all the precious art found in the Nazi submarine. And as the final scene of this episode suggests, Peter might be right. Whether or not he actually did the stealing himself – a question that is more problematic based on the note and key left in his apartment – Neal knows exactly where all the art is. It’s in his possession and he’s told Peter that it’s not, so the trust built up over the season is now gone. Perhaps Neal has been running a long con this whole time, perhaps he just stumbled into this and figured it was best to get his final, bloodless revenge on Adler for killing Kate. But nevertheless, this is a troubling development.

It might just be my personal hang-ups that I think Neal betraying Peter sucks and undercuts the last half-dozen episodes of development. I understand that this series is probably going to run for a while and having your sneaky lead character become completely ‘good’by the end of the second season isn’t the best kind of ‘development’for a series that could go 80 episodes. But even separate from that, this feels like a cliffhanger that the series is going to have to back away from, just like they did Peter’s conversation with Kate or Mozzie’s shooting (which was admittedly less problematic and more just obvious). The point is, I don’t know as if season three works if it’s all about Peter trying to catch Neal in a lie or a mistaken secret. That feels like the first few episodes of season one. It’s a retread. And if the story doesn’t go that way, it will probably involve a quick conclusion to what happened here, with a Neal apology, some wise cracking, etc. and then onto the case of the week. That is a cop-out. Of course, the series could pull out an entirely different exploration of this cliffhanger and I’ll be wrong. But even if I’m wrong in July, I’m not sure that makes me entirely wrong now. This cliffhanger is still a bit sketchy, and the series needs to stop doing it.

But as you know, that was just the last five minutes. Otherwise, ‘Under The Radar’was pretty great. I suspected that the series would somehow skirt around any substantial developments with Adler or quickly get rid of him under the guise of introducing AN EVEN BIGGER THREAT like Burn Notice likes to do, so I was pleasantly surprised to watch the narrative unfold here. Andrew McCarthy got enough screentime to be chew some scenery and be evil and the story wasn’t short-changed at all. I really liked how this episode tied Adler, Kate, Alex and the music box all together without making it seem completely hackneyed and contrived. I mean it’s a little contrived, but I’m willing to go with the fact that Alex has known way more than she’s ever let on. Despite my issues with the cliffhanger, the first 40 minutes of the episode did a great job of concluding the last two seasons of stories and wiping the slate clean for what’s to come in the future. White Collar will only be gone for four months, but I kind of already miss it, mediocre cliffhangers or not.